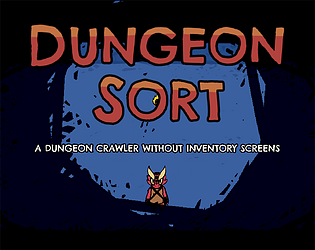 Really like the art style of this. I like the idea, but I think it needs a little bit of give. Like maybe being able to push a button to cycle through your trail of items.

Good art! Interesting concept I would only recommend a little more work in combat mechanics.

Well done ! I was wondering about an RPG without an inventory system myself. My idea was to have minions about who carry things for you, and which maybe you could direct to do things for you as well ("hey you with the key, open that door"). But that was not something I felt comfortable doing in two days. :-)

I like that you can throw things, rather than just drop them. But maybe throwing has extra uses ? Like throwing a key at a locked door unlocks it ?

Good art! But it just makes the inventory system more tedious and I don't see any value added to the experience.

it's not really an improvement on the inventory screen. it makes it more tedious, not more interesting.

Great concept! The inventory mechanic worked really well, in my opinion. At first, I was kind of annoyed with the number of items I had to cycle through constantly, but after a while it became more of a search for the "perfect system" (for me, that was a key if I had it, sword, torch, then treasure). I was considering leaving the treasure behind at first, since it wasn't serving any purpose for me, but then I realized that you can use it to create a shield to fight the monsters, which was a really interesting mechanic (whether or not it was intentional)! Just a couple things I noticed:

1. The combat system was a bit difficult to master. Since the player is so slow, and you can only attack in one direction at a time, fighting multiple green monsters can really take your health down. Using treasure as a shield helps, but maybe there's a way to improve the combat.

2. When you're emptying the inventory, you can accidentally empty it all against a wall so that you can only target the outer items. Not a huge problem, since you can just pick them up and throw some of them elsewhere to get to the inner items, but maybe increasing the hitboxes of dropped items might make it a little easier to manage.

Overall, it's a great game, and it would be really cool to expand the concept over more levels, enemies, and items!

Great game. Took me a few rooms to realize I could pick up more than one item though. I would say a mini-map would improve player experience. If you pursue this farther, I would say you need a way to cycle your inventory, as it gets tedious (or just allow walk over for pick up so that when an item is dropped you could just walk in to it to cycle inventory).

Genious. A way to rotate through items without throwing them all far away would make this perfect.

I still cleared the dungeon without that much trouble, but it made exploring and getting stuff a punishment instead of a reward, and while it is possible to use that feeling to create something unique, the game doesn't really do that in my opinion :(

I do LOVE how the game looks though, and would play the heck out of a dungeon crawler with this aesthetic.

Concept is great, but the need to throw all my items whenever I want to switch gets annoying quick.

Really great idea for the theme of the game jam.

Conceptually, great, and the art is pretty good. Held back by difficulty of accurately aiming weapons. Would be a lot better with some kind of minimap.

Lovely art! The main character is so cute!!

I really like the idea of having to throw out your items and the idea that if this was a full game you would have to "Manage" your inventory to easily heal without causing a problem for yourself. The only issue I had was the boss door should have had some kind of border to let you know it's there

Really cool idea. What I really like about is how it makes me feel the way I feel in real life when I have to carry around a bunch of stuff and shuffle it around to find my keys or something. Taking away the inventory screen made the inventory interesting for once.

Nice work. The sprites and overall art style are very well done and I found the whole game to be charming.  Good idea with that main mechanic. It offers both a wide variety of possibilities for puzzles and makes the combat more intense.