Platformer about escaping manipulation through death
Submitted by eggshell.d — 23 hours, 4 minutes before the deadline
Add to collection 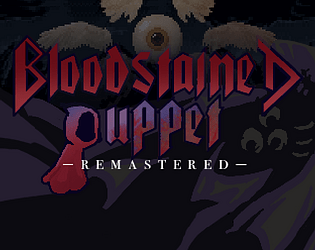 What did the time frame of your development look like?
As a two person team, we worked on this for ~1 week. This game is a sequel/expansion to a previous Jam game we made in 48h, which didn't really live up to our expectations.

So the progression felt very confusing, but I did start playing on WebGL and the cutscenes might've hinted it a little better... Gameplay wise, the control & physics were near perfect and the art was really good. Story wise, would've liked some sort of closure better than that "Clear," but the idea of interacting with both heaven and hell was very intriguing and kept me going. Audio set the mood really well.

Nice job! Atmosphere is great between the art style, music, and sound effects.

Really like that bit of "juice" you get when you dash mid-air, feels really satisfying.

And I think the level design is great slowly introducing the mechanics.

Very interesting mechanic, and wonderfully atmospheric art direction. I couldn't quite get level -2 to work, partially I think because it was hard to line up the falling block and player do to the player movement. By that I mean there is a sort of sluggish acceleration of the player in my opinion. It wasn't really noticeable until I had to line up the falling block. Other than that I thought the game was really well done, unique, and presented with awesome style. Nice work!

I couldn't get past level 6 (the boss?), but it was a fun game with a great artstyle.

I think the save point mechanic of going back on level each time you die is interesting; I don't think I've seen that before, but it was a good fair balance of difficult and fair.  If you kept going back, you'd just learn the mechanics better, so while it felt a bit punishing at first, I quickly got past each level back to the boss fight, which I couldn't pass.

The level challenges also progressed quickly, so I didn't feel like I was in a tutorial the whole time.

level 6 is indeed a dead end, but if you go back a level every time you die?

Got to the monster level maybe +6? It was hard for me to read the level number cause it was cut off the screen. Maybe cause I was full screen on an ultrawide lol. I also got to -3. How do you get past that monster??

Awesome game and very unique idea. The art is really good and that dash is oh so satisfying. Nice work!

Fun game. I started to go backwards in levels instead, but didnt find a way to get passed the level with the falling block, think it was level -2

Spikes aren't the only way to die...

I did the coding for this game :)

Really well polished and simple concept.  Made it to level 6 but that's about as far as I got.  Was unclear if there was a way to beat it, but I imagine there is.  Really good though, especially since it was made in roughly 9 days altogether.

Sorry to see that you got confused! Just a tip, remember that you go down one level whenever you die...

This game was really fun!

I like the sounds, the dash is REALLY enjoyable. Very satisfying. And the levels are intuitive and diverse.

I was a bit confused on the transition screen between the first levels and "heaven"? I wasnt sure if the game was over, and it took me a while to realise I could still control the character.

In the heaven levels, it was a bit confusing when you dropped down, fell from the top, and then a few seconds had to restart from the transition screen. Similar when you touched the 'flying rotation things'. It takes just long enough for the scene to change that you think you might have made it past and then you didnt. But very fun.

I feel like the levels were nice and diverse and I enjoyed the tutorial aspect of the early levels with the key hints in the background. But I wasnt really sure what was happening or what my objective was. Maybe I lack imagination, or maybe it could do with some more text between levels or some sort of character to talk to who could give some context of the journey.

Some of the levels were just frustrating enough that it made it hard without being annoying. (Maybe level -3... It took me so long to line that dropping boulder). Is there a way to beat level +3 ? I want to know!!! :P

The music is good, however one really minor detail. When it loads a new level the cut between the music stopping and restarting is a bit jarring. Maybe with some fading or some other way to break it up that would be better, I dont actually know what other games do. Especially when you get stuck and move between the levels frequently and quickly it can start to get a bit annoying. But like I said, a really small detail.

Overall this was really good which I can tell from the fact that I spent way longer playing this than I had planned :P Well done!

Thank you for the feedback! The music is an issue we were aware of, just no time to fix :/. About the heaven levels, you shouldn't have to restart from the top unless you touched one of the angels. I assume you were playing the WebGL version, as the downloadable version of the game has transition cutscenes that take up that weird gap you mentioned (videos are a nightmare on webGL sadly). As for the story, I had some ideas that I created the art around, but we weren't really able to flesh it out in such a short project. Maybe one day we will return to the world!