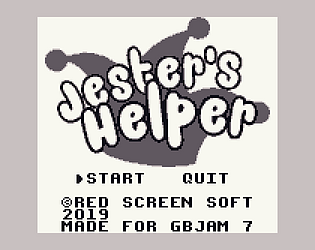 Even before playing the game, I already knew I was going to enjoy it a lot!! The graphics and the sound are stupendous, and because of that, so is the Gameboy-ness feel of this game!

The story is simple, although funny and captivating. The use of a control screen at the beginning can be something that gives mixed reactions, with some people preferring to being taught or learn by themselves them over the game, although I really liked the approach this game took even though I also believe that such a big amount of information needs to be taken little by little. But in a way, it helps with the gameboy-ness feel!

The character is controlled exactly like in a Gameboy game, which is so SO good! Basically this game is one of the ones that totally takes the cake when it comes to the resemblance to the real deal, in graphics, sound, gameplay... And the level design is really good as well. Only good things to say about this game, really. :)

Congratulations, it's one of my favorite games from this jam, without a doubt! :)

Awesome game! So much content and gameplay is perfect, awesome music and sounds, feels like a true gameboy game! The only thing I would pick on is at the start it does not let you read the story in your own time, I barely got to pay any attention to the visual images that scroll, but awesome game!

Totally agree, the plot sequence would have better with a system of pressing something to forward or enter to skip, like the how to play instructions.

Dude, this is really one of the best games i've tested till now, as far as gbjam's concerned,really! it caprtures the feeling of an old gameboy game, even controls are from the past with this delay instatn while controlling jester, really enjoyed it much, great job buddy !!

Thanks man! That is the intention!

not gonna lie, this might have been my highest rated game hahaha

The music and graphics felt like a legit gameboy game! I love the character animation too.

The mechanic is super fun but I did experience a bit of delay between input and action. However I suspect that it's just something about HTML builds in general and not about the game.

I did have a bit of a problem playing this on the xbox controller though: it felt like I should kick the barrel by pressing X and not B, it would make it feel more like the Gameboy controller layout.

Other than that, the gameplay was completely smooth. good job!

Thanks for the reply! The game has grid-based movement. Just like Pokemon. Since each movement moves 16 pixels, the delay is there to prevent accidental movement. And also face to the right side without moving. xD

So so cool! I love the animation, gameplay, sound... everything about it! It's hard, but I want to play more until I beat haha. Great job!

Lovely little game you have here. The art, controls and sound make this game feel super authentic. Another one I can imagine 8 year old me playing in the back of my parents car on the way back from a long trip! I even liked how the controls purposely feel a little "clunky" in the best possible way to emulate the gameboy feel, wonderful!

Great mechanics and it really looks like a game boy game!

You made me feel I was playing a gameboy game even before the start screen! Great music, great graphics, and everything in the gameplay (i.e. having to grab a barrel before kicking it) makes you think it's an old gameboy game. Awesome job!

We made a good team in this jam. Dotto Meister and JellyBear are two Gameboy fanatics, and I tried to program the game as best I could.

I love this; it feels just like a port of an old arcade game. The animations are too adorable! The gameboy-ness is through the roof.