Turn on the lightsView game page

In darkness, everything is gonna lie to you.
Submitted by 煌瞳小妖/MitoGame
Add to collection 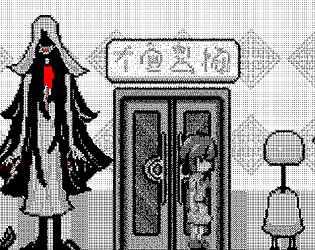 Turn on the lights's itch.io page

Interesting mechanic with the lamb turning into monster when the lights are turned on. At the start of the game it's not clear which buttons to press or were to click. It also takes quite a while before you get to the 3rd floor, which is were the game were really stars. By that time I was expecting the game to end. Also, I didn't understand what the U & I and J & K stuff was for; does it matter what the game looks like?

Wow, nice to see a horror game in such gamejam :) Interesting mechanic with lights and darkness, I liked it. Good graphics and sound (though it's bit loud at times). I'm definitely going to play updated version!

Please give my game a shot if possible ;)

Cool atmospheric game! Some problems switching lights due to drawers too close but great game. Style is so amazing. I really like the sounds.

Absolutely loved it! The tension of running to the next door was really! Stayed at the edge of my seat the whole time! The sound and visuals are on point!

Wow, this awesome. Definitely one of the best entries.  I was scared to death.   :D

Amazing art and audio! Great concept and It scared me to death multiple times :P but i enjoyed it a lot! great job!

Please consider playing our game too!

This is super creepy and I loved it. If there was a "mood" category this would probably reach the podium. The artwork and sfx combine to create a great experience. My only minor complaint is that the theme is a bit faint here. Great job!

Your game is good and sooo creepy in darkness :O !

Submitted
Talking with THE GAME
LikeReply
AklomSubmitted268 days ago

Cool game! Could you also please rate my game? :)

Submitted
The sign is a lie
LikeReply
BiebrassSubmitted269 days ago

I totally enjoyed the atmosphere of the game. The level design is cool and I liked the fact that for some enemies the light must be off and for others not, especially in the last run in room 202 even if I had to try it several times, I like a little challenge.

The only thing I didn't totally get is why the half table half witch creature doesn't hurt me in the light and instead it simply stays there still. In my opinion it would have been more effective if when you turn on the light it becomes just a plain old table. In my opinion that's also the part where the game is less related to the theme of the jam because the monsters are also real in the light so they are not a lie after all.

As you said, going into room 201 is useless, I didn't die but you can skip it and go on with the story. Also, when you come out of that room in the dark and you have to turn the light on the collider of the switch in the corridor is too near to the drawer's.

Overall I think these are all minor flaws.

Now, the art blew me away, it's simplistic but extremely effective and consistent throughout the game. I really liked the design for the main charachter and the enemies.

The sound effects are ok but some of them are annoying after a while.

This is a really good game, great work!!

Thanks!  What I meant is actually when you come out of room 201 you'll have to deal with that collider problem. I set room 201 useless on purpose because the real important part is the coming monster when you come out of the room, and that's why I never entered it when I tested the level and did'nt notice the colliders  overlaped. The witch creature's mechanic is not finished, and even no machanic for the tree woman, which suppoed to be the final boss... That's why I felt quite disappointed and frustrated after I submitted the game, because I thougt the game was totally unfinished and broken. I'm really surprised and moved to see so much feedback and even playthrough video. I'm still working on this project, and I'll upload a new web version as soon as voting is over. For what I had no time to add in the end of the game, thank you for playing!

I really look forward to play the final version then! Keep going, you've earned yourself a new follower :)

Amazing game! I really enjoyed it! There tension due to the sound and the visuals is really good. A great horror experience!

What a lovely creepy game - it really entertained me :D  The graphics are great and the idea is fascinating! Hope more people try this out.