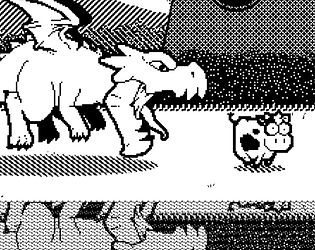 The game had incredible art, but I found it boring after  while. Maybe throw in some boss fights to break up the monotony. The animations where also unresponsive, but overall, it's a cool interpretation of the themes. Please keep working on it. :)

Submitted
IMAGO - Work With Your Reflection
LikeReply
stirDeveloper164 days ago(+1)

A runner about being the biggest scariest predator around wouldn't benefit from bossfights, but I do have plans to introduce variety and win conditions.

Simple concept but the art is awesome! I wish the was more to it mechanic wise so I could spend more time apreciating the graphics haha

Honestly amazing job especially on the art! I do think the game gets quite repetitive after a few minutes though. Also other then score there is not much of a reason to try and get every single cow. I have a an idea to fix this. If you added some sort of combo system where you had a score multiplier depending on your combo then players would most likely try and get every single cow and not let any of them pass to avoid the two headed ones. One last thing I noticed that most of the time the avoiding animation would not work. (I do understand this was a game jam so you might have ran out of time)

There's an animation glitch where the mouth opens if you hit space too quickly after eating a cow, but it will still read that the button is being held. It was something that came up during testing that I lacked time to fix, yep, but I do intend to add more to this game later and fix that bug.

Not a bad idea under normal circumstances, but I think multipliers would be frustrating for a lot of players, given that the cows are supposed to overlap and that's part of the "challenge", such that it is lol. It would def make combos more a matter of luck than skill. I'm introducing more randomized speeds and spawn times later, and probably multiple tracks for variety.

Good and simple game.
(HTML5 version)It does'nt have a menu and after the dragon is dead i was not able to guess which button that i must press to restart the game.
Art looks fantastic , mechanics are simple.

Yeah, you have to click on the text; it's not exactly intuitive but my brain was fried and I was running out of time just trying to get the game over screen to work at all.

I'll be making a lot of changes post-jam, I think; keep an eye out, and thanks for the feedback. :>

Beautiful graphics! Man awesome idea, my only thoughts was that after a minute or two it gets a little repetitive. Maybe could use several lanes for more variety?

Good idea; I did have plans to implement some extra stuff after the game jam is over and I can make updates, so I'll keep this in mind.

Simple but the graphics are spectacular!!! I like how the halftone patterns create different textures

The art was amazing (It looked like a professional artist did that over several months). The music felt very nice. The game play was not all that fun, but the graphics definitely make up for it. I loved how the themes were hidden in the game. Over all great graphics, but needs a bit of work on the game play . Good job, and keep it up!

Pretty fun game, I like how you incorporated all 3 of the themes.

Really fun, simple game. Loved the art! If you don't mind, I would appreciate it if you checked out my game :)

I'm working my way through all of them, rest assured. :>

Brilliant idea. This should honestly be a mobile game.

Simple, yet beautiful. Best in theme :)

Definitely making full use of all the theme options :)

It looks so beautiful! I took some time to understand how to not eat the radioactive ones, but once I did I could keep this up forever :) I would love to see some progression as well. Congrats on this gorgeous submission!

Submitted
The Radioactive Adventures of Tim
LikeReply
KaizarNikeSubmitted166 days ago(+1)

Excellent runner game! First game I've played of the jam, but my pick for best visuals.