If you found a bug, got ideas for new cards (skills, enemies, pickups) and gameplay mechanic or just want to share your opinion about what you liked or hated in the game - this is the right thread to do it!

- Playing field feels to big
- I have a hard time reading the gamestate. How much health I have, if i can kill an enemie, etc etc
- I do not like the randomness of enemie abilities. Would prefer if they were telegraphed (like, if I move the row of cards that a bunny is on, it gains Hop)
(wups, seems like the abilities are consistent! Didn notice that at first!)
- Other than that, the only thing I would like to have is a concrete goal ;)

It's been a while since i think about working on this kind of game (i did play a lot of Dungeon Cards indeed :p)

You got some very nice ideas, like the passive effects which are pretty cool, the unlocking of new items too.

I'll look forward to see what you make if you decide to continue this project.

I think there may be a bug related to the EvilFireball? I tried to kill it and I got a Unity error message pop up saying ID: -4 or something similar to that. It happened when I killed it and then the graphic for the EvilFireball got glitched over the board and no longer moved. 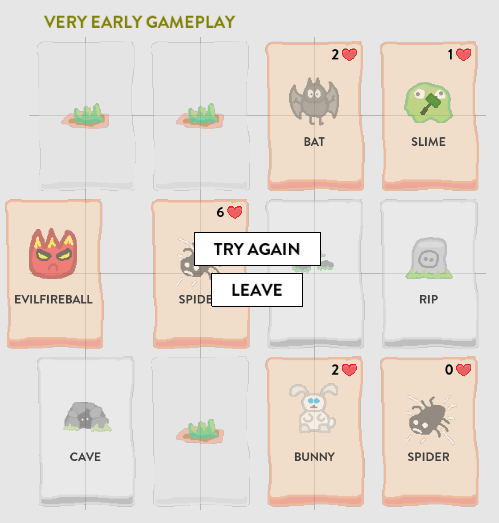 Addictive! Died at the 3rd boss iirc. Would have shared my score if it had not disappeared upon dying. Great mechanic and execution, i'd love to play more with a sense of progression, variety in cards, and polished art. GG

Thank you everyone for your feedback already! Not sure if there's a way to multi-quote, but I voted up your posts, just in case that sends out notification.

it was really fun! especially regarding having boss enemies that you have to think out of the box for a moment on how to defeat them. I only fought the fire guys so I don't know if you have other versions of bosses, but I'll definitely try to give them features to tap on the player's available cards. maybe some enemies that are healed by poison and so on.

overall I really liked it but I don't know if you're planning on infinite mode as the only means to play. I kinda liked the level structure on the tutorial. I was enjoying the puzzle approach way more than the "infinite run" one (although it was fun to see that much variety in a single play too).

In the current live version there's only fire guy to fight, but another boss already done and ready to be published with the next update. I just want to add a special drop for that one and a few other things. In the future there definitely will be enemies which annoy players with certain board and card manipulations :)

Biggest problem with puzzle-based rooms, that I'm very bad at making puzzles. Unless they would be very basic ones and take me forever to design anyway. Maybe I'll get some help there, just need to create a proper grid editor first.

Either way, in the future endless runs will have much more variety and maybe even include certain special rooms (for example if bosses would need more/less space and etc).

I see! I don't do well designing puzzles either, so I know what you mean haha

I think that if you add some quests/milestones to the endless runs you can increase the amount of satisfaction the player gets from each run.

So I'm trying to suggest something where every time the player finishes the infinite mode they can at least look at other achievements to feel like they're making progress, instead of the scenario where they're just trying to beat their own  highscore

This game has a great deal of potential. With new mechanics, new ways for them to interact, and maybe a system of collectible cards to be collected by moving over them, then played or used to change the face of the battlefield, I could see this legitimately growing into something marvelous, because the core concept of "cards that do things moving around a plane" is a very nonrestrictive creative space to inhabit.

I've only been able to kill a necrodancer once (I just got some lucky snipes) However, whenever I fight the necrodancer the entire plane fills up with mobs, and there's essentially no weapons I can actually pick up, resulting in a quick death.

Other than that, this game's great! I've been playing this a ton recently to pass time!

Thank you for the feedback! I'm still working out how to make certain bosses more "manageable".  Might add a limit or longer delay on the zombies necrodancer can spawn.

Spent a little bit of time playing with it today and had some good fun!
However in the areas of the game where you seem to have to use a mouse (adding card to deck/using lasso) feel a bit out of place.
When you can select a card with keyboard controls, it can be a bit confusing, also currently you select with enter, allowing enter or spacebar might be an improvement.

Thank you! I'll look into it. I've been mostly testing the game with mouse, so keep neglecting keyboard controls even tho I have a suspicion they're a bit (a lot?) broken at parts. Spacebar support will be added in the next update too!

Other than that, no new feedback, it's nice to see game getting better =]

i have played same gameplay like this.. and I'm really like it, maybe you can add boss, we can preparation deck before fight

Look Your Loot and Dungeon Cards have the same gameplay, indeed! In Card Hog there are a few mini-bosses (Skull, Necrodancer, Fireboss) and there will be bigger ones in the future. Preparation deck before a bigger boss fight is actually a very good and interesting idea. Thanks!

A couple of bugs for you to squash:

Thank you for the feedback! I locked mobile version to the vertical orientation,  so scaling shouldn't be the problem there (although issue might persist in mobile web version) and also added a few precautions to avoid dead cards staying on the table.

I really like the game but I feel like it is hard to navigate and or realize what is going. Its a good concept though and if more stuff is added this could be a really solid game.

perfect for mobile - playable with one hand. Keep it that way as you continue development please.  While I love that I can get better by understanding more about card behaviour, I dislike that almost all cards are opaque about their behaviour and I can only learn by trial by fire. I’ve only killed two bosses-but if I die to an unknown enemy behaviour deeper in that would be annoying. Perhaps cards can have a info panel when held click/tap that pops up. Describes what happens on spawn, moved into, dies etc.

Reply
ajaan an1 year ago

Well, seeing as the most recent reply is from a year ago I doubt you'll see this, but first off, you make GREAT web games! I've played a few of them and they are so much fun! The concept of the whole card thing is super unique and fun, and the world is cute and polished. My one suggestion: it could look more like a dungeon if you made the cards look more like a dungeon, I think would look super cool. I look forward to seeing your next game; they are always a blast to play! Hope Covid hasn't hit your developing at all, and if you need ideas you can ask, as I have a ton but 0 game dev skills wow that sounded selfish good thing you won't see this!

Oh, I will definitely see this! Thank you for the feedback, you should check out the latest version of this game (no web build yet, but it's coming soon): https://snoutup.itch.io/card-hog

And thank you for good wishes! Managed to avoid COVID-related issues so far and hoping to keep it that way with vaccination.

OH SNAP Did NOT expect this! Will definitely check it out some time soon!