It's been a week. I'm bumping it back up. Hope that's allowed!

Hi. I just released a demo (version 1.1) for my action platformer game "Citadel Stormer 2". The demo contains the first 3 levels and a boss battle (around 30-45 minutes of play) and should give you a solid idea about the gameplay style and mechanics you can expect in the final game.

Demo features:
1. Take on 3 levels of intense platforming action.
2. Fight past hordes of robot enemies and deadly traps. If you make it to the end, a giant boss awaits you!
3. Collect and use 4 weapons with varying attack damage.
4. Game save/load system lets you save your progress and come back to it later.
5. Brand new soundtrack composed for this game! 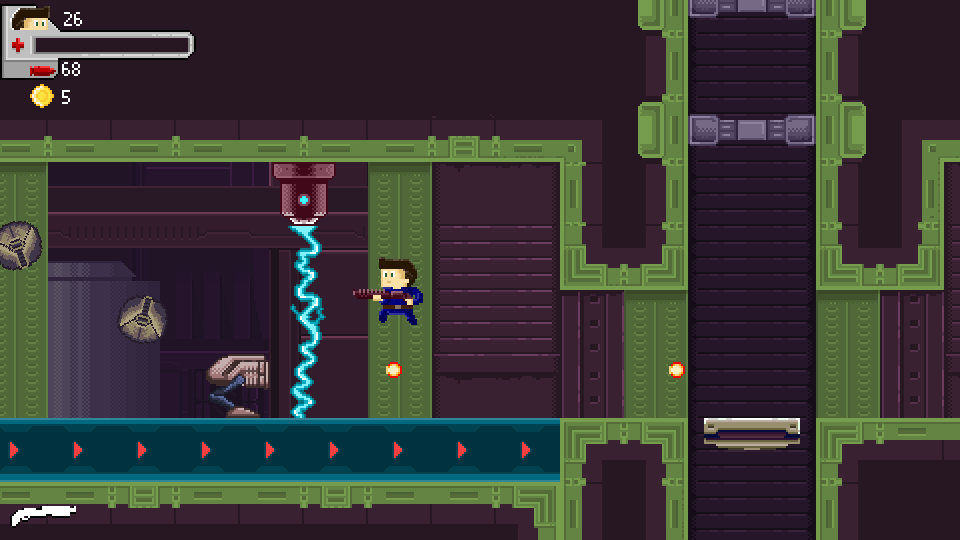 Thanks for the playthrough video. Your gameplay was amazing! You actually beat the boss on your first try!! I'm wondering now if it was too easy!

Hey! I've released a new demo. It's got the first 3 levels and a boss fight. I was wondering if you want to check it out!

Hey thanks for the playthrough!

You can actually destroy those maroon electric field generators that's hindering your path after the first save point.

hey!! Thanks for the playthrough. You did very well!

Watching you play gave me many insights about the game's design. I now know I need to make it clear that the lightning bolt machines can be destroyed. I've also decided to add a sign of some sort to indicate the direction of the save points.

As for the elevator platform, it disappeared because you can't go back up again. But I now realize that it might confuse players. But in the current version, I've made it so the platform stays. In addition to giving the game a sense of continuity it would also help players get past the lightning bolts more easily.

Reply
itch.io Community » General » General Discussion · Posted in Will play your games and stream on twitch
pixeltroid56 days ago

hey check out the demo of my 2D action platformer game "Citadel Stormer 2".

It includes the first level and will give you at least 30 minutes of play, that is, assuming you don't beat it without losing any lives. If you enjoyed it, I'll tag you when I release my next demo which will be longer and contain more levels. :D

Reply
itch.io Community » itch.io » Questions & Support · Replied to Dark Dimension in I'm worried my game is going to get buried :/
pixeltroid57 days ago

Hi Dark Dimension. Thanks for the reply.

I think my game was only "featured" on GJ because it made it to the "hot" page as a result of being downloaded a lot in a few days -- and not because the GJ admins decided to feature it (there's a separate section on GJ for that). So....making it to "hot" created a  positive feedback loop and helped my game get seen and downloaded a whole lot more.

Yet, the opposite is true for me on itch.

So I started my itch.io game-page ( https://pixeltroid.itch.io/citadel-stormer-2 ) on June 21, 2020 to promote my 2D action platformer. On the same day, I uploaded a demo and decorated the game page with a logo, icons, background, carefully selected thumbnails, screenshots, gameplay video, write-up and all the relevant tags. I even started maintaining a devlog, to ensure that viewers and players know the status of the game. I also posted links to my gamepage on the itch forums. Sadly for me, it's been more than a month now, and I have only 100 views, 18 downloads and 2 follows.  And the "best" part is that for the last few weeks, it has not been making any impressions, so I guess the game has been buried completely and is not being seen in searches.

On the other hand, on the same day that I started my game-page here, I uploaded the same demo (and the same write-up, thumbnails, screenshots, video, tags) on the rival site "GJ". And my numbers are significantly better over there -- 351 views, 133 downloads and 11 follows. My game was also featured at the top of the GJ "hot page" for a while. It still keeps getting downloaded a few times every week. Its doing better on GJ even though I don't have a devlog over there or even promote my game on their forums.

Does any one here know why this is so?

Can someone take a look at my game-page and tell me if there is something wrong or lacking? Or if I have missed out something?

Perhaps it could be because visitors to this site are not interested in demos and only want full games. Alright, but now my concern is that even if I do release the full game here and juice up my game-page with a wider variety of thumbnails and showcase the more interesting parts of the game, the game will still not get noticed because it's already been buried. I just don't see how my game would even be seen anymore.

I fear that I blew the chance to make a good first impression and that there are no second chances.

Should I just delete my game-page and re-make it when I release the full game?

Any answers would be appreciated.

Reply
itch.io Community » General » General Discussion · Posted in Looking for any and all games to play
pixeltroid57 days ago

hey check out the demo of my 2D action platformer game "Citadel Stormer 2".

Reply
itch.io Community » itch.io » itch.io tips · Replied to Ernesto Jesús Galán Lefont in How can I get more views and downloads on a game?
pixeltroid82 days ago (1 edit)

" if the algorithm see that your game have a very low conversion rate will stop promoting it."

My game page (and demo) has been up for 11 days. I am promoting it on 5 gaming forums, twitter, instagram and many subreddits.  I am showing GIFS, screenshots and playthrough videos.

If anyone knows what I'm doing wrong, or what I need to do. I'd like to hear it.

1. New backgrounds. These have an "outdoor" feel. I quite like how it turned out.

2. Backup weapon. Players complained of running out of ammo. So I made a Tazer gun that is useful in close range and can be used without an ammo limit.

3. Gold coins! If you collect a certain amount you get an extra life.

I will add these to the next version of the Demo, which I plan to release hopefully BEFORE mid-July.

- I am currently working on finishing the first zone. Each zone will have 3 stages and 1 boss room. I have one more level to complete and I can park it aside and work on the next zone.
- Boss design for zone 1.
- Level Layouts for Zone 2. I am doing those on paper right now.I  will share photos of those as soon as soon as I finalize something.

GET THE CITADEL STORMER 2 DEMO HERE

Hi. I'd like to share a demo of my upcoming 2D action platformer "Citadel Stormer"! I don't have a final release date yet, but I am fervently working to finalize the game and release it.

Enjoy! And if you have any feedback please let me know! 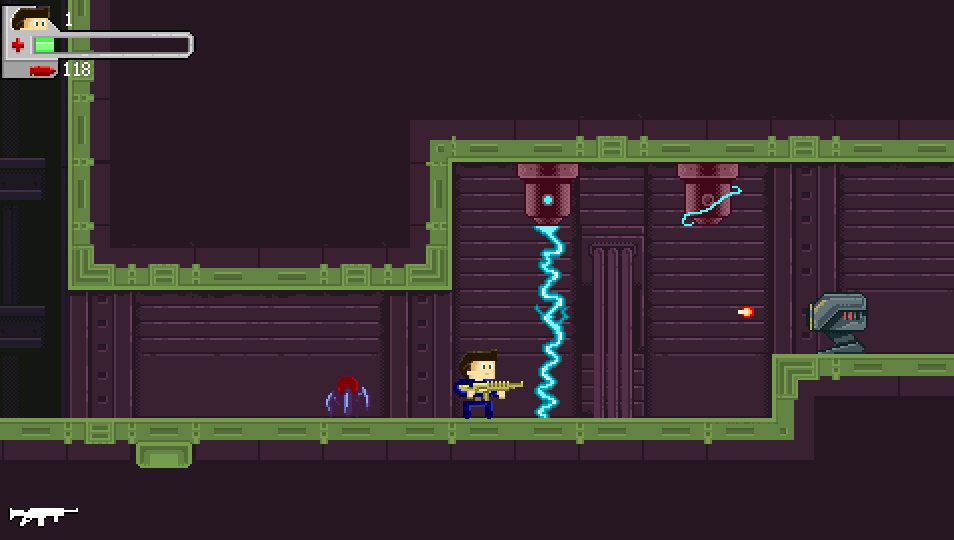 Looking for any kinds of feedback or suggestions!!

awesome! thanks! Gonna watch it now. :)

Reply
itch.io Community » Game Development » Get Feedback · Posted in I Am The King - Combat System Feedback
pixeltroid1 year ago (1 edit)

The combat is excellent.

The only issue IMO is the key mapping.

EDIT : Nevermind.  I just discovered that you can customize the key mapping. :D

- it might be nice to have save points or the ability to save and load games.
- enemy health bars appear to be made with the default draw function in Gamemaker. Maybe you could use some sprites instead.
- tile work needs more work
- whats up with the tree attacking me? lol.

Nice little game. Made it to level 12 and got stuck. I have no idea how to get past that orange enemy. Good stuff!

I'd like to present my platformer game Citadel Stormer! I originally made this for the 34th GMC gamejam (Aug 22-26, 2019) but I am now releasing a more refined and fine tuned version of the game. I am very excited about this game as it's my very first release!

Basically, its a short little platformer (with a classic Gameboy look) in which you must:

You can download the full game (only 2MB!) for FREE from it's itch.io page:  https://pixeltroid.itch.io/citadel-stormer

Do please check it out!

Hi. I tried your game out. I have a few comments to make:

1. I think there's an error in your controls. If I tap space bar, I can just fly away.

2. It would be cool if there was an option where movement is mapped on the left hand side of the keyboard (WASD) and attacks on the right side (O,P,K and L). That's how it is on all console controllers...so it might be a good idea to stick to tried and tested control system,

3. The jumps feel floaty but this isn't necessarily a bad thing.

4. Nice visual style. It has that "vector graphics" look. But I think some detailing here and there would help.

Thanks for your feedback! I am implementing a back up weapon.