Glad it ended up with a better name than "Untitled Platformer!"

Music in this was awesome!

Pretty fun! I have a hard time hitting bats in all kinds of games apparently. Also, who's Z B W?

So good! It takes a simple premise but builds such a solid game around it. I played this the longest of any game from the jam.

Those sprites look amazing! Graphical glitches aside, this is one of the best looking games in the jam.

Having energy that goes down when attacking makes it hard when the bats show up. Like, if they always come towards me, how am I supposed to swipe them away when i can only swipe a couple times?

Looking forward to seeing this on mobile!

Super simple but amazing and polished! The amount of gameplay contained in just move left and right, attack quick, and attack strong is insane. I lost at the 3rd enemy and it was tragic but I wasn't robbed. The best parts of the fighting genre distilled in gameboy form.

Well done! I love how there's a story and a reason for the game. Something I tried but ran out of time trying to think about. Also, your game is really smooth and feels awesome to play. Fast-paced but not too frantic. I love the little graphical details like the bird turning into the ball and back, and the little explosion when a brick is destroyed.

Breakout makers represent! Tried to play but Avast flagged it and sent it out for an external scan. Will try again when it comes back!

Excellent! A fellow lover of the classics! Had some trouble getting started, but this is solid. I had a lot of trouble with my paddle moving horizontally into the ball, so I tried to do that on purpose with yours. That was a fun bug!

Good observation on the theme! I actually started this just to make Breakout, but I decided to create art halfway through and it eventually morphed into the final version. I wish I'd have come up with the theme in the first place, I could've tried to have it make sense.

The bouncing horizontally is annoying. But what is worse is the bug it replaced. If you hit far enough to the side, the ball's direction would go down instead, straight through the paddle and into the void! I should have tightened the angle possibilities to prevent the super-boring wall-to-wall bounce problem, but I ran out of energy. My wife hates when it does that too, that should have clued me in earlier.

As for the music, I grabbed a track off a random midi generator last minute and it sounded nice enough. I wish I'd got some happy bouncing music, or at least something a little more uplifting. I do love pirates, though - maybe it's just unconscious bias...

Anyway, thanks for playing and leaving such detailed feedback! I had a lot of fun making this, and I'm proud now to tell people "I made a game!" I just don't elaborate on how original or well-designed it is :)

Did this get submitted? I can't find it!

No problem! I'm excited to play it.

So cute! I love it! Excited to see it go up on the play store too.

Glad you entered! Good job doing your sprites yourself, too. It might not be the best, but you can always look at it and go "I made this."

OK I submitted it! 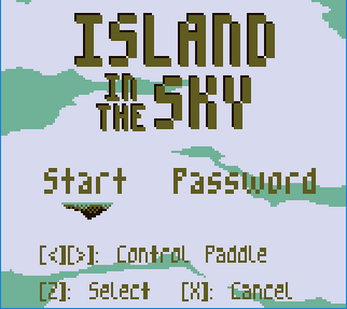 Password option is not implemented... That was a little ambitious of me. I kept thinking about how great it would be to do passwords, but actually I had no idea how to do it. Stressing myself out on the last day on little sleep was not working for me, so I decided to cut it short and upload.

Assets used: Font is m3x6 from Daniel Linnsen. Displaying weird on my game but it looks good in everything else... I dunno.

All sound effects created in bxfr. Music is made in Abundant-Music.com, using the seed "My Strawberry". I ran the midi through GXSCC, a japanese chiptune program, to convert it from midi pianos and electric guitars to actual chiptunes. I later learned you can set instruments to square and other waves in Abundant Music, so that was unnecessary.

Was planning to add more powerups, levels, and features like level titles and quotes. I might go back and do some work on it after a nap, but right now I'm drained. Thanks to everyone who commented or played the game! It's not perfect, but it's a game and I made it.

Implemented pause! I thought there'd be an in-engine "Pause" function but GMS apparently doesn't have that. I was intimidated by the idea of pausing everything myself, but it turns out it was pretty easy! I do set the speed of the ball using "speed" though, so at first I stopped everything else but the ball would just venture out into the great beyond, unfettered by all the pesky collision code.

I uploaded a new build! New features include:

If you get a chance, give it a shot and tell me what you think!

Here's hoping that Orc on the right ends up playable in the final version! I love being an Orc. :)

Wow that was crazy! I started, thinking "OK I'll figure this out, dodge discs no problem..." and then "Ahhh~" as I frantically dodge just the initial 2! then a third one?!? I got killed just before the 4th disc spawned. Good stuff.

Excellent! The designer just left these plans for the game's levels lying around! We can use them to beat all the levels! Muahahaha!

The new UI addition and the bit in the description (I may have just missed it before...) do a really good job explaining the premise! I got to level 8 before I had to get back to work. It's a lot of fun, a kind of puzzle I don't think I ever played before.

In level 7, I ended up swapping my slow speed to the big block at the top to get back around it, but once I had transferred the 25% speed to the small block that was blocking the exit, I didn't have anything to slow down the big block again! So I just tried to time it as best I can and ran past. It felt like cheating a little, but also like I figured out a secret.

This is some good stuff! I'm glad you kept at it. I gotta say this is LOADS better than the slasher game, and it really seems like something that should have been made for the gameboy.

What happens if you leave a ninja star behind? Can you go back and get it? Seeing you head towards the door without your third star gave me a little panic attack at first.

Animal friends?!? My wife was already stoked to play this game but I'm afraid I'll now be forced to vote you #1. Looks awesome!

That's a good idea, thanks! I used some random dithering on the ball and paddle sprites, but I kept the bricks clean so the cracks would show more. If I have time I'll create more powerup bricks and I might use dithering to keep those distinct.

I really like the background color line though! It really makes the blocks pop. I'm stealing that immediately. Thanks a ton!

Reply
GBJAM 5 community · Replied to snipr_sr in [Tutorial] How to create an option to scale your game in gamemaker!
metalman423 years ago

Err, not blurring, but the between pixels were smoothing out the motion. Now that it's pixel perfect, you can see the movement in little jerks sometimes.

I wouldn't rely on sound, since it can be off or just unnoticed. If you're always swapping your current speed for the object you shoot, it can be part of the character or something in the corner.

I think there's a lot of possibilities for gameplay in the case that you're taking on the speed of what you shoot.

Reply
GBJAM 5 community · Replied to snipr_sr in [Tutorial] How to create an option to scale your game in gamemaker!
metalman423 years ago

Reply
GBJAM 5 community · Posted in [Tutorial] How to create an option to scale your game in gamemaker!
metalman423 years ago

Awesome! I'll be implementing this tonight. Thanks!

OK this is pretty awesome! I think there needs to be an indicator for what you've swapped so far. I couldn't work out if it was like portal and you shot one then the other, or your current speed got swapped with whatever you shot. If you had an icon in the bottom for what you'd be swapping with the next thing you shot, that might help make things more obvious.

Also HUGE improvement in presentation from the last one! Keep it up!

That definitely brings across the image of a broken ruin. Not just the grainy and irregular tiles but their placement too.

Maybe "____ the bouncing cat"? Or something better with the cats' name?

Wow that story sounds really intriguing. I'm a sucker for stories about what happens in (any version of) hell. >.>

I also love your art and backgrounds! I love how the bold bright outline allows you to have a dark character and background at the same time.

I also thought this morning to add a password system instead of a saved memory, to instill a little nostalgia.

It looks really awesome! Much potential for gameplay switching between the two characters. Animation on them looks great, too!

We need to get you a title, this is too amazing to just be "Untitled Platformer!

Also, I love how you use the outlines. It's like, a dark outline but sometimes the color runs outside so you get a softer edge. But you still get the benefit of the outline.