Can you help Buz Bot reactivate the power?
Submitted by l0rn3 — 1 hour, 21 minutes before the deadline
Add to collection

Some feedback: The controls feel a little akward in the beggining and took me a while to get used to them .

Very cool one, love the visuals !

Thanks, glad you liked it :)

The low poly models are really cute, I was a bit confused at the beginning about how to play the game. Maybe a small trivial level / intro to show off the mechanics would have helped, but I understand that it is not easy in the short amount of time available for the jam

Submitted
Escape from the simulation
LikeReply
l0rn3Developer102 days ago

Thanks, glad you liked it

Cool puzzle game! I must admit I was first a bit confused on what to do^^ Really nice art

really cool art and good music made self made, overall Great Game !

Thanks glad you liked it :)

awesome visuals, cool musics but there are some big issues with the gameplay :

- I feel weird about the control, it is not responsive if a key is pressed for a long time and the isometric tiles confused me because it has a 45 degree angle with up right down left so it is not obvious which key make you move in which direction.

Thanks for playing and I appreciate the detailed feedback:

- I think there might be a bug with that but it worked fine for me??

Yh sorry about that the collision shapes on the walls and objects are a bit scuffed :)

I see for a mobile game controls will probably be more intuitive. But for the size of the screen I had already tried f11 xD my point was that the screen of my computer is smaller than 1080*1080 so it had a weird scroll. Anyways you should consider reducing the resolution because I think phones have smaller screen (but maybe recent phone actually have a better resolution than my computer so I'm not too sure)

The visuals are really great, it is hard to controll tho und a little buggy, might need some work on that front ;-). But other than that this is a solid submission!

Glad you liked it, and thanks for the feedback :)

Aside from the problems with the controls, I think the "walk forward until you hit something" is stretching the AI definition a bit. Still, the concept here is good, there's a neat puzzle game that this could be turned into! Keep it up!

Nice game.
And for the movement, maybe having to press both W and A to go up/left might work...

Just tried that and feel it would makes it easier to get used to the controls, but it does cause a few more bugs

Great visuals! the controls felt a little weird, but I got use to it. I liked all the polish you had, great game!

Glad you enjoyed it, thank you for the feedback :)

Very well made, the visuals are incredible.

The art is really great and I like how hectic it gets changing your solution on the fly. I wish I could push stuff around faster but the camera angle makes it kind of hard to control since you always need to walk in diagonals.

The idea behind the game is great !

But it took me some time to get confortable with the controls. Controls like this are not that easy with Isometrics games.

I agree the controls with this camera angle is very tricky to get done right.

Thanks for the feedback, any advice on how the controls could be improved would be great as this is the first isometric game I have made. :)

Its good but the movement was throwing me off. Like how you press S or Down Arrow to go downwards even though it looks like you are going left. Maybe that is just me though

Thanks for the feedback, do you have any ideas of how the controls could be changed in order to make them more intuitive?

I would change the axis. because the way I see the map is that the bottom left corner is the corner closest to the screen. But with the way it currently is the bottom left corner would be the left most corner. Kinda hard to explain so I made this. Meaning the A and D keys would move the way the W and  S keys moved originally. You could make a setting option to change the way it moves maybe if you still like the original movement. 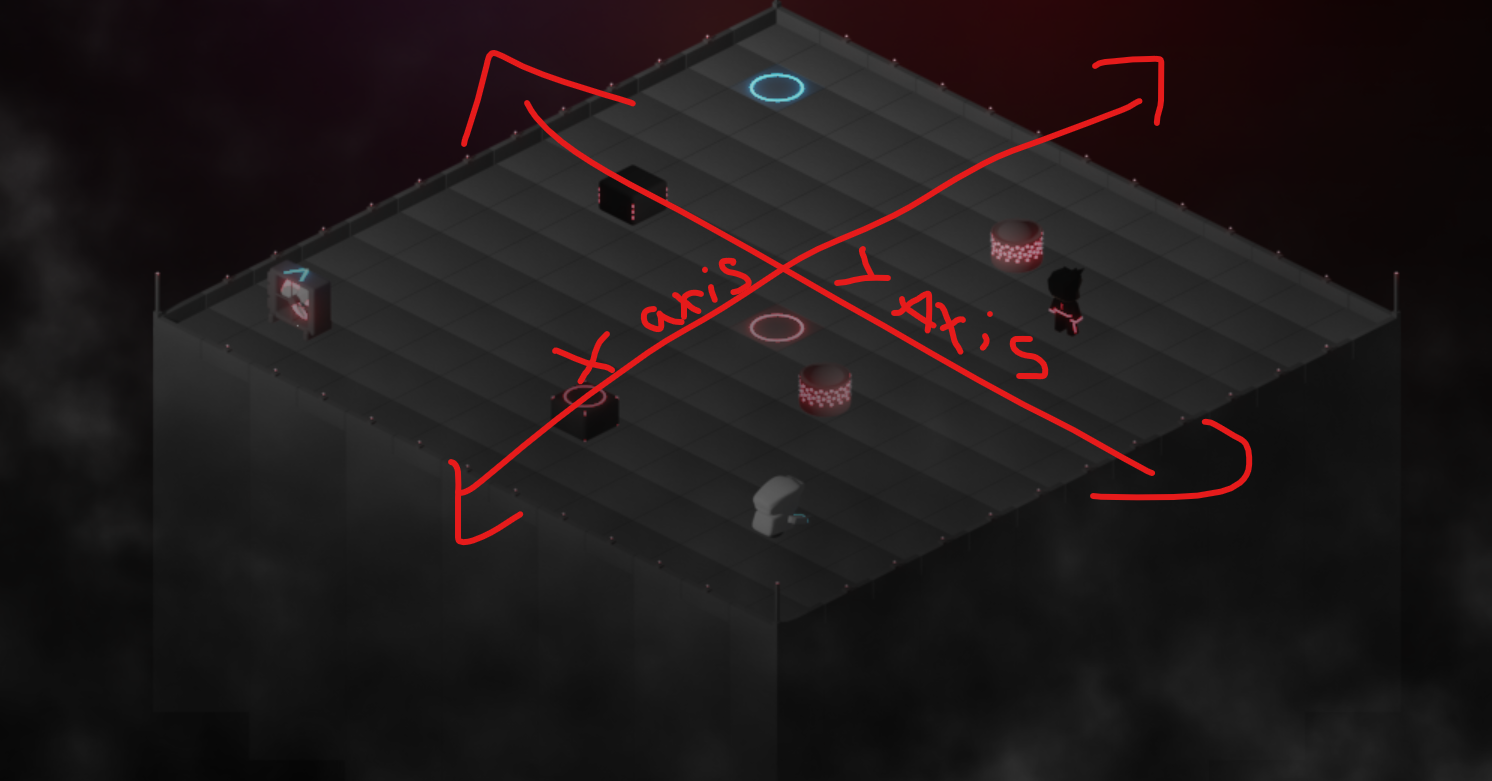 The option to change between is a good idea, but do you think it's that down should correlate to face on the cube that is the darkest? And originally i was working on an image with the dark face on the other side of the cube.

Great thank you, I can understand why people found it hard to understand now, your help is greatly appreciated

that is good to hear :) glad to help

Sadly, the player sometimes pushes / pulls the objects to unwanted locations.
An in-game tutorial would be a nice upgrade.

Thanks for the feedback, I plan to implement both those ideas

The art is so adorable, reminds me of that Vector robot by Anki

The first level is pretty difficult. Maybe start without any puzzle elements. Just the bot walking into the goal and then introduce one element at a time.

Good idea we had the same idea but ran out of time to make those levels.