Can you find a way to go back to your universe from this tricky universe ?
Submitted by DevBase — 1 day, 23 hours before the deadline
Add to collection 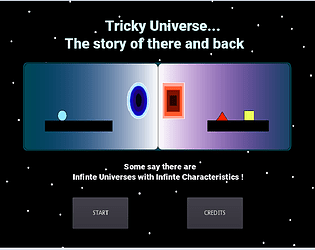 How does your game utilize the limitation and theme?
Goal of the game is to search a way back to circular universe while being lost in diagonal universe. You collect different powers and utilize them to clear level. The whole game is about the player and his little adventure just like his grandpa which suits the theme there and back. As he is lost in there and trying to find a way back.

The game is as long as a single backing music track

If you did any of the optional challenges, explain how they were used:
1)Theme party : Past 8 BITS TO INFINTY game jam 'Retro Platformer Jam'.
Restriction - No graphics only basic shapes.
Theme - Exploration
Whole game is created just by basic shapes circular,triangle and rectangle.
Also player explore the world of diagonal universe and its levels to proceed further.

2)In a song : Game has always single backing track running.

3)Hidden Secrets:- Some levels have secret rooms. You have to search for it to proceed to next level.

Fun little game, controls were on point and super responsive an natural for a platformer. Short and sweet and an enjoyable experience all the way to the end. Super good job man I enjoyed it. Only thing that would have been a bit better was if powerups were just picked up and applied upon overlapping them.

Really fun game ! The controls felt really tight and each level was fun to go through. Meditation level was a little long, but nice either way. Well done

Not bad at all man! idk why you said you were worried in your post that was a lot of fun!  I did get stuck at one point where I kept getting spawned underneath the falling spikes tho.  I def like the idea of choosing the power ups tho.  Thos kinds of trade-off type decisions always make for an enticing game.

Check out my game if you have a chance!

Thank you for your kind word.

Will definitely check your game !

Great small game, the power collection is a great take on collectables, and I love the meditate level. I feel it could be a bit longer but its a game jam so its fine. My only recommendations is to allow the player to use the space key for jump instead of collect power it was just a bit odd to adapt to the controls. Also make it so the text at the beginning of the level is skipped after the first time you read it. Other than that great game.

If you have the time could you rate / give feedback to my submission.

Submitted
Mission to the Moon and Back
LikeReply
DevBaseDeveloper310 days ago

Thank you, I will work on your suggestion.

I will check yours too !

Cute simply game!  I really like the power collection aspect / use in each level.  The meditation was was particularly clever, because most people's instant reaction is to run - then you realize you need to just wait.

My suggestions:
- Put YOUR name in the credits instead of just saying "self made"!  Got to make sure to put your name out there since ya did all the work :)
- I struggled with the first leap of faith.  I got it on the first try but it was difficult to repeat the jump to the invisible platform when I went through a second time.  I had to jump after already walking off the cliff - which felt strange.  So maybe inch the platform a little closer?

Over all great fun puzzle platformer game!  Nice job on the jam!

Thanks for checking out my game.

As for credit, I will edit it when jam judging is finished.

Really cute game! i loved the amount of unique gimmicky levels you had, very impressive to get that much content in during a jam. Overall, great work!

I am happy and excited seeing all the good comments you are posting.

Glad you liked my game.

Will definitely check your game !!

The game was very cool! I like the idea of a parallel universe that you must escape from.

Music and sounds were ok. The story was interesting!

Submitted
The Other World
LikeReply
Brainiac GamesSubmitted312 days ago(+1)

This game is really fun. The dialogues are very interesting and the levels have variety to them. I would really appreciate it if you could check out my game and leave a rating :)

And, already checked out your game. And I liked it.

Really good game! The puzzles are simple yet fun, and it was an enjoyable experience overall.

I am glad you liked it.

This was a really clever game. I liked all the different puzzles and secrets you had to find. Honestly I feel like it'd feel a little better to just pick up collectibles by touching them. Maybe it's just me but my brain would get confused and hit the wrong buttons sometimes trying to grab a powerup as I was running by. Overall very  clever game with a fun story.

I will Implement mechanics and see hows that working out.

Thanks for playing my game and especially for feedback.

Thanks for playing my game.

I have decided this art because I was using one of the more limitation given in jam that is 'have a limitation and theme of past 8 bit jam.'

Which was 'no graphics only basic shapes'.

I will check you game too.

Oooh I didn't know. It's fine then :D

Nice idea(s). the sheer amount of uniqe concpets makes it worth the play (and jokes) but some improvemnt could be made over the graphics and sound.

Thanks. It really means so much to me!

Also I have decided this art because I was using one of the limitation given in jam that is 'have a limitation and theme of past 8 bit jam.'

which was 'no graphics only basic shapes'.

Also I will check your game and rate it.

Submitted
RUN that back
LikeReply
DevBaseDeveloper313 days ago

I am really proud that you enjoyed it.

Thanks ! I am really happy seeing you all are playing my game

I had a lot of fun playing this game, love all the tricks :-)

Submitted
DEER AND BACK - VimJam
LikeReply
DevBaseDeveloper313 days ago

Thanks. I am glad that I have made something that people have fun with .