A lewd single-ending Pico-8 VN. You're trespassing in a dragon's lair...
Submitted by nowthatsstrategy (@nowthatstrategy) — 58 minutes, 1 second before the deadline
Add to collection 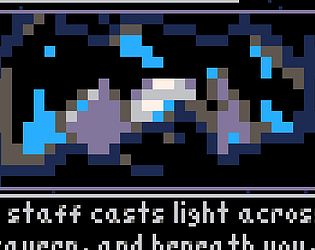 Very neat animations for the hypnosis, excellent art and use of the limited pico8 graphics. More dialogue and distinct choices would have been nice, but whats there creates a very cool vibe.

I really enjoyed the retro cRPG aesthetic so it was pretty cool to see a VN like that. Didn't think I was that much into dragon hypnosis but it seemed pretty hot. Pretty short and railroady but that comes with the territory with the time constraints of game jams. Think you did a great job!

The game gave me a very strong, first impression, with a very creative use of menus, overlays and pictures. Being able to fast forward the dialogue was a plus, and it was overall well designed and written.

However, given the choices, I was disappointed that it all narrowed down to the same thing. The narrative built up a lot, brimming with possibilities, and ended up with just choosing one outcome. It became more problematic in later playthroughs, since it really displayed that the options were not so different between each other and the short tidbits of alternate dialogues were not really worth it.

The setting and narrative were superb. You could easily expand on this with worthwhile alternative paths. What's here may be too short, but it's so well constructed that it leaves people yearning for more. Cheers! 🐳

Great use of the dialogue boxes and interface to imply hypnosis! I don't have this kink but the illustration and concentration on it was so good that I could almost feel what people love about it. Great lo-fi adventure game graphics as well :)

As far as I could tell there weren't multiple endings, which was a real let down because the game info implies that there's a way to escape. The plot itself was still good though, I enjoyed playing :)

Wow I haven't played a game like this is a long time, the art and music and overall tone were very good!! I couldn't find a path that ended "well" and adventurer>truth gave me a line error, over all great job!!