Win over men and women in a sim for the best of Gigolos!!
Submitted by TheLastYuriSamurai (@last_yuri) — 2 hours, 37 minutes before the deadline
Add to collection 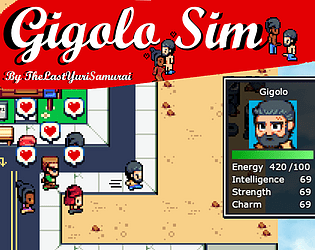 This is a seriously nostalgic experience from when we used to do monstrously repetitive tasks on the adult games on Newgrounds in the vague hope of seeing some titties :) You've got some great personality to the game, I played it all the way through at once and the punchline was frustrating but great. Your graphics are really charming, and with more time (and images to reward the players, like you say) this could be very satisfying :)

I am so happy you 100% caught the inspiration for this!! I definitely need to add more professions and gameplay, but I'm happy with what I came up with for the month! I plan on releasing a commercial version on April 18th! It'll be 1$ for the full version and a longer demo than this. Hopefully it'll meet your expectations! Let me know if theres any cool concepts or job ideas you think I should add to the final version ! And thanks for leaving a comment, it means a lot to get feedback.

This was brimming with personality! I believe this is the jam game I spent the most time in so far, and that’s an achievement of its own.

While it doesn’t deviate much from the standard Charm/Strength/Intelligence format that’s common about exploration dating sims, I think the content that’s here was enough for a decent fun time, mixed in with a lot of innuendo given the nature of the jam. The dialog works for the style it’s written on and there’s enough alternatives for the different things you can evolve and the rhythm of the game also steady speeds-up across the time you play given how the jobs pay-out given on your stats.

Ultimately, the only thing I could ask for would be more polish and continuing to pursue an even bigger identity that sets it apart from other exploration dating sims but given that you already have plans to expand it, I believe that will becoming down the road. Here’s our votes of best wishes and the best luck for that! Cheers! 🐳

Ah the feedback is so helpful thank you!! And it really means a lot from such an amazing studio to hear that you enjoyed my game!! I'm so excited to expand on this with a bigger city, a karma system, and more than one job per stat! Hopefully it can reach the polish level of cosplay café, so thanks again!!

Such a fun and funny game. I enjoyed the game play and I loved all of the inserted puns. It made me want to click on everything and got me so focused. The music was awesome too, congrats to you and Yobob. Good job!!

Fun quirky little game, actually took me a bout an hour to find everything, and i do mean just to find and do everything, i think i clicked on everything three times. Still pretty fun little game, good job, XD

Hahaha I really do need to make a nice little walkthrough guide! I'm so glad you enjoyed it I have so many ideas on things to add! Do you feel some nsfw images when you unlock the guys and girls would improve things?

NSFW is always an improvement in my book, xD