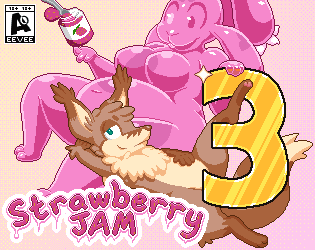 For the third time!!

I'll probably be tweeting about the jam on my Twitter, @eevee, and possibly also on my smut-laden alt, @squishfox.

This jam is judged, but there are no prizes, so don't take it too seriously.  New games are preferred — but that said, if you're finishing up something on the backburner or continuing a previous jam game or whatever, please leave a comment on your own jam submission page (remember, it's possible to play a game without visiting the actual game page!) letting everyone know what you started with, so we can adjust accordingly.

If at all possible, please try to release for all three major platforms — Linux, Mac, and that other one.  Or both Android and iOS.  Something that runs in a browser is great too.  Folks can't enjoy (or rate) your game if they can't play it!

Finally, the most important rule: don't get me (or itch) in trouble.  We're all adults here, so I leave that to your impeccable judgement.

Voting lasts for two weeks after the end of the jam, i.e. the first half of March.  Anyone who submits a game or contributes to a submitted game can vote.  Please reserve some time to play the other entries, vote on them, and let the authors know what you think!  It's not so much fun making a game that no one plays.

The voting categories are fairly arbitrary, but I have included some sample interpretations.

Deep breaths!  I'm here for you.

You can ask around on Discord, and/or try one of the following game making gizmos, which all ⓐ work on any computer, ⓑ don't require programming experience, ⓒ don't focus too much on custom artwork, ⓓ are well-known enough that you can easily get help with them, and ⓔ produce things that can be played online.

bitsy is a teeny tiny game editor for making little stories with a very-low-res pixel art aesthetic.  It's best at exploration and conversation.  No programming required, and in fact programming it is nearly impossible.

Twine makes choose-your-own-adventures with simple links between pages, and often has no artwork at all — though you can certainly add some, and do all manner of other shenanigans if you're dedicated enough.

Inform 7 is an English-like programming language for making those old-school text adventures where you GO NORTH and GO SOUTH and then give up and buy the hint manual.  It is programming, but making a small world with some simple interactions is shockingly straightforward.

If you're a programmer and have just never tried making a game, you could try LÖVE (an unopinionated 2D Lua engine that I like a lot), the PICO-8 (a retro-styled "fantasy console" with built-in tools for making art, sounds, music, and levels), or of course Unity which I hear is popular in some obscure circles.  Fair warning: some fundamental things that most games need early on (like collision detection) can be kind of a pain in the ass, so don't be afraid to reach out to the Discord!

If you're an artist and have a very strong aversion to computers (rightfully so), you could try Flick, a sort of art-based alternative to Twine where the player makes choices by clicking on particular colors in an image.

Other lists of possible game-making tools for beginners:

Q: Can I start early?
A: It is not within my powers to stop you.  But as mentioned above: please leave a comment on the jam submission letting us know what your progress was when the jam started, so we can maintain a thin façade of fairness.

Q: Why is there a picture of a rabbit and a pink blob?
A: I… am not sure this is the right jam for you.