Pleasure yourself for your ​viewers' pleasure.
Submitted by Team Infernus — 4 minutes, 33 seconds before the deadline
Add to collection 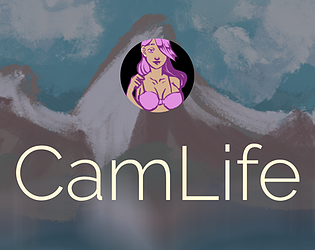 Great that you got to fix this before the end of the jam :) It's a nice idea and I'm interested in where it could go, though it takes a while to get going - it would be nice to have some more actions or things to do while building up your skills. Ditto the below on the bug with the scrollbar!

Also, I'm very intrigued by the project on your Patreon :D

First off, congratulations on fixing the game! We were a bit worried since the end of judging was approaching, but good job on making it through. We understand, we’ve been making fixes and hammering issues since we’ve deployed our game as well.

Now, going into the actual critique of the game itself, I believe this is a concept that could come to be very interesting, especially with all of the different mechanics that you guys apparently wanted to put in it. It’s an adult spice on the usual tycoon formula and given how it’s implemented, it can be a very engaging concept.

Unfortunately, I felt a bit lost about what was going on in the game. While the game mentions several things in the features, there were a few of them I couldn’t get to trigger. For starters, I don’t know if it was intended as a design choice, or if it’s a glitch, but I half expected that going through the videos and unlocking the different items would result in getting a cam-action respective to them. While the action bar does have arrows pointing up and down, it seems like I only ever got a single first bar of actions.

Testing the game again, and trying to buy different items at first, it seems like there are more actions to the game, but they’re unable to be accessible because you can’t scroll through action bars. I will assume that it’s a glitch then.

As for other in-game features, I also couldn’t get DMs to work. The different persons seem like intractable buttons, but there’s no way to click them. Likewise, I also found it confusing as to what actually guaranteed me money, and it felt like it happened arbitrarily, or slowly over a period of time, rather than something I had an actual control over. I also think it’d be fun if you could actually move the windows around like an actual desktop and performs actions for the viewers at the same time that you try to finish a UTube video.

I feel like there’s even more detail we could get into too regarding feedback, but given how long this comment is already getting, I think there’s enough on the plate right now. Once again, I hope that you continue pulling through, and hope to see a fully-fixed build soon. I’d really like to see you guys doing more with this, and we’ll be cheering for you. Cheers! 🐳

A lot of the actions are reserved for the private chats only since as a camgirl you don't want to give away too much for free. We definitely didn't convey very well that the way to get to a private chat is by repeatedly using actions to increase the interest level of your viewers. As for DMs, they are broken. The public chat is supposed to feel very irregular for money flow since the private and exclusive chats are supposed to give you a more reliable income source. Regarding moving the windows around, there was more we wanted to do to make the game feel more like a true desktop but we were too pressed for time.

Thanks for the detailed feedback, we really appreciate it! Since we've finished with this game for now we are looking forward to trying out yours!

I think it's a great start to a game idea. Training to be a better streamer is definitely a novel concept. If I were you, I would look at some of the dating sims on newgrounds to see how they do it. Be quick on it though, as most are used by Flash, and that's going away next year!

Submitted
Don't Let Me Down
LikeReply
TheLastYuriSamuraiSubmitted3 years ago(+1)

I'm unsure if I was playing it wrong, some instructions would help, it did look fun though!

I agree - I'm not sure what I'm supposed to be doing to get started! Would love some pointers because this looks interesting

We fixed some pretty big bugs and tried to add some clarity so it should be a bit more playable now. One important thing to note is that performing actions for your viewers will increase their interest and eventually make them take you to a private chat where you will have more actions available (some actions are private only) and earn more money.