In space, no one can hear you sigh...
Submitted by FocusNIL, Spriter Theo, Chem13, alien236 — 54 minutes, 43 seconds before the deadline
Add to collection 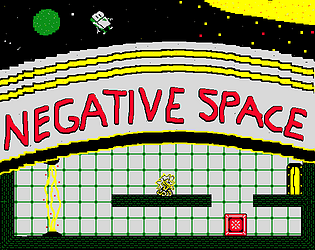 Use of the limitation
There are exactly five colors, off white, black, red, green, and yellow.

I like the mechanic in this game! I wish that the levels lead me into the mechanics a bit better, but regardless, I had fun! Nice job!

This game probably has the most interesting and innovative mechanic of the jam. Great Job all!

Thank you! That is really high praise!

This game has a really fun idea, but I feel like most games that do something like this start with a few easier levels that let the player get used to the mechanic. It took me like 20 minutes to beat level 1 because I kept hitting the wrong buttons and the first time I got to the generator with the battery I wasn't close enough to activate it, lol.

Also, when you do accidentally hit the wrong button, turning it back around doesn't save you, the fall time seems to remain and it still kills you... I don't know if that is intended, but it's not very forgiving. It would be nice to be able to do that to move more quickly, kind of like a speedrun tactic, lol.

Thanks for the feedback! I agree that it would have been better to have easier levels to better explain the mechanics. Unfortunately, we didn't have much time to playtest our levels before launch. We'll definitely make sure to keep your advice in mind if we expand the project!

So you need the jet booster power up, but you can save yourself in the situation you describe if you jump at the last second. Kind of like doing a ground pound in Super Mario 64. As far as other speed run tactics go, I found out (on accident) that if you manage to land in the open exit door while falling you don't crash on impact!

Nice rotation concept, and the little robot is cute but at the begining I keep destroying him xD Forgive me! And also nice choice about the text that does not block movement while reading it.

Hello! I'm the character designer, I'm glad you liked our robot! I forgive you for breaking him. If it makes you feel any better, I'm sure I ended up breaking  him way more than you did.

I really enjoy the rotation of the level mechanic and the humour in the dialogue.

Maybe two thing to improve are the sound design of the game and the speed of the movement (especially on the rotation).

Congrats for finish the game and the Jam!

Thanks for the feedback! Yeah there is definitely some fine tuning we'd like to do after the jam, but I'm glad we were able to make something you enjoyed!

I love the idea here! Player movement speed feels a bit too slow, but for what I played it was very enjoyable!

Thanks! There are definitely a few things we will want to tweak once the jam is done, player speed being one of them.

Nice game! The story and comments from the robot were nicely written, and it was a unique concept too! It'd be nice if the rotation was a little faster, and the falling sound was less harsh, but I enjoyed it!

Yeah, I screwed up the rotation speed by tying it to the frame rate. Definitely a needed fix. That, and the falling sound specifically need tweaks. But hey, thanks for taking the time to play the game!

Fantastic idea and concept, I think the art style and music flowed well together, it gave me a nostalgic feeling of playing old flash puzzle games.

I loved those old flash games, so I take that as a high honor! Thank you for playing!

I really enjoyed playing this game!

I don't really have any feedback with improvements, maybe could add some particles when the player dies or hits the ground, but I understand that this isn't prioritised when you only have 72 hours to make  game :D.

I'm glad you enjoyed the story! Our writer is a very talented guy, I'll make sure he knows you liked it! Thanks so much for playing!

I really like the concept and how you implemented the limitation into the art style. The puzzles are fun, but the gameplay is slowed down because of the camera turning animation. As the other comment said, it might be a good idea to change the death sound effect.

I'm looking forward to seeing more games from you as this has a lot of potential.

I agree with both critiques, and I very much appreciate you taking the time to play and make suggestions! I can affirm we plan on at the very least fixing both the rotation speed and the death sound, and may be add some more  levels while we're at it. Thanks for playing!

Super cool concept. Puzzles were well designed too. My only feedback would be to speed up the gameplay and find a different sound for falling down :)

My ears are still ringing :)

Here is my rating. Keep up the good work. 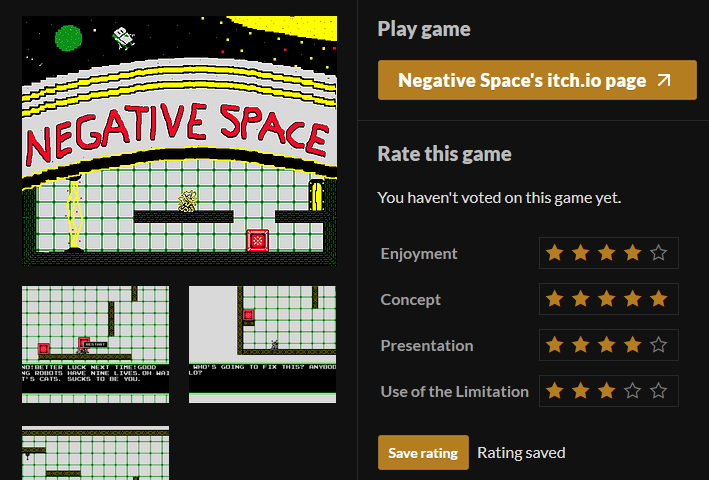 Bold to post your rating, but definitely a more than fair one. Yeah, we've been getting a lot of feed back on the death sound, we will definitely fix that after the jam. Thanks for taking the time to rate the game, the feedback is much appreciated!

Fun game with a very original core mechanic. It gave me a very fresh way of looking at jumping puzzles. It reminded me a little bit of those mechanical puzzles where you have to guide a little ball bearing that's rolling around.

The visuals could use an upgrade--they are a bit stark and bare. I know the main character is a robot (and he makes the appropriate sound effect when he dies, over and over and over again), but somehow I kept thinking of him as some kind of bug, maybe a bee. :)

Labyrinth! I used to have a physical version of the game. I could never quite beat it. Theoden, the guy who made the character sprite, want you to know he 100% agrees, he does look like a bee. And yes, the death sound needs to be a bit less... jarring... Thanks for playing the game, and thanks for the feedback!