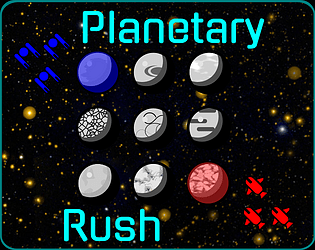 I beat hard, in the end it just became frantically drawing lines and making sure it was behind the enemy but it was fun watching the ships blow up.  Nice sounds and feel.  A clearer indication of what was going on and being able to choose a new difficulty without having to quit the game would have been nice.

Thanks for playing! Great feedback!

I had the same experience. I should probably slow time down a bit, to make it less frantic. But I don't want to bore players when there's nothing going on. I don't want to drag out the end-game too much either. That's a big problem for the 4x genre (which this is not... yet)

i had a tough time understanding, but when I got it I got hooked! Good job man!

I like the creativity and clarity this game has. It has some light strategy that presents good choices to make from beginning to end. Even though the ships were tiny to see, it was clear to see a large group of them. At times where every planet was sending out ships, I would get some slowdown.

I would like to see where the game would go if you plan to develop it more. I do fancy tactic games like this.  Good job!

Thanks for playing! Great feedback!

I've got a few ideas how I can improve framerates now. (Better late than never)

My small brain had issues understanding what to do at first but once I figured it out I was really impressed by the ideas displayed here. Gameplay wise its pretty excellent, so the things I'd focus on would be on the art style and visual clarity.

Without being on full screen it was pretty hard to see the drawn attack lines especially on a high pixel density screen. Same thing with the enemy side of things, sure I could zoom in but then I'd lose on a ton of information that I would love to access to without having the zoomed out perspective.

Great job, can't wait to see what you can do in the future with this project if you decide to push it forward.

Thanks for the feedback. Good to know it has issues on Ultra HD screens. That should be relatively easy to fix.

Very enjoyable game ! The gameplay is original and fun to play, the designs and the menu are very nice as well.
Anyway, great job !

Awesome. Thanks for playing!

This is really interesting... The way you send your units has the potential for tactical movement but you really need to time it correctly... I tried a few times to flank an attacking unit and was really impressed... And then it got too hectic and I lost...

If you think that you will keep on developing it (and you should in my opinion) think of presenting the units as a single shape of varying size (depending on the number of ships)... It would make things more clear visually...

Thanks. I'm thinking that time should slow down when you zoom-in the camera. That would let you plan more detailed attacks.

I like your idea of cleaning up the ships. Having all those ships is causing lag in the late game. Maybe 5 fighters could get you 1 corvette, 5 corvettes could be a frigate.

It would also add more tactical options... 3 Corvettes for example would be more vulnerable to enemy fire but a frigate would be slower... So you could send a frigate to block the path of an incoming assault while at the same time some corvettes could circle around them and flank them...

That sounds awesome. I'm adding it to my github issues page. https://github.com/plexsoup/PlanetaryRush/issues

Personally, I'm not a fan of this genre, never found them very engaging, just so you know where Im coming from. With that said, its very well done for what it is, and feels very ambitious for a short jam (you even have factions!). It's well presented and has fitting sounds.

Really like that you could drag your paths as you wanted to, adds a great feeling of control then if the ships would have been going in strait lines, also like the in-between ship-fights etc. Adds to the feel of it.

As the gameplay itself is not my thing I wont comment on it that much (it is, what it is), but what I would have liked to see is a bit more details to heighten the space "feel". The planets felt very static for example, maybe add a bit of rotation/movement there? You already have the selection effect of the planets so would love to see more of that type of stuff. Maybe the planets could have been more varied? Having one being a giant space-station etc.

Thanks for playing! There's definitely room for improvement! A giant space station is a great idea!

Amazing! Great solid game, I love the art, music, and game play. My only real complaint is that you cant go to the menu when you win.

I noticed that problem too. At the very least, the win screen should have the difficulty options. Should be an easy fix after the voting ends.