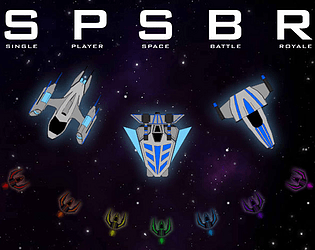 A well polished game all around. The mechanics are solid and the visual pointer was nice to have. It gets pretty easy when you learn how to strafe. If the enemies had some variety in their pattern or tactic it would be more interesting to see how they interact with each other.

thanks for the comment and I am glad you liked it... I really wanted to have various AI patterns and go the pacman route and give each enemy different character... But for two days I am happy they don't get stuck (not often at least)..

AI programming was actually pretty fun and interesting... So behaviours will have to wait for a future update...

Again thanks for playing...

Hey! I tested this game for you earlier, love what you have done to it since then, it feels like all the issues I had have been fixed, and it feels like a really solid game now. Great work!

The game-feel is spot on now, the movement feels so much better then the first iteration, and feels great to be able to do that "strafe-&-shoot" tactic, found none of the issues I had the first time around. Also like that you added health gain when you destroy a target, adding a reward for taking risks of taking someone down, while the AI might have a hard time taking advantage of that, in a player-vs-player world, trying to kill-steal someone becomes a very interesting tactic and can create some very fun stand-off situations.

Even against the AI the game is rather challenging, and while you can do some cheap tactics against them, it is harder when several are alive at ones. If there is anything I would like to see a more advanced AI types to make solo-play more interesting.

The sound is basic, but works well, and feel the art and effects feel improved from last time (at least the effects? or maybe I just remember wrongly).

As mentioned, the game really deserves a multi-player mode, maybe something for the future.

thank you... I really took your previous considerations into account... The only thing I didn't have time to add was more world assets but that will come hopefully in a future update (along with improved AI)

oh my god, i love this, my absolute favorite game from the jam, if you worked on a multiplayer mode and on a improved AI(this one was easy, got win in my first try) this could be a full game that i would buy on steam or nintendo switch even, actually, i probably would most definitively buy it on nintendo switch to play with friends at get togethers haha

The multiplayer will be tricky since it is beyond mine and the game engine's capabilities... I am planning on updating though with extra weapons and such...

that would be fun too, i followed ya so i can keep updated with it ^^ good luck

I like how you switch into observer mode after death.

If you continue development, you could probably put the AI in weaker ships for the first round.

I am glad you liked it... And i was happy I managed to just make an AI that was not too buggy... If I were to continue development i would first add different weapons spawning at random places...

Pretty fun! I like how each ship is different. I kept on loosing though, so 1: I'm bad, or 2: the game is too difficult

If it makes you feel any better even I have trouble winning in this game... Glad you liked it...