It's just a space-shooter. WIP
Submitted by HAUO (@HAUOCreator) — 12 minutes, 22 seconds before the deadline
Add to collection 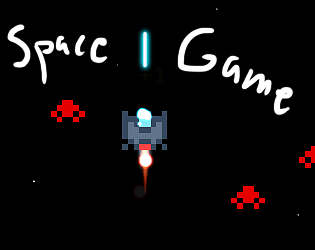 This game was pretty fun to play! The effects of collecting points and 3D asteroids do a lot to make the game look more dynamic. Just as I was getting tired of seeing the basic enemies, larger ones start homing in on me! It was also a pleasant surprise to see enemies shooting back at me, even though they took way too many hits.

I did not notice it at first, but there appears to be a shield system in play, as it absorbs a hit and has to recharge. It adds more depth to have mechanics like that, as they are employed automatically but offer more decision making opportunities to the player.

If you do plan to add more to this game using it as a base, I would like to see power-ups that can be activated with the right mouse button. Lasers, increased shielding, you have several possibilities. I would like to see a way to add replayability to spice up multiple playthroughs as well. Maybe some form of branching paths that can be chosen by flying left or right?

I managed to get a score of 142 and the super end, and found the complete hard stop of an ending to be hilarious. Good job on this!

Thanks for playing! Great to hear that this as a base seems solid to continue on, was what I was mostly hoping for. Am personally quite found of mixing styles and will most likely experiment even more with 3d/2d stuff later on.

I do agree that there are some very big balancing issues at play, the shooting enemies take something like 15 hits, don't know why I thought that was a good idea :P but that stuff comes with testing. Nice that you noticed the shielding! Might have to add a bit of a hint of how it works, but wanted a system that not just "health" and think this regenerative "health" works well in a space-shooter setting, and as you say, changes the way you play depending on the shield status (able to take more/less risks).

A had a very long wish-list of stuff I planned for, spent way to much time thinking up stuff. So power-ups etc are very much in the works :) Was even thinking of having direction ship-upgrades (that changes the ship), in-between missions etc. but we will see. Love the idea with branching paths, now that you brought it up I think I have seen it before in other top-down-shooters, will look-up some examples of this. Would differently add both more repeatability and make the levels themselves more interesting.

Also, great score! The Super End was really there, as you mentioned, for me to have a somewhat of true "ending" to the whole thing :P So added extra spawners that made it basically impossible to continue for long after a while.

Thanks for your thoughtful comments! Hope to update this in the coming weeks.

Finally made it to the super end and got 139.  Loved the sound effects and particles.  I think the music could have been a little better, got a little redundant.  Was impressive that there were multiple different types of enemies.

Thanks for playing! Glad you enjoyed it. Completely agree about the music, but it was that or nothing, and I felt it was just quite without anything. Actually planned for even more enemy types, but then I did the smart thing and cut them out before I wasted all my time on design :P Will continue building on it and see where it takes me.

Yes, it was better than nothing, did you make the music?

Not really-ish, is auto-generated then I edited the result a bit, so cant take full credit for it. Even-so, it adds something, and happy for that.

Awesome game, honestly it is very fun, and even though there isnt "much" as you say it's still great and hell...we had 1 weekend! Good Job

Thank you! I try, for whats there It does function in the way I wanted, so small victories. Wanted to have it as a complete experience with a boss and everything at first, but ya, time :P Will however continue working on it, so will aim to add all the things I had on my wish-list!

Solid game, really liked the juices in it.  The flashing coin/token. The damage particles, and when the asteroid creates little pieces after getting destroyed. Absolutely lovely.

Love that description, thank you for playing :) The details really was what I was going for, as the game itself is nothing special, but was never meant to be anything ground-breaking. Honestly still not quite happy with it all, and want to continue upping the smaller details, still missing sounds/effects all over the place but managed to at-least add the most important ones, but great to hear I'm on the right track.

cool game! shooting and destroying of the enemies feels good! i like the graphics and effects and that you can hold left click to shoot.

Thanks for playing! wow, that's impressive to be honest. I kind of ran-out of time while making the level, but wanted to add a bit more challenge then the first part, so just added a "end" & "super end" that would spawn a unreasonable amount of enemies for those how came that far.

Solid shooter with good game feel. I would have loved to see a power up.

Thanks! Ya, had a looong list of features that I wanted to have in the game... Time was really the main issue there. Really like what I have so far however, so going to keep working on it until it has all the basic features you expect of a space-shooter and more.