Submitted by Hakuzo — 6 days, 16 hours before the deadline
Add to collection 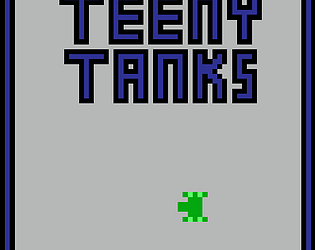 Nice tutorial, haha. As you say, the AI could do with some improvements; make them more trigger happy, I don't think they landed 1 hit on me. :P Otherwise nice simple wee game!

Really cool game.
It reminds me Bomberman but with tanks (but I needed more strategy than Bomberman). =)
Cheers!

I did draw a bit of inspiration from Bomberman for this one ;).

Simple but nice game,  some more improvement in feeling and visual effects then it would be perfect 🤙

Nice submission! I enjoyed the tutorial and got to about 3000 in the endless mode. Cool idea that the colours would change with an increased high score! Aside from it being highly polished, I do have a few critiques to mention:

- The "big block appears right under a little block" does create a weird object that acts like a destructible block, but you can also pass through it? It may be a part of the "blocks spawning under tanks" you mentioned earlier, so it may just resolve itself in the end. ^^;

- The higher speed you attain, the harder it is to move your tank into 1x1 spaces. I'm not sure if that's intentional or not, but that's up to your design.

- I noticed the view's resolution is interpolating, although the view area conforms to the 64x64 requirement. I believe while installing the game mentioned that it was made in GM:S2. Is there a similar work-around akin to "surface_resize(application_surface, 64, 64);" from GM:S1, or does your game use more complex surfaces than a simple line of code could fix?

Other than those random opinions of mine, great job!

I let gms2 scale the viewport on it's own. I'm not advanced enough or have enough knowledge's of surfaces yet. Each block is 8x8.

Really nice game, with an AI improvement, it would be perfect. Well Done!

Nice game, here are the things I think could be changed:

- the big blocks should have a visual effect to show they are destructible, like the little ones, because at first I thought they couldn't be destroyed

- sometimes/often, a big block appears right under a little block you just destroyed

The speed increase adds difficulty by causing you to pick up debuffs by accident.

The solid blocks original were not destructable. I had to change this because of tanks getting stuck in solid blocks. I used this as a work around to the blocks spawning inproperly sometimes. (A bit of a hidden mechanic.)

The other bug of blocks sometimes switching back to solid is due to differences in power level vs remaining block hp. I think it's a logic error somewhere in if checks.

Great game, the AI tanks were dangerous at first, but then I got enough power ups to destroy anything in one hit.

yeah, the balance  curve is reversed until I can work on the AI further.

Great little game! Really enjoyed this - reminded me of old zx spectrum games. Minimalist but effective graphics. Would be great to see this develop!

I plan to expand the enemy AI once I learn more. Other than that, maybe a story mode.

I still need to fix a glitch of blocks spawning under tanks ><.