You know the trouble with Tribbles? They are born pregnant!
Submitted by XdebugX (@XdebugX_Games) — 28 days, 9 hours before the deadline
Add to collection 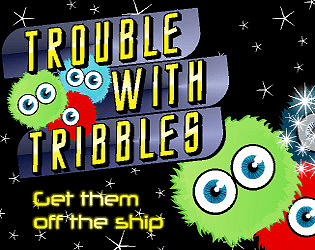 Cute little game! I included it in my LibGDX Jam compilation video series, if you would like to take a look :)

Submitted
The Sounds Of Earth
LikeReply
lordcoppettiSubmitted4 years ago

Really fun puzzle game and easy to get into. Gave me some puyo puyo vibe :P
Perfectly played on the browser.

I just tried the android version and it works particularly well with touch input!
Even you made it harder by changing the rule to match-3, it felt easier (maybe also because it speed up at slower rate? not sure). Anyway this version is quite well balance, good job.

I'm not sure if I can consider thoses changes for rating the game, but anyway I wanted to give you feedback at least!

@Sanoke thanks for the feedback. In the android version I have started the game faster but made it speed up at a slower rate. The Clear the Level mode here on the itch.io page has a bug where the bombs sometimes can't be cleared, I'm not sure if I can submit all these updates that I done for the Android release or not. In the later levels of "Clear the Level" mode the Tribbles are supposed to "breed" so fast that it almost plays like the classic game but with breeding instead of a spawn row at the bottom. I think your idea for, no spawning, but you have to be careful about how you remove them is really good! But I'd have to either create each level or come up with some algorhythm so that it didn't create random levels where there was no possible way to win.

When the spawning of Tribbles got faster and faster and faster, the speed of the other Tribbles falling into place when I removed them did not quite match up to the rate of spawning, perhaps both speeds could be set equally for a fairer play? In addition, I felt that the starting level's spawning rate was very slow, and the action or excitement of the game only built up in the way later stages where I can finally feel that I'm at risk of losing (in Classic mode), but it's alright if you kept the Classic mode mechanism as it is.

What I didn't like was that, in the 'Clear The Level' mode, the additional Tribbles seem to spawn out of nowhere. I was expecting to be careful about the order that I removed the Tribbles in order to clear the levels, but having random Tribbles spawning out of nowhere removed that sense of caution.

Overall, the game was quite fun, good job! I liked the cutesy feel of the game too!

@mmachida Thanks for the feedback! I did end up speeding it up for the android release. I also changed it to a match 3 and fixed a bug in the Clear the Level mode. Not sure if it's allowed to resubmit with these changes or not.@Rupert No problem, no need to apologize. Thanks for playing.

Ah, ok. I apologize. One of my favorite games in the jam btw.

@Rupert It's similar to my Fuzzballs game, I said that in the first posts in my Dev Log. But the gameplay is different and code was almost 95% all new code. I did use some of the same graphics, but that's not against the rules.

I did level 110+ in classic mode (the game over screen doesn't show the level, so I don't know exactly): Score

Great game, I like the music and the art, and how the Tribbles logic works after you destroy some color. And thank you for allowing us to destroy colors while they are grouping, it helps a lot when it gets fast

I think the level 10 could be the level 20 speed, because it takes a long time to get there and maybe a super very fast speed at lvl 50+ (just for no infinite progression).

Very polished match-3 (match-2? :)) game. It took me a bit to figure out how things collapse. It gets really really hectic for me at about level 20, but that's probably because i'm old :)

Hi CiderPunk, it slowly gets faster. Hard to keep up at about level 25.

Does it have any progression? i got to level 17 or something but couldn't see any difference? should speed up surely?