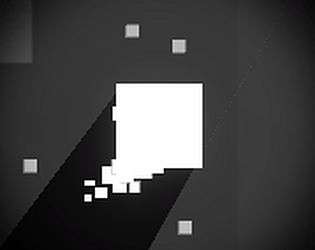 Everything about this game was pitch perfect. The minimalist art, the mechanic, the controls, the sound; I feel like with a bunch more levels, this could easily be a puzzle platformer you'd see on Steam. The raycast shadows were awesome looking, too.

I love that it's kinda like Super Meat Boy, but your ghost serves more of a purpose than just taunting you. I could gush for a while about this mechanic, and I think you've done a decent job exploring it. I'm sure there are a million other ways you could think of using it. Certainly there could be room for enemies or turrets that you could block with your body. Also maybe if there was some way to turn the bodies into moving platforms, I think there's a big possibility space there.

Now that I've gushed for a while, there were a couple things that I think could be improved. The most important is that I think the time limit should go. I know it's for the jam, but I think the difficulty in the game should come from figured out how to use your respawns to get all the orbs and get to the end (maybe even a reward for beating the par number or something). I think having a time limit just kind of muddies the mechanic and makes it more of a blitz than a thoughtful platformer.

Second thing is that the green squares are too small. This wouldn't be an issue if it wasn't for the time limit, but there were a few times where I nearly ran over on time trying to make the block get in the exit.

Thx for the amazing feedback! Yes indeed there are a lot more possibilities but I prefer  polish over quantity and I didn't have that much time to make the game. Still contemplating about if  I am gonna develop this game further. I think the time limit gave a really tense feeling to the game tough. Maybe a longer time limit? Might be able too put some story into it as well if the time limit is longer.

Dhamm Nice lvl dising. When I was playing I was sitting on the tip of my chair. Love it. Only the negetive thing was: I found it divecult to know to open the doors, you can improve it with: lvl design or something like a text, but text is not a good thing :P. But realy cool game! Nice shadow effect.

Ohw and about the music. It would be nice if the music just continues when gaming. The reset everytime you die is "anoing". Good game.

That's good to hear. I'll try to find a way of letting the player know how to open the doors! thx for playing :D

Just some minor things that bothered me: Not being able to reset the level at any given time, the shadow thing sometimes flickers, the cursor is visible.

But overall great job, definately one of the best games I tried so far :D

I totally forgot about a level reset haha thx for mentioning! Jeh the shadow wasn't too good but I felt it worked really well for the aesthetic so I kept it in. Thx for playing and the feedback!

Great job! Loved the minimal style of everything,  and the particle effects on the player were awesome!
The sacrifice mechanic helped bring something special to the game, so that it wasn't just an ordinary puzzle platformer.
The player movement was something I felt wasn't too good. Perhaps speed it up a little? And having a greater gravity applied to the character when falling sounds kinda weird, but it really helps getting rid of that sort of floaty feel when falling, whilst also letting the player jump high.
And maybe make the green zone two cells wide? Found it a little annoying a few times tryna get in... but that was rare so maybe not such a big deal haha

Thank your playing! For the green square being 1 block I really liked it so that you could perfectly fit into the level. For the player movement I could tweak it indeed too make it a little more fluent. Thx for the feedback!

Thank you for playing! I actually did the art on the last day and didn't have time to redo the level blocks thx for the feedback!

Perfect excuse to use a square for a character, and a really original 'building' concept. I didn't like having a time limit, but it had to be there for the jam I guess. I didn't get far enough to see all the applications for the block placing, but it seems really flexible to maybe block projectiles or even safeguard lemmings-like npcs in an escort mission. I think  being able to manipulate the block would be cool, perhaps through intentionally dying by touching a lethal liquid that has the side effect of inflating your blocky corpse to 3x the size, or one making you bouncy or  sticky for other platforming opportunities. You could extend the mechanics by playing physics interactions that work one way when you hit the environment and another when you hit your dropped blocks. Also, there needs to be some sort of flood of the boxes at some point. It's required. Thanks for sharing this.

Thx for playing! These are great ideas!

Really cool concept, using lost lives as means to progress.  Apart from some platforms that are not very visible, the game is well put together. Good job.

Thx for playing! Will see how I can make the platforms more visible

Wow this is really good, and fully produced with nice music and polish effects. Great job!

Thank you! Any things that could have been better?

I found the death to spawn a block mechanic a bit finnicky to work with, maybe it was just not well introduced, but jumping and respawning in the air feels a bit hard to pull off consistenty.

Maybe adding gravity to the spawned blocks (and changing the level design appropriately) would make it feel better, not sure.

Maybe a slow motion effect could have worked. Might tinker with it a bit!

A fun 2D platformer with the twist of sacrificing lives in order to advance trough the levels.

To play unrar the folder called "RightOnTime" in this folder there is a RightOnTime.exe double click to launch! Have fun!

I suggest figuring out the controls and the mechanics of  the game just from trying the levels! I made the levels so that if you have played 2D platformers before it should be very intuitive! So if you want this experience don't read the controls right below.

Controls: intuitive controls 'a' & 'd' to move, space to jump, 'E' to respawn

Great game, I really enjoyed it, first game in this jam I had fun until the end of the game, nice work.

Thank you! Any feedback on what could have been better?

Yeah, sometimes the game wont respond to the jump command, sometimes happened when I was at the edge of a plataform or was trying to perform a triple jump. but after that, is all good.