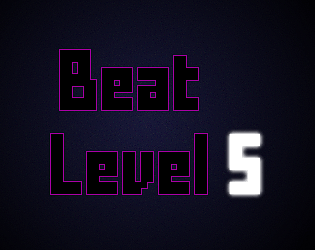 I really liked this in concept, but I think starting the players on the highest difficulty level and forcing them to shift down may be a bit demoralizing. Also, the idea that the level goes up when you die seems counterintuitive, because your automatic response is to then just shift down a couple times.

The art and the music is great. It feels like Blade Runner meets Short Circuit meets Tron. The mechanics in general are pretty solid. The biggest issue I had was the fall speed. You feel like a sack of lead potatoes. This is especially pronounced when you hit the floor portal and immediately zoom from the ceiling all the way back through the floor portal.

Also, I hit escape to pause it and couldn't figure out how to resume again? I ended up hitting restart, which erased my progress, so I ended up not beating the game.

In the end, it was a super cool game that feels like it could use a few small tweaks to make it excellent.

Yea those are some major flaws with the main mechanic. The level numbering should be seen more as just labels I guess, otherwise you there are issues with attached meaning to the numbers. For example if the direction of the numbers were reversed, it would make more sense when you die and go down a level instead of up, but then the enemies are easier on the higher levels which is counter intuitive.
And even with the fact that the player is technically forced to shift down to the bottom level from the start every time, I think it's necessary that it is the player making that decision and consequently understanding that the initial level is sort of the "base reality" in which the real meta objective takes place, rather than the game deciding for them and perhaps resulting in confusion. Also the time in previous levels has to be slowed down so much, in order to be fair to the player, that it might as well just be paused. Overall I'd say the mechanic is more fun in theory than it is in practice haha.

Just have to press escape again to exit pause menu, but I definitely should have made that clear - sorry for that!

I'll pass on your compliments to the rest of the team! Thanks for playing :)

I would have liked a bit less gravity but I have a lot of fun regardless.

Yea the gravity seems to be a recurring issue haha, it probably is a little too high :/
Thanks for playing, and I'm glad you enjoyed it!

This is really fun! Reminds of some old flash games I wasted days on :)

Thank you!
I'm glad you had a good time with the game :D

You might want to add a non-HD setting, I have a low-end PC and even on 720 the game bugged so much I couldn't even finish #1.

What sort of issues were you experiencing? Lag or crashes?

MASSIVE Lags. And a framerate of maybe 6 or 7 FPS.

Hmm sorry to hear that. I guess it's cas the game is a little bit demanding, in terms of having a bunch of levels active at the same time. I didn't have enough time at the end to optimise the whole thing unfortunately :/

Totally get it. Our game (Magifuse) also ran out of time and now we had to upload it with the placeholder-sprites.

Well, your game still looked pretty cool from what I saw.

This was legitimately one of the top 3 games of the 30 or 40 I've played here so far. Very well done.

Wow! Thank you very much, glad you enjoyed it!