Defuse the bomb in under 30 seconds!
Submitted by Straightea (@fledron), Coatedpolecat, SwagWaschbaer — 5 hours, 20 minutes before the deadline
Add to collection 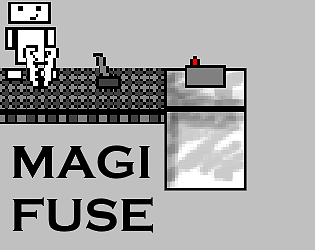 In such a game where platforming is critical the controls are essential. I think the platforming is a little unpredictable and floaty, especially with the double jumps - never know how far you're able to prance and it seems that hitting a wall allows you to shoot up really high. Nice use of audio to enhance the gameplay, good use of the counting down beep to lend a sense of urgency, and the gameplay was pretty tight with nice escalating difficulty.  There was one part which felt a little unfair when the player gets hit with a bullet right at the start of the level. Love the explosion effect too. Graphics could use a bit of touch up but for what it was it was serviceable and didn't detract from the gameplay.

Okay thank you for the feedback!

There WILL be better graphics (in fact, there are already), but we run out of time and we can't patch them in until the voting for the winner of the jam has ended. because that would be against the rules.

Pretty cool little game. I think you had one of the better implementations of the theme. I played through a decent number of levels and enjoyed it. I think the art's a little bland, but it works. The sound design is great and really sets the tone. The only sound that didn't feel all that great was the turret, kinda lacked punch.

I didn't really have a problem with the movement once I got used to it. It kinda felt like the floaty-ness added an extra dynamic to the difficulty, where you had to be careful how you moved or you'd wind up in a trap or spending a while floating down from a high jump.

The main thing I didn't really get was the intro screen with all the power-ups. Were they supposed to be in game? Was I turning them on or off at the beginning? Didn't quite get it. Maybe they show up later (I probably only played 6 or 7 of the levels).

Either way, pretty solid effort. I think with some more inspired artwork and a few added mechanics, you could make a pretty neat little game that could be worth selling.

Okay thank you for the feedback, I will try to improve it!

Nice game. It was fun :D

I would improve the player movement, feels slippery

That's what everyone says xD What exactly is bad about the movement? Does it feel like the gravity is too low or high? Or the acceleration of the player?

Like the player has too much inertia. You relase the movement key and it keeps going. As you were walking  on ice

Okay, thank you I will do my best to fix it.

Apologies for the art, we couldn't upgrade it until the jam end, due to bugs with the timer in my country.

It's nice game, but it needs better player movement.

I will look what I can do to improve it, thank you for the feedback!

Could you maybe specify what exactly feels wrong? I feel it too, but I am not exactly sure what makes it feel that way. Maybe the Player acceleration?

Sure. Firstly, the player doesn't seem to accelerate unless it's touching the ground. That makes the character almost uncontrollable after leaving the ground.  Also that makes jumping on higher platforms very tricky because there is not enough velocity to make the jump. Secondly, the jump height is too small. I understand there is a double jump, but even the first obstacle in the game is frustrating to overcome. Also, I am not sure if this was intended, but it's possible to wall climb, making some platforming sections meaningless (like the the small platforms on level 9).

I would suggest some improvements: make the player accelerate faster both on ground and air, increase the gravity and make the character jump higher. That way the player should navigate quicker and with confidence through the level. Maybe add some dust particles when the player touches the ground.

As I stated before, It's a nice game, and I hope you can find this feedback useful in some way.

Thank you for that feedbacl, I will do my best to fix it. Maybe take a look at the game in a week and tell me how it feels then, when iI fixed it ;)

Alright, I'm looking forward to it.

Nice job! The 30-second theme is well implemented here. The counter and the audio give you a sense of urgency.

As for things to improve: I think the speed spell is bugged. I tried to use it while looking at the left, but it always dashes to the right. Movement doesn't feel right, either. Jumps feel floaty.

Oh yes that's bugged. Sorry for that, I will fix when rating is over for fairness. I will try to make movement better. Maybe higher gravity.

Jump should be smoother now.

A platformer game where you have to defuse a bomb in under 30 seconds, with the particularity that you can use magic spells to help you.

Turrets will turn into your direction and shoot at you. But you can destroy them by interacting with them 5 times.