Right now, when you open a page with an embedded HTML5 game that has the "Automatically start on page load" option disabled (i.e. a game that requires a click to play), the "click to play" screen shows at the size of the embedded game.

In contrast, if you open a page of an HTML5 game that runs in fullscreen ("Click to launch in fullscreen"), the "click to play" screen shows at a small size.

My suggestion: allow creators to use the small size for the "click to play" screen, even for not-fullscreen games. The canvas would then resize to the correct size when the game is run.

The reason for this suggestion is that sometimes, the embed is simply too big. I always fear that someone may actually think that there's nothing else in the page other than the playable game. With a smaller embed, it's obvious that there's information under the game area.

Does anyone have any ideas or tips on how to create the backend for the games? Any useful framework, hosting service...? Thanks!

Characters auto-attack when they are not moving. The cleric doesn't attack, but heals itself or the others.

Oh, too bad. With that in mind, my opinion is to group them, then. I believe that Google drives the most traffic for most people, so keeping Yandex with that level of detail won't be that effective (specially since a lot of people won't even understand the search terms).

Of course, the ideal scenario would be to have some way to group or separate the links with a button or something, but that's probably too much work.

Thanks for the clarification.

@leafo That would be useful, indeed. The downside is that we would lose the search keywords. I don't find them very useful right now because I don't understand them (so, in my specific case, I agree with grouping these links), but some people may be able to read them. How's Google being handled?

Note: I thought I had published this before, but it seems that I didn't save it. Sorry if it gets posted twice.

I'm noticing some really weird links in the referrers of one of my games. They seem like spam links to me: 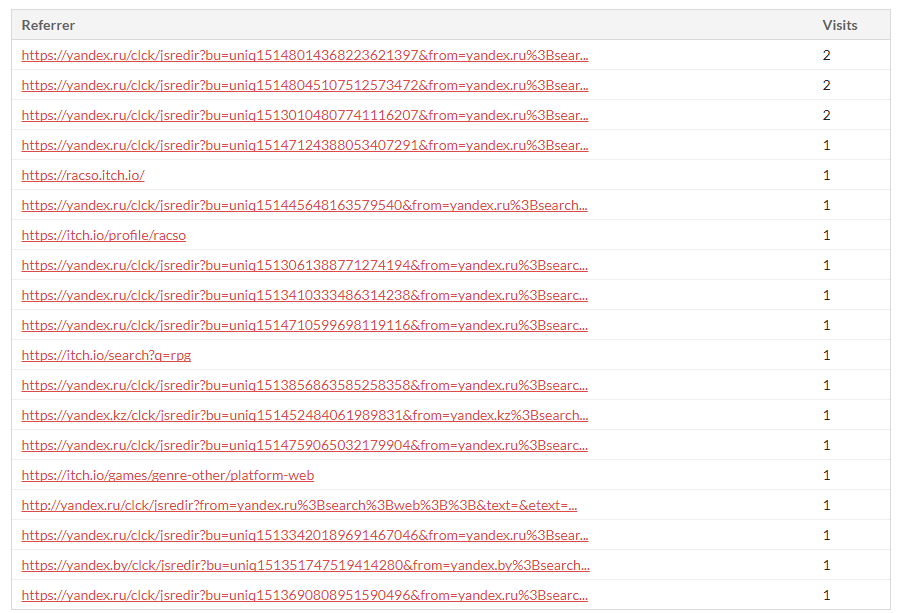 Perhaps Itch.io could simply ignore the links that come from those domains?

Hi! Same question here. I'd like to learn from your orbits mechanics :D

Thanks for the answer! I'll probably start on time anyway, as I haven't been able to work in the project yet (sigh).

I've just played the game and got the 3.5 endings :) Nice story! The "text written with the stone" thing was a cool plot-twist!

Are you talking about this entry? https://itch.io/jam/minimalistic-jam-2/rate/208922 I played it and it wasn't a virus. I got, however, the standard Windows warning about unknown publishers.

Thanks a lot! I'm glad you liked the game :)

Truth is, the "Chapter 1" thing was just a way to set the game mood a bit more, especially given that it ends with a cliffhanger. However, some people have told me that they would like to know more about the story, so I may, in fact, continue the series at some point.

The simplicity in those details you mention were because of time. Sadly, I could only work in  the game during the last week of the IGMC, so I had to cut as many corners as I could and prioritize the vital aspects of the game.

Hi. I'm about to start developing a Missile Command based game as part of the current challenge in GameDev.net: https://www.gamedev.net/forums/topic/693936-2018-new-year-challenge-missile-comm...

The thing is, the MCT jam hasn't started yet. My question is: will this jam require games to be fully developed during the jam period, or would it be OK if I have an early start?

Same error here. Also, images aren't loading properly in the website. It seems to me that some SSL certificate expired for Itch and things are breaking because of that.

I already had reviewed yours. Good luck!

OK, this is a complex entry, which is quite cool, as it can turn into a full-fledged turn-based strategy game with some work! The bad thing is that there are several elements that make playing quite difficult:

All in all, this is a quite impressive effort. I hope you continue working on it for a bit! Good luck!

Love the "u win" screen haha

Good effort, and yes, the stick figures were used quite a bit in Flash videos and games some years ago! Good audio, too! Did you make it?

The game seems to be difficult, but it's actually quite playable once you know the behavior of your enemies.

Hi. The app is asking me for login.

I've recently found that non QWERTY keyboards are more common than I thought. It's obvious that, indeed, I must somehow support key mapping. For now, I hope that you could at least play a bit easier with the fire wizards (which use the arrows for movement).

I forgot to mention something: I don't think the countdown timer is useful. I think it should instead be a stopwatch, measuring how much time did it take you to finish the puzzle (instead of limiting the player's time to finish it).

A simple and calm game. I especially liked how you used icons of modern games as the images. That mix of modern and antique somehow transports you to old times.

Hi everybody! Here's my entry: https://racso.itch.io/power-word-pong - I'll be playing and rating your entries. If someone plays mine, please reply to this post with your game so I can check it out, too!

This is insanely funny haha. The consequences of both a correct and an incorrect pizza are hilarious!

Hi everybody! In case you are curious, I published a post-mortem explaining my development process of Power Word: Pong. You can read it here.

I hope you have fun playing the game! As always, your feedback is more than welcome!

No, there's no protection. I've been thinking about that since the beginning and have some ideas, but nothing implemented yet. What I do right now is to put some more caches myself.

And yes, confirmation would be nice. Or requiring those actions to click a button instead. Thanks!

Yeah, the thing is that I didn't know how to map 3 keys to the same name (afaik, Unity allows 2), and didn't bother to look for options about that because I thought 2 options were enough. I've learned my lesson :)

By the way: Solmir (just below) took every geocache in the game and hid them quite away from the starting point. Because of that, you may have lost the gameplay of searching and finding caches. It's obvious that I need to think how to deal with this kind of scenarios, but, for now, I've left some extra caches in the world, just in case anyone (or you, again) takes a look now.

I don't know what to say about "Up" as a jump button. Before, I had set Space as the jump button, but changed it based on another comment. Each person has its own taste, I guess. Anyway, you can change the controls when you run the game in Windows.

Woa, you really did an incredible job finding everyone's caches! I'm happy you enjoyed the game this much!

About the floor: you got me! The floor isn't really infinite because it was the first thing I made in the game, and at that time I wasn't sure on how to handle its real-time generation. Therefore, it isn't procedural, but it spawns from -10k to 10k. You actually discovered the end of the world! (well, the sky is infinite, and since it grows in every direction, the world itself is infinite too)

Apart from the floor issue, you've left me with some improvements to do. First, I need to implement a "Max score" system to record each player's best score, as he may lose it if another player steals his caches. Surely, the score that counts is the current one (which goes up and down), but having a souvenir of the best score a person ever had would be nice. Another thing I need to define is how to deal with every cache being too far (like they are right now), as new players won't be able to find anything at all unless they put a lot of effort into it.

About the compass: yeah, that's difficult to handle, specially with screens being so different. I have some ideas for improving the UI (and also for the compass itself) that I may implement in the future.

Thanks a lot for playing and for the feedback!

What do you think is backward?

Sorry about that! I appreciate you taking the time to review the game, even if in the end you don't like it.

Hi! About finding the caches: it's not impossible because I put a compass! You probably missed it as it is new. When you press Esc to see the information, in the upper right corner there's a compass that shows you the amount of caches in every direction and the distance to the closest one. That means that the players always have an idea of where to find, but they don't know how the path to the caches is (for example, you can hide a cache in an isolated spot that requires you to arrive from the top, so players trying to arrive in a straight line won't be able to reach it).

Haha, this was funny.

I played the game without knowing it's actually random; the signal got to 5 close to the cat, without having anything in my hand. Confused, I came here and read Naomi's comment and your answer. I'm not sure on what to think about the game being fully random. On one side, is the ultimate trolling, and it's truly faithful to the comic. On the other side, it's kind of disappointing as you think that you may use your wits to triangulate the ideal position only to find that it doesn't actually exist.

I've created a jam pos-mortem. If you're curious, you can read it here: https://racso.itch.io/skateboard/devlog/16038/jam-post-mortem.

By the way: congratulations to everybody for finishing the jam!

Reply
xkcd Game Jam community · Posted in Our entry (xkcd vr) got featured in the press!
Racso4 years ago

If I understand correctly, you also made the graphics and the music. Well, congratulations on that!

I agree with Cosmologicon in that the game isn't challenging. I've never played Katamari, so I don't really know how do they handle challenge on it. Perhaps with a timer, so you have to plan a route to absorb everything as fast as possible?