A fun little game
Submitted by nnnikitaaa — 12 hours, 53 minutes before the deadline
Add to collection 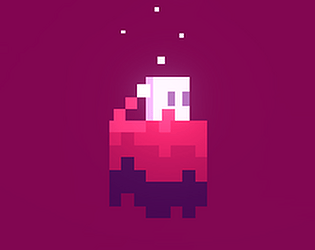 Nice game ! The art style is so good, well done ! I hope you will add a music to this game later.

Submitted
Those who dig
LikeReply
Turbonblue328 days ago

Followed a very basic rule of: keeping it simple. I enjoyed the mechanic and I really think you should keep up the good work, my friend! Good luck to you

I really love simple design, thanks!

man do i love this. talk about perfection xD. you the winner for sure!! keep it up :D

Love it! Fun to play and great mechanic

Submitted
The Show Must Go On
LikeReply
nnnikitaaaDeveloper330 days ago

Love this submission! Beautiful style and great concept. Only issue I had was that the enemies/spikes in the other realm would sometimes still kill me if I was hovering over to hide them but maybe I was just playing it wrong too

The thing is that you can only see another dimension, so if you hover over spikes they still are able to kill you as long as you are in the same dimension as they are...)

ah guess i just misunderstood. Maybe an outline of both your dimension and the other on hover over would be clearer? could just be me. loved it tho

Solid 4.5 / 5 game.
This is a great concept and probably one of the few games that hit the Theme dead on.
I wish there could have been some music to chill to but I understand the time constraints.
Is it too early to congratulate you on a flawless victory?

Will see, will see... Although I wouldn't call it flawless, I still have some things to improve and make it even better)

Hi it's a very good game.

It remind me a lot a game made for another game jam: https://brackeysgames.itch.io/detective-truth

By the way your game is perfect. Gameplay mechanics are good, art style too.

You must publish it.

Submitted
Death Is A New Begining
LikeReply
nnnikitaaaDeveloper330 days ago

Amazing game, one of the best entries imo. The player controls are fantastic, the aesthetic of the game was beautiful, and the take on the theme is very clever.

The spawnpoint system felt very inconsistent to me. Often it wouldn't create the spawnpoint and I wouldn't realize it until too late x_x, which would send me back to the start of the level. This was pretty frustrating. It even happened twice in a row to me (sending me to my previous spawn point and then the start of the level) causing me to audibly "bruuuh". Unfortunately this is what eventually killed my play session prematurely, so I didn't get to complete your game.

Some audio and visual feedback when the spawnpoint is set would be nice. You can't tell it until you move off of the position which lead me to some confusion the first time as to whether or not it worked (causing me to click three more times looking around for some kind of feedback).

Enemies don't look like enemies. I initially thought they were friendly and was going to try and interact with one until the text corrected my assumption. This was confusing and a little odd throughout the play session.

I couldn't tell when I was and wasn't able to collect the little collectables. Sometimes I could see them in both dimensions, but not collect them in the one that I was currently in. At first I assumed I could only collect them in a specific dimension, but then it happened in the other, so I just started ignoring them.

Oh, I think I should work a little bit more on the level what explains game mechanics.

You couldn't set a spawn probably because you were out of helf points ( 3 little dots above the player indicate them, so then you die with spawn point set you lose one little dot, when you're out of dots you can't set a spawn ) Each of those little collactables adds you 1 helf point, so you wasn't able to collect them because you had maximum amount of health points.

And I totally forgot to add feedback than setting a spawn point, I'll fix it.

Thanks for you feedback, I really appreciate it

Ahh. I understand now. :) Makes sense why I was having such a hard time of it, lol. Thank you for explaining it to me.

This game is so nice, addictive, and cute art style. The concept is so smart. NIce game <3

Try and rate our game as well

This is so great! What a good game, and it feels really polished and the visuals are amazing!

This Game i have no other words to describe it FANTASTIC !

I like the parallel world idea and that you have to die to switch between the worlds Great game enjoyed playing it !

A lot of you were asking to make sounds.

Well, doesn't really matter now, the sounds are out, go and check out the game!

The aesthetic of the game is awesome. Controls are good, the concept is nice. It was very pleasant to play, well done =D

Submitted
Those who dig
LikeReply
Bp026Submitted331 days ago(+1)

Like the art style and the game play the speed of movement can be hard to control at some times but overall a good game that has potential. If possible a play through of my game and rate would be helpful. Thanks!

Was a bit confusing on when you needed the other dimension but i quickly got the hang of it !

with some sound effects it would be even better :D

Concept is cool, execution could improve, like all games. Very Minimalistic, understandable for a game jam, but Music is lacking :( Getting you a zero in that department sadly.

Guess what? It has music now!