Art  look nice and well done :)
Fun Idea, would be cool if there is more interaction. Mabye you could grab some Items and hide them aswell so the chef has to first serach them ^^

First of all thank you for taking the time and posting such long and detailed comments, I saw you did that for many games !
Also its a pleasure to read your texts ^^ !

Great thats what I want to archive with puzzle games, that they are pretty hard but not illogical hard.
wow thank you for the comparison with Baba is You, I didnt know about the game but I looked it up and it looks awesome :D
Yea I think most puzzle games should have the option to show you how its done, because it can get frustrating. so instead of then having to google up a solution, which in most cases is going to happen then, you can view it in game! I wanted to represent that in my game aswell.

To the speed change: well actually that was just a bug fix solution scince on some PCs the character would move was to slow/fast.
I dont know why but it already was different in the unity editor and the full build game. So I implemented it for people having this issue.
But I see you really liked it afterwards as the mechanism you described, so Im defenitely going to think about such things in the future aswell, thank you !

Sadly some of the sound effects have gone missing in the final build aswell, I really could find anything on that :(

So overall im really happy to see people liked it and yea I did worked quiet a lot on this game ! so thank you again for all you feedback !

honestly this game look so polished its amazing !
even the main menu, which already made me laught.
every single hit just pops and makes you feel good.
also the variations of color added a nice touch to it !

However it took me some time to figure out how the time system works. I was wondering why I sometimes could take some hits and then sometimes suddenly die from the first hit.

For my experience the grappling gun was the number one to go, scince the pistol was powerful but costs you some time every shot.

If youd add a little "comeback" mechanic like collection money each run, that you can spend on a store for characters for eg. I could easily see this game on a platform like steam :D !

Thank you, thats good to hear !
Yea I felt like its a good Idea to provide the solutions in case someone gets stuck and really wants to know :)

thank you, yea i felt like throwing a lowpass filter on the music would would keep it a little bit more interesting xD !

Thank you ! I love that part in puzzle games aswell.
The shooting level was mainly just for fun because i was so excited when i got the shoot mechanics work properly ^^
however there is a litte functionality to it. It lets you know that you can (and sometimes have to) shoot your clones, aswell as that you can shoot over this certain piece of wall :)

Yea totally get you on the music part!

For the speed, that was just a quick hotfix I had to do because sometimes the character moves to fast/slow on some PCs.
I should have made more clear that you should only change it, if you are experiencing this kind of behaviour.
Yea he kinda gets the ability to move through walls ^^

Being honest the 3rd level is the hardest I made, after I building it in Unity I had to reconstruct the solution for myself ^^

Ive gon ahead and uploadet solution 3 and 5 to a dropbox if you want you can check them out !

Really neat !
I enjoy puzzle games, and the look to yours is really lovely !
the audio is chilled and it is fun to play.

for my taste the levels could have been harder, i kinda just rushed through these levels :D
nevertheless really nice game !

I also did a puzzle game, check it out if you want. (spoiler: you did a way better job on the background music)

That was really fun ! simple but super enjoyable game.

The music is kinda odd for a dungeon game, but im totally on it ! :D

I wasnt sure at the end if that really was the end, so i waited a bit to see if there is more.

well the gameplay is not really exciting, and gets kinda boring quick.
the game doesnt look to bad but it would need some more spice !
the big carrot was a nice addition but it needs some more elements like enemies that you have to worry about.
also if the character could jump, that would add a lot more fun walking through the labyrinth.

the game has a certain feeling to it but lacks a bit of diversity.

Thank you a lot !! thats super thrilling to hear :)

Hm you did everything right, when you click the solution button a Video with a black background should pop up aswell as the play buttons.
So the Video is just missing, thats definitely a bug :(

thats a pitty were their any levels you couldnt solve :D ?

Great ! well when i set it to 100 the chacter can move right through walls ^^

Thank you i totally get you on the audio part !
wasnt the best Idea but i couldnt find something better in time.
definitely gonna throw in a mute button after the Jam xd

Thank you ! I hope you could play without needing to ajust the characters move speed, thats a weird bug i couldnt fix :)

yea i know, i was thinking to implement a mute option ^^ but was a bit to late for that :D

Ive uploaded a quick fix, you can now change the speed to your desire, in game !!

man that feels so bad, when i did the final build it was perfect on my PC.  please let me know if it is playable for you now ! much thanks again !

OMG well thank you for letting me know !! Thats definitely not intendet D:
I experienced the character moveing to fast/to slow but couldnt fix it consistently.

I certainly hope so and will come up with a fix ! ty

Was a bit confusing on when you needed the other dimension but i quickly got the hang of it !

with some sound effects it would be even better :D

Cool art and nice Idea, but the controls werent to good, and i figures out that you can just shoot yourself up the hole level ^^

I feel like the game could just some powerups to increases things like throwing distance and stuff.

was fun to play.

Was really fun ! Killing a lot of Zombies is always fun !

I just think it was a bit too much you had to kill to get the key, nevertheless felt really good.

Ah I see :D
I guess with a little Tutorial and maybe some more difficulties or some risk/reward mechanics, like some sort of corrupted souls that can give extra points or make you loose some, it could be really fun.

Man that is super calming and relaxing, loved it !

Great for occasionally playing ! I feel like it could actually have a kind of  shop system where you could spend your shrimps on xD buying bigger fish to play, that would add a little grinding aspect to it. that would be fun for an occasionally game :D

Oh well, the Idea is cool and it goes in hand with the theme.

Now in my experience the pick ups never did any good, that got quiet annoying over time. additionally i feel like the impact of a bad pick up should decay over time, that zooming effect got really annyoing if it lasts forever.

the Ocean level was really confusing and had no real purpose imo.

so with a bit rework of the mechanics, it could be a really interesting game !

but I totally didnt get what to do xd
does it contine infinitely ? or is there a proper end ?

Awesome Graphics !! had a portal feeling with a nature mystic aspect, which I love !
simple but fun. didnt really matched the theme but i can see where you wanted to go with it.
the ambient sound is also really great and fits the game, ide just make sure that the total volume doesnt start at 0 (i had to turn it on first). also the music didnt loop for me and the music suddenly stopped. maybe it just took me too long passing the moveing platform part xd

Really funny concept. loved the animations! got some bugs but could finish it nonetheless.

WOW, really.  the art.. i love it !
nice little story alswell. however the gameplay was not amazing. maybe some more combat moves would have done it. Also i feel like the water shouldnt be that dangerous xd ok its medieval times so who knows.  really awsome work for the time, you were a team of 3 ppl right ? really great only downside imo is the lack of gameplay elements.

really nice, an interestic mechanic. was fun to play! however I think the switch was a bit inconsistent at some part, and the gameplay got a bit repetitiv after some time. also the archers totally got me xd

I also really like the Idea, in fact i did something simiar :D So its cool to see someone did something like this witch a different touch! Downside definitely is the pathfinding, also in the 2nd level the third character wouldnt spawn until after some more tries. Nice setting, could Idea liked it!

Really nice Concept, managed to get to, what seems to be the end. maybe you could add a Victory Screen on the final flag. wasnt sure if there is more :)

also if found a minor bug: after the 6th checkpoint, behind the big lava pile where it goes down like stairs. if you touch the dirt that is spaced 2 blocks it kills you like the lava. 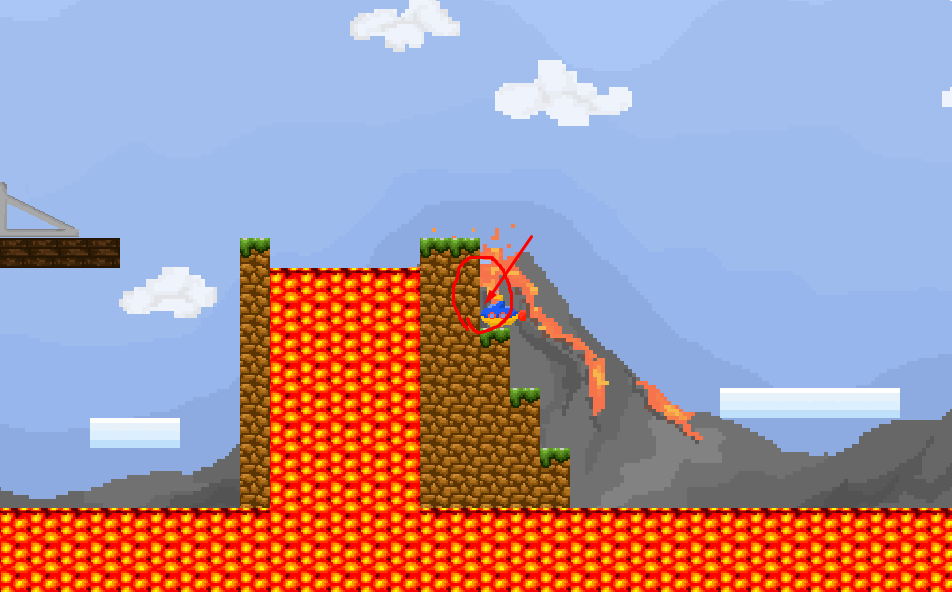 Also what is your speed record in this game ?

Cool Grafiks and I liked the Idea but having a tutorial or player supporting audio would be crucial here.

also after playing 3 Cards i couldnt play anymore. I dont know if thats a bug, the last played Card seemed to stuck in the middle of the pod.

Cool Idea I like it, but as many said really hard ^^

Thank you ! it is actually not that hard I am still a beginner myself.

Ah alright ;) I hope the clues didnt feel to subtly

Really nice game the pots were a bit confusing at first. nice music and nice art style in the intro !

Thank you ! yea  that was really hard and im glad that it is kind of working rn :) oh yea the rearrangeing is not working properly, Thank you for the feedback !

Thank you so much ! that is really nice to hear, im glad you enjoyed it ! I thought finding some Items could have been to hard :) how was your ending ?