Create life with the help of animals
Submitted by Drillu, Neitron (@LonellyHippo), AstroBob — 6 hours, 40 minutes before the deadline
Add to collection 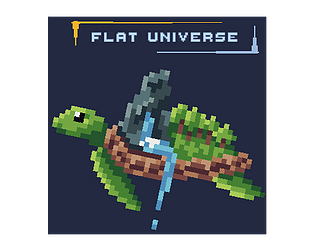 First it was a bit confusing. Once I got the idea, It was really fun to play. Nice gameplay!

Super hectic and fun game. Things definitely snowball out of control at the end. I don't even know how but my radiation went from near 0 to maxed out right when Earth was on the verge of growing so I lost, but it was probably my fault lol. Big ups for making all of the planets be animals, I thought that was cute.

Getting elements into the creation bubbles was a bit annoying but it kinda added to the challenge so I'm on the fence about it. I think this game would benefit a bit from a difficulty slider/options and definitely a pause menu, since my hands were getting kinda tired doing it in one go and I could've used a break haha.

Thank you for playing! I Glad you liked it and I'm sorry you lost it. balancing is a real pain, especially for 7 days jam event. I asked a few friends to play it, and one of them even finished it! It was 4 hrs before submission, I had time only for those stupid help cards thing. I wish I could do mode! Anyway, thank you very much for the feedback!

Nice game ! You found a way to introduce space creation I love it ! The idea to hatch planet eggs is really cute also ! Unfortunately I could not manage to go beyond the mars phase, because I think that my atoms were spawning out of the screen space, so I couldn't use them. I ended with 2 particles on all my attempts...

I would love to play the game and finish it once this is solved !

Submitted
This Fruit Saved My Life!
LikeReply
NeitronDeveloper1 year ago

Hi! Thanks for the comment! Did you try to zoom out with the mouse wheel or move the camera by the arrow keys? All the particles are spawned inside the asteroid belt, only you can move them outside, maybe you moved them and lost them?

I did not try to zoom out, or didn't manage to at least. I tried several times because I thought it was my bad and that I pushed them, but I didn't, It happened several times...

Very cute and fun game ☺️ My favourite on this jam!)

Its a really cool idea. I like that you can burn elements. At first it wasn't very intuitive but then I read the manual and I knew what I had to to. At first I wondered why Venus is an egg and why there wasn't a new planet to build but then I read the manual again and I knew I have to hatch the egg with heat and without radiation. I thought I have to build asteroids so I built some. I didn't play it to the end. What use do the asteroids have and how is radiation created?

Thank you for playing! If u forget gather heat from planets, they get overheated, and produce radiation, asteroids absorb a little bit of the radiation. The more asteroids you have the more radiation the asteroid belt absorbs.

Really great idea and a great implementation. I think it fits extremely well with the theme. Only how do you get out of the game? Except to use the task manager?

Hi! Thank you for playing) I think alt f4 the only way😂

A little bit complicated at first sight, but after a while it really turns me on. Very good idea and interesting gameplay. It must be on any of mobile platforms.

Thanks for playing my game!

Man, there's a lot of stuff going on. The concept for this game is so cool. The game is pretty tough to get into, but you figure it out after a little while. The first time reading the tutorial didn't really help me, but I read it again after building like 3 things and it made a lot more sense. You mostly figure out the game as you go.

The art for everything was great. The dotted lines for the orbit were nice, the orange line was so helpful for finding where the outer planets currently were. Pixel art animal forms for each of the planets is a really neat idea that adds a lot of charm to the game. The art for the elements is sweet and pretty unique with their particles that trail behind them. I like how unique the 5 little wedges that make up the outline of them are. Same with the cool ring of the crafting areas for the planets. They could have just been simple circles, but you made them unique and it looks so much better for it. The colour palette for the different types of elements was pretty good. It was easy enough to tell what type every little orb was just from a glance without having to zoom in to read its name. The particles fading to a slightly different colour is subtle effect, but quite nice.

The text was a nice font and the gradient colours look great, but the font size was just too small for the requirements for the planets and the names of the molecules. The little trivia things for the planets is neat, but a lot of the text doesn't fit inside the boxes.

The springiness of the molecules is frustrating pretty much the whole time. Moving them takes so much longer than it really should. You have to click on it, then move your mouse to where it needs to go, then hold there for like 5 seconds until it stops bouncing around before you can let go and go grab another one. I think it's a really great effect and makes thematic sense with planets and gravity, etc., but I just think it's a little overdone. The planets repelling their building blocks makes it so hard to build the last 3-ish planets. It's doable with the first 6, but once you get 8-10 elements, it's difficult and tedious to build them.

Everything about this game was so clean. The UI all looks great, the gameplay was simple enough - just smash the ingredients together to create everything, the music is just relaxing and doesn't get in the way and fits the game, etc.

All the planets are pretty cute, but Saturn mew-mouse was my favourite.

Omg! Thank you! I agree with your comments. Some things looked easier for me but most players really struggle moving particles around. Text is indeed small, I wanted to resize it based on the cam distance, but you know, deadline makes you to do more important things. I wish I could do more. The Saturn 🪐 mouse 🐀 really cute, but was the most difficult to get it in the right shape. And I did the help cards just before the submission, and I think due to my english skill lack they just not good, or even terrible.

That being sad, again, just thanks! Your comment and feedback touched my hurt😭

The game is fun and cute. I do have to admit that with these types of waiting games I start using autoclickers to speed up the heating of the sun, especially because when you have a certain amount of meteors you simply have no radiation problem. So it does need a bit balacning.

It fits the theme perfectly. The audio is fine (bit low on my end). The gameplay is solid for what it is supposed to do. Art style is cute and fun, yet for some reason I wish the meteors were also cute.
Goodjob.

Good game overall! A little slow at first and sometimes frustrating with the molecules floating away as you try to collect them somewhere. Could use a bit of polish on how exactly the elements change when cast into the sun in  my opinion to make it less random. Fit the theme well and had good music!

Awesome idea, took a while for me to get the hang of it (my brain is too tired haha) but I love the art style and music. Great job!

Cool. It`s a good match of Arcade and Idle game.

Very good game. Art style is very nice. I'm not realy into clicker games but the orbiting stuff and heat management is good. A bit slow when we start maybe. By the way very good game. And pratchet what an inspiration.