Protect your spaceship by shooting the enemies with a grappling hook gun.
Submitted by Red01 — 7 hours, 52 minutes before the deadline
Add to collection 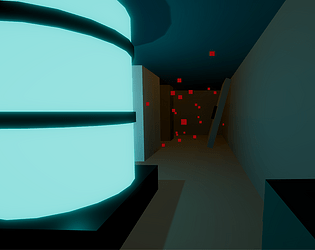 What INSPIRED this game?
I think space is really interesting, therefore I decided to have this game set in space.
I was also inspired by movies that take place in space, example Interstellar.

List the parts of your game you or your team did NOT make. (Pre-existing assets or downloaded content)
I took the powercore and the buzzing sound from this video:
https://www.youtube.com/watch?v=2Cux1beYVAE

The skybox image was taken from Solokeh posted in this article:
https://forum.unity.com/threads/space-skybox.99258/

I enjoyed, by best was 72000. Although i was floating away from the ship alot...

The overall atmosphere is cool, and the play on gravity with the grappling hook really sells the game. It feels a little easy to get lost in space though, maybe a "boost" ability with a long cool down could give players a chance at redemption and get a little more play time in.

Before I start: I will try to give you some advice on which parts of the game could be better, because I think, that this is why some people have joined the JimJam. I do not want to pull you down or something, I will just try to point out some things in detail, you could do better, so that you know where you might have some trouble. Even if I sound rough, I do not mean it so. Ok? Good! Now let's start!

Quite a good game. Asthetics are looking fine, sounds are also good and the grapling mechanic is awesome. But there are some things that could be improved:

At first: The tutorial. It is a box of text that no one realy want to read. Try to keep it shorter next time or in more visual form. I know, it is hard with such a short period of time to make something like this, but if you are without such a timelimit, keep it in mind. It was good for me, that the game was so easy to understand trough gameplay, because I just searched for the controls in the Tutorial and started the game.

At second: The options. It would be nice, to have some information about the value the slider is set in, like 50 is like 50% of the mouse sensitivity, so that the player can put his mouse sens that he uses in other games in. It also would be nice if you could change the senistivity in-game, like outside of the main menu, so that it is easier to test the setting out.

At third: The difficulty. This one is simple: static increasing difficulty. You could make it, that every wave has a greater amount of enemys, that the enemys are faster or smaller with every wave or a combination of these.

At fourth and last: The grapling mechanic. This mechanic is awesome, but it has one litte problem: hit detection. Sometimes, it  it just goes trough the enemy without any effect and sometimes it does not hit at all, but graples you towards the enemy. I think this is because the game uses ray casting to detect a hit, but count it as it not until the end of the shoot animation. So there are 2 ways to choose to improve this case: #1: make the hit detection through the hook itself, so that the player has maybe to shoot in the way of an enemy, which would slightly increase the difficulty of the mechanic, or #2: make the hook animation faster, so that it would not be noticed, that the game uses ray cast to detect the hit.

I like the game. It has a catchy mechanic and is easy to understand. My highscore was 176.000 and I lost because I catapulted myself up into space, so I could not defend my ship anymore. R.I.P. the dumb ones XD

I hope you have found my comment useful and I also hope I will see another game from you in the next JimJam.

Loaded fast, ran smooth, and quite playable. Unique concept too, with the grappling hook. Some glitches with the wall/grappling hook, like it would take me through the wall, but other than that, I had fun with this one, I think I scored like 11,000. Good job, so far one of the smoothest 3d entries I've played as of yet.

Oo, wow! This is so cool. I loke how those cubes attracted to the ship like a moth, totally ignoring flying dude with a grapling hook. My only wish - make some sort of "Rescue on theyr way to help you. ETA: XX:XX" and steady add number of cubes comming. That will add so much depth to this wonderfull and unique game! Love'n it!!!

The fact that the enemies looks like moths being attracted to a light never crossed my mind, but now I can't unsee it :)

I have been thinking of a way to add an objective to the game and I think adding a "Rescue on their way to help you", as you suggested,  would be perfect.

this hook mechanics feels so good!!! i think this mechanic in a 3d plataformer would be amazing

Using the hook mechanic in a platforming  game sounds awesome, I might just have to make one :)

This game raises a few questions for me.

Seriously fun mechanics here. grappling hooks are always a solid win in my book, but putting them in space really just elevated the grappling hook game for me. Using them to reel myself into enemies and smash them with my face is possibly the best use of a grappling hook science has discovered so far.

I can genuinely see this game play premise having some legs, if you wanted to pursue it. Spend a little time polishing the movement (like letting you release mid-grapple to change momentum without zipping straight into objects) and add some interesting level geometry (space derbies? Asteroid field?) and this game could be seriously swell.

Sidenote- loved the attention to detail of having gravity inside the ship. It's a small thing, but starting out with standard WASD controls it makes stepping out into space feel really exciting and new. Its clear a lot of thought was put into capturing that feeling.

Submitted
IT IS HERE
LikeReply
Red01Developer2 years ago

Thank you for this amazing comment! I'm glad to see that you enjoyed my game.

Your suggestion of letting the player release mid grapple is an amazing idea that I will make sure to implement if I continue working on this game. When designing the game i thought that switching between having gravity in the ship and not having gravity in space could be a cool idea, so it's really cool that liked that mechanic :)

Lastly I would like to add that "Using them to reel myself into enemies and smash them with my face is possibly the best use of a grappling hook science has discovered so far." is from now on probably going to be this games tagline as it made me laugh when reading it.

Love the concept of the game, i.e. zero gravity with hook-to-move. The tutorial is a big wall of text, which isn't very fun. A much easier to describe the objective of the game would have been to visually depict the enemies as monsters (simple ones), instead of cubes. At first, I thought the cubes are some sort of fuel or object I have to collect. I think it would be great if the concept is fleshed out more. Who doesn't love killing monsters while doing a zero gravity spacewalk! Sign me up!

Thank you for enjoying my game, the feedback is much appreciated. Fixing the tutorial and making the objective easier to understand will definitely be my first priority if I continue working on this game.

Making a simple enemy model was a great suggestion as I realized, from reading your comment, that it might not be very clear that they are enemies.

I also had a similar problem. Honestly, as a first fix, I would make the white blocks red. White is way too neutral of a color, so I thought they were platforms that I had to use to get across to another ship or something. And then when I saw the red particles, I thought those were the enemies. Just make them all red, and it'll be pretty clear that they're the enemies.