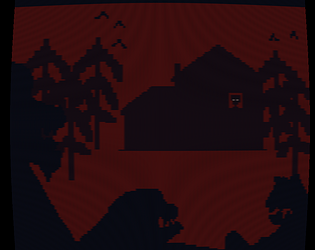 Really awesome entry, the audio and visual style are really creepy and the jumpscares hit hard.
I think the only major issue with this game is that it needs some explanation (that or I /do/ understand it and it's just too hard) - because I feel like I was checking the windows and turning off the lights when the door opened and keeping myself sane and I just kept on ding dang dyin'. At a point, it stopped being scary because I knew my death was guaranteed LOL
Overall, though, great work!

Loved the atmosphere you created with the visual style and audio. I think I needed a bit more instruction on how to play the game because it took a lot of trial and error to figure things out! A simple splash screen that explained the mechanics would be really helpful. Overall though nice effort - I think with a bit more polish on the gameplay you would have something awesome here!

Thank you so much for your comment you are definitely right I wish I made a tutorial or at least a splash screen for the mechanics.

Holy crap that was scary. Loved how immersive this was. I think the lighting could've been a little better - Even though it was intentionally dark, it was hard to see anything other than the scare!

Well this uh.. definitely confirms that Horror games are not for me.  It really got me with the jump scares for sure, I was not expecting that much.  But uh, overall it's a pretty well put together complete game.

Though I do have to say this is also speaking from someone with no experience in horror games that the controls felt a little weird.  I was having to move to this specific place for the "eyes" guy to click the switch, while I was just having to hit space for the "window" guy.  And then I never really got to see the closet guy.

Mostly cause I died to moving between the two others, or to the weird sanity drop when my flashlight ran out of battery... To be more specific tho:

Overall though, speaking as someone who has not played a horror game, and probably won't after this.  It's scary and it's definitely interesting, but mostly scary.

I like the retro style. You definitely nailed the atmosphere.

The first time the monster jumped out I almost had a heart attack! I can’t say I really mastered the game and only lasted a few minutes, before the screaming monster grated on me a bit.

I think with a bit of a tutorial and some fleshing out it would be a great game.

thank you! you are really right about tutorial. game needs some really good tutorial.

Nice one! I will play it more, so far I always got attacked by the monster coming from the window, but I did get the chills when playing it! Nice atmosphere and interesting game!

Hi codsythedumb, I'm a big baby, so when I saw the "play with headphones" I was like: "oh boy... here we go." But I did like the art style and the creepyness of the eyes. I like the light management, there's a lot to balance. I liked the sound effects, that brought in an extra layer of fear. I jumped, was scared. Good job.

haha xD thank you so much for your comment