You kill with only one blow, you die in one hit, you die if you miss once.
Submitted by alvarorg — 3 hours, 21 minutes before the deadline
Add to collection 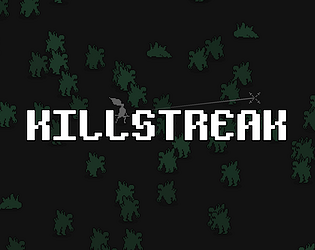 The simplistic graphics look so great, I can't explain how much a dig this style. Very easy to tell the player from all of the enemies. That was a lot of enemies when the game started. WOW. The dialogue was great, don't really like how it repeats every time you restart but either than that it was great. Killing enemies feels great too, love the sounds. Game overall is great, great job.

Really liked the game! The idea is totally on point with the theme and its execution makes it simple to play but really enjoyable to retry.

I know this is a jam game of course and I think the game is really good as it is but if the developer wants to make a post-jam version I will like to leave a list of things that come to my mind to (maybe) improve the game:

Thanks for making it, hope to see more games from you!

Hi, thanks for the feedback ;)

I was planning on doing the "push away" thing in the post jam version, but I will have to be careful because it might be exploitable (the player can just click fast and as long as he doesn't misses, he won't die. Maybe that's fine though). I also wanted to do something when the player slashes multiple enemies at once, and having a score multiplier seems like a good idea actually. I will also try to make dead enemies stand out less (or more?) and see how it works out.

Anyways thanks again, see you around!

I saw the temporally slow down of time , think this concept could be expanded abit more so that the more monster you kill in one strike ,you get longer time of "zen" mode where time slow down to aim for another multi-hit ( and it help eliminate the sudden death where before you are able to make nxt strike , a monster creeps up to you or even spawn right beside you)

I thought about slowing the time depending on the number of enemies hit, yea. Maybe I'll add it to the post jam version (if I end up doing it). And about the "sudden death", that could be solved pushing away enemies that are close to the character when attacks (but not close enough to die).

Also there is something that people seems to not be aware of (because it is not explained, my fault). You can actually move using WASD.

XD tried to move with wasd, definated helped abit , but somehow it get bit distracting and caused a few unwanted death at times(bump into monster etc.

Btw , as I was replaying with moving the charater, the slow down time can be shown as you cutting of the monsters one by one(so the more you kill the longer the animation will be thus more time to plan on next strike.) You will still be able to move your mouse or even click on the very next location while the animation is playing!

Yea, Katana Zero style. That also crossed my mind but I discarded it because there are just too many enemies, it will last too much. But maybe I can give it a try.

Hi, thanks for the comments.

I agree that the game is probably too hard. I didn't have anyone to playtest the game at the time so it ended up getting balanced for me, which probably wasn't a good idea because I played it more than the average player will do.  I wanted to make the game hard enough so people should struggle to get a 100 killstreak, but be able to do it. I managed to get a 150 killstreak.

Also, I agree dead bodies make it hard to distinguish enemies. I tried to fix it by varying the color of the enemies slightly, but wasn't enough. I thought of adding different kinds of enemies too, but I didn't have time to do it.

"Also please add a highscore server or something! I'd love to compete against friends in a game like this. ". I really wanted to do this but again, I didn't have time to do it. I might do it for a post jam version.

And yea, the death sound and the repeating text is a bit annoying. Sorry.

Anyways, thanks for the feedback!

Nothing to be sorry for mate! You made a really nice, promising game in a really short amount of time!

If you do end up working on it post-jam, I'd love to see what you can come up with and where you can take this project. I'll be keeping an eye out on your game page for any new updates!

I really like the hit-box of the slash and how the game slows down as you perform it, but it certainly isn't without issues.

Dead bodies make it quite confusing as they are not easily distinguishable from the living enemies and don't disappear.

Also there is just too many enemies to keep the game from being stressful. Maybe if you replaced some of them with a different kind (that could only slowly go towards you, but would shoot a bullet?) and reduced the overall number.

Loved it! A really challenging game that keeps you on your toes. You can't rest for a moment because enemies are swarming in from all corners! It reminds me of OSU in the way that you have to take in information at a very fast rate while reacting with very precise mouse movements. I saw it on the GMTK stream and was determined to do better than him. My highscore is 92 so far, but I'm sure I can do better than that.

The thing that kills me the most is if I'm on a good run, the screen is so full of dead bodies that it's hard to see which enemies are still alive and which are dead. But that also adds to the challenge at the same time, because I need to detect movement better, so it's not a criticism per se.

One thing I would like to see different is that after you die to not have to reset to the main menu, but to just have a 1-click respawn. Since you die pretty quick and often, it becomes tedious to sit through those 3 screens every time. I definitely don't think the design was bad or anything though. In my opinion it's geared towards a specific fast play style and while things could be added to make it a bit more forgiving, I personally enjoy the hardcore nature of it.

Also please add a highscore server or something! I'd love to compete against friends in a game like this. I think it has a very competitive nature to it and I'd love to score off against other people.

Hahaha, don't you dare xD. I haven't been able to best it yet, but I'm definitely trying!

I liked the idea, but the design was bad.

2. So many enemies that you can't focus.

3. Even if you try to avoid corners (so that newly spawned enemies don't kill you), you still die very fast.

Finally the death animation and sound gets annoying really fast too.

This was one of my favorite games in the jam! Simple concept, but very polished, juicy and original. Great work!

Submitted
I am Bullet
LikeReply
Maxi MessinaSubmitted2 years ago(+2)

The game has a hard difficult and huge quantity of enemies. Promising. Simple and beautiful art. I like it!