a game in which you only see one information at a time
Submitted by RomainDnnn, UndyingMoon, mvthilde (@mmvthilde) — 1 hour, 12 minutes before the deadline
Add to collection 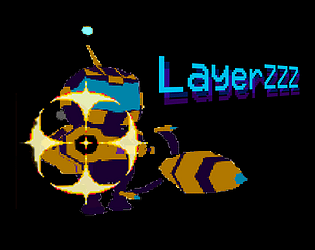 Interesting idea. I included it in my GMTK Game Jam 2019 compilation video series, if you’d like to take a look. :)

There are some bugs in windows build, but it's still pretty interesting to play switching views.  Though, maybe it would be better to have ability to switch views in both directions.

Submitted
One color. One direction. One button. One life.
LikeReply
mvthildeDeveloper1 year ago

Yeah we need to work on the switching process!

Thank you very much for your feedback !

And I killed the boss through a wall :)

But it is pretty playable already.

Ok, I'll played the game. And the comment of @Aerow resume perfectly what I think.

I can understand your choices to respect the game jam theme. But the theme should be used in a positiv, funny, constructiv way. The theme is here to help you to think differently, create something original. Not disabled the player.

Don't take it negatively please. Just trying to be honest and to help you ;) Hope you understand !
The negativ, but constructiv comments are the best to improve yourself and your games.

Hi! You’re allowed not to like our game, that’s totally fine with us :)

I think it boils down to what you expect from a game jam. There’s no « should ». We take it as a space of experimentation and we did experiment. We are video game developers and we do game jams to test out ideas, to try something different. We took a radical idea and iterated on it. Sometimes it works, sometimes it doesn’t! (but I’m actually proud of the work we provided in 48 hours).

Our goal was not to disable the player but to see where this layers mechanic could take us. We’re very aware of all the things that need fixing but, hey, we tried :)

Interesting game. The idea of being in one layer at a time is really cool !

However, there are stuff that you can improve for instance music was a bit loud and repetitive (I played on windows). The UI and game need polish overall but that's more a Jam issue with only 48 hours.

Switching layers with only the tab button can be a bit annoying. I understand this choice but I think putting the enemies layer just after the environment layer is a bit more logical since you are moving in the environment then you get hit and you can see directly what's attacking you by pressing tab once. In your game you have to go through all the layers to see the monster which can be a bit irritating.

I also think the pause layer is quite useless and getting rid of it wouldn't harm your game in my opinion. Imagine being a player and you need to pause the game quickly to do something else. In your game you have to go through the layers and stuff it can be annoying for the player. I think pausing the game should be a feature always accessible.

Finally the game is quite hard to understand at first. At the beginning, you are lost in all those layers without knowing what to do. For your future games try to make some kind of tutorial inside the game which shows and introduces the game mechanics one by one at the player.

I also saw some bugs like enemies being visible in environment layer or if you start the game and don't press tab at all you can see both the enemies and environment.

Thanks for all this feedback!

You're right there are a lot of design flaws and bugs. We were too ambitious for this jam :)

I actually wanted to turn the start room into a tutorial, with static ennemies and maybe a switch to open the door but we lacked timed and it turned out to just be the "press tab" UI text.

But glad you like the concept! I hope we'll find time to make it interesting :)

Thank you for your feedback !

We did think about the layers order, but way too late, and didn't have time to really think about it. That's definitely something we want to improve !
Thanks for your advice on the pause layer, we'll think about it. We'll work on the tutorial part as well, we're still newbies for the most part ahah, we still have a lot to learn.

I'm glad you liked our idea though :)

Your idea is very cool and original but I think it requires some tuning.

In my opinion the biggest dealbreaker is switching layers because is a little frustrating sinche they are in a certain order. I'd prefer to  have a single button for each layer so I can decide which one is active and do it faster.

Visually is a little grainy and  the UI is also reaaally big and invasive (but that's an easy fix).

I also kinda struggled with the inputs because I'm left handed (but that's my problem, ahahaha)

I think that polishing art and UI will be a great upgrade! Keep developing this, it is really original!

Submitted
Only One Maki
LikeReply
mvthildeDeveloper1 year ago (1 edit)

Thank you for your comment !
also thank you for your idea of the single button for each layer, we might try it ! although it was part of our idea to only have one button to switch from a layer to an other to create a new  challenge. We're probably going to test several options for this layer switching thingy.

We've already talked aout polishing all of the visual aspect and the UI. We were short on time for all of these little things, but we're definitely going to polish it. We're stil at our firsts game Jams ! ( second for me, first for Itchig0 and a bit more for Romain ), we still have a lot to learn, so thanks a lot for your feedback, it'll be useful :)

I know time is a real tyrant, you did a nice job anyway.

Thanks for your feedback! It's nice to take time to do that.

We wanted to put the challenge around finding the good layer in a moment of stress indeed, but maybe we could have tested other solutions. Sorry it was hard for you to play because of the controls mapping, developers never think of left handed players it's a shame.

Glad you liked the idea anyway!

Don't worry about the mapping problem, it's totally fine ^_^ all the more this is a prototype, you had no time to think about accessibility at this stage of delevopment.

I found the music very grainy and far too loud. A mute option would have been really nice. The 'press Tab' words were stretching over the screen, I wasn't sure if it was intentionally or not. I really didn't find it easy to understand what to do.

Thanks for your comment. The music is indeed completely broken on the WebGL build,  which is an old one, itch.io didn't update it I don't know why. I uploaded a windows and a mac build.