A platforming game with only one platform.
Submitted by zchip — 17 hours, 47 minutes before the deadline
Add to collection 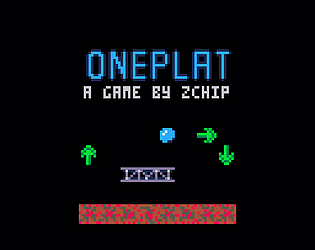 It's a nice use of the theme and the control mechanic over the platform is kinda clever to. It took me couple tries to realize that the green arrow (in the second level) controls the platform and also the use of this control scheme makes me nearly to give up on the 5th level. The progression of the difficulty is pretty tight here ;D

Well, nevertheless i had fun.. except the 5 th level (maybe if you would use the idea later on, when the player has gained more skill, it would be "better)
Well done! :)

Had some good fun with that one! :) Love how later levels require you to get creative, experiment and demand a lot of skilled execution (like timing the double jump correctly). My only complaint would be, that it took me quite a few tries in level 2 until I realized that you have to jump over the arrow to move the platform. Initially thought it would be just a directional marking on the wall. On replaying the game I noticed the level description beforehand, that's probably supposed to make you curious about that. So in the end it might be just about me being too lazy to read, but still: move the arrow a little bit more to the right, so you can hardly miss it when you decide to go for the goal and everyone will be happy! :)

Thanks for the suggestion!

Submitted
BOB DOES NOT CARE
LikeReply
Mark ViolaSubmitted1 year ago

I couldn't beat that level with like 15-20 arrows, but had a lot of fun playing it, nice work!

Submitted
Roll With It!
LikeReply
AndrewSubmitted1 year ago

Loved it! The oldschool graphics and sounds are so dope :)

This game is the best kind of frustrating to play. Very well done!

Verry fun idea with an exelent execution! the dubble jump is so fun to use!