BOB DOES NOT CAREView game page

Only one life. Weapons can be used only once. But BOB DOES NOT CARE
Submitted by Filippo (@notfilippo), Mark Miso (@markmiso_) — 11 hours, 12 minutes before the deadline
Add to collection 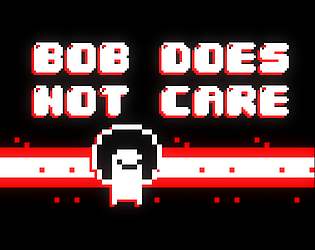 BOB DOES NOT CARE's itch.io page

Ranked from 188 ratings. Score is adjusted from raw score by the median number of ratings per game in the jam.

the mechanic is good,fun to play

This definitely reminded me of Hotline Miami. I spent a bunch of time trying to perfect my route. I had a lot of fun with this. Nice work! I can't wait to see what this turns into.

If you have time please play and rate my game:

I got stuck trying to beat level 3 and couldn't get back in time to rate it! D: Great work!

Very difficult but also very fun to play. I love the music and sounds. The artstyle, animations, explosions are super cool!

Submitted
Lazy Driver
LikeReply
Hey it's me, AndreSubmitted2 years ago(+1)

Love the aesthetics and the feel! My one note in terms of arsenal, melee weapons feel severely underpowered compared to their ranged counterparts.

Smooth controls and camera. Great use of VFX

Submitted
The only NeOne
LikeReply
FilippoDeveloper2 years ago(+1)

One of our goals for the post-jam release is to balance current weapons and add new ones. Melee weapons will be definitely be upgraded

It seems like it has been said in other comments but I was basically getting shot from off screen by enemies that fire before I can see them, which grew tiring. I tried with keyboard and controller (props for adding controller support!) and couldn't get very far into Level 2 before getting frustrated

I'd also sometimes get unlucky with powerups (run into 2 enemies and the powerup you pick up is a single target one). It would be nice if you could bias toward placing AoE weapons near groups of enemies maybe?

I'd be excited to come back to play this more in the future if you make some tweaks!

Really loved the art style and the sound, one of the best i played in this Jam so far.

This has great game feel.  I'd really like to play it without the 1 life limit.  It's a good way to express the theme, but man it makes for a steep difficulty curve.  Great action moments and lots of tension though!

It's quite addictive and very juicy, but the fact that the roll doesn't make you invisible is quite counterintuitive and i died a lot before realising that it wasn't a dodge. I also think that the enemies should telegraph their attacks, even if it's just for a split second. I experienced some frustating moments where I was being chased, rolled past an enemy in front of me an immediately died because the same enemy shot me without warning or time to react. Other than that, it's quite fun and really sticks to the theme in my opinion

It's definitely not a bug that slipped through the play tasting phase ;)