The Floor Is LavaView game page

A Platformer With No Up Or Down
Submitted by StagGames — 3 hours, 11 minutes before the deadline
Add to collection 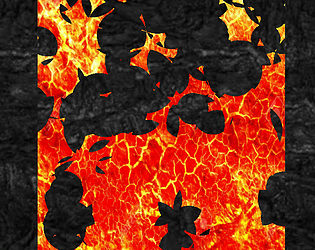 The Floor Is Lava's itch.io page

Great concept, very creative.  Not sure if this would qualify as a platformer though.  Game works solidly, good job!

It definitely got a bit more interesting part the first few levels where it became a puzzle of trying to plan out a potential path from start to finish, and although the rocks move in an unusual way I didn't find it too unpredictable to not be able to get out of sticky situations.

This is a very interesting game. But just as everyone said it can get a bit repetitive after a few levels. Adding one or two mechanics that compliment that main mechanics would keep the game engaging. For instant, other lethal hazard like rolling rocks or meteor could increase the depth of the game.

The musics is very intense. However the Wilhelm scream when you die, while funny, it is a bit out of place.

Overall, it is a very nice game. And well done making it in 48 hours.

I imagine this game can be very enjoyable on mobile phones too. Maybe you can consider porting it to the mobile platform as the simple controls allows it to be played easily on phones.

very good game with new unique mechanic i loved it too much just with new pickups or you know what i mean things to make it more interesting and keep player engaged and this game will become perfect.

you can go checkout my entry and rate it it will be very nice to leave a feedback.

The music's good. I also agree that right now it's a bit repetitive.

I think the game as it is now may be a bit restricting in regard to adding new mechanics. Since you're the mouse pointer it would most likely be unintuitive/annoying to have level elements move your character. And right now it looks like it's randomly genrated levels? (of course there's already code to set the difficulty and maybe to make sure it's completable.) I think it's harder to add more mechanics when a game is basically completely generated randomly because you have to account for the randomness.

Submitted
Box in a Box
LikeReply
drewbySubmitted4 years ago

I like the music a lot. Very intense and sets the scene.  Also, I'm sure the code to generate those moving lava platforms was really satisfying to write and see working!

I agree with some of the other people here, that it gets a bit repetitive, But I mean, this game jam is short, so I understand. And if you have more time to work on it, you should come up with a few more mechanics for levels!

This lags pretty hard on my machine. The mouse position and the player token position were desynced if i moved the mouse too fast. Unless that was intentional.

No, that lag is not meant to be there,

I don't have any idea of other mechanics to add, do you have any thoughts?

That's a cool concept, and the music is so epic! I would have liked to see some more ideas implemented, as all the levels played pretty much exactly the same. Also, some of the levels were quite easy because when it started there was a fully complete path the you could run your mouse across. Still, its a cool idea with a unique theme. Nice job!

I was not sure what else I could add as new mechanics. Most of all without disturbing the graphical style.

Really cool! I love the feeling of getting a sense for the level and where things are gonna go

It's fun to play and very easy to get started.

As soon as I hit Play the game freezes and crashes.

Hi, thanks for downloading sorry for the problems.
What system are you using? And have you unzipped the folder?

I use Windows, I unzipped the file and all of it's contents into the same folder, so the exe and the associated _data folder are in the same directory along with the other files like the Unity Crash Handler (which is funny because it's crashing)

I have no answer to that.

yeah I don't know either, it doesn't really give any error message or log for any info. Sorry I can't help, hopefully whatever it is doesn't cause too many people to be unable to play, good luck on the ratings.

It works well for me. Do you have other stuff open?

No, I do not. Either way that shouldn't cause any problems. If you somehow make a game that crashes before of other programs being open with an engine like Unity then you'd practically have to be trying to do so intentionally. My computer isn't exactly new, it could be anything from a shader issue to something else in the game simply not liking my system. I'm glad it works for someone though.

If it could be a shader issue it is. The game uses shaders very heavily.

Alright I tried running it again a few times and a couple times I was able to play for long enough to get past the first level, one time got past the second. So it's inconsistent when it crashes for me. Either way I was able to see the concept so I think I can rate it now.