A shooter without shooting
Submitted by DrunkRaccoon — 8 hours, 46 minutes before the deadline
Add to collection 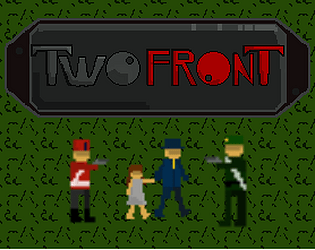 This was a surprisingly deep and dark experience, conveying the idea pretty well. I felt trapped, vulnerable, helpless, not being able to call for help. Especially in later stages, it felt pretty weird to run the battlefield full of people, yet the only sound being  heard was the barrage.

Interesting idea well executed ! The graphics and sound are good enough. I liked how removing the shooting mechanism transform an action game in a game more focus on the ambiance ! There are also some very nice details like the number of weapons that the army use or the fact that you can continue to see the battle even if you die. It add to the immersion.

In the negative points, I would say that you can too easily survive if you just run in circle so I thinks that it needs a much higher difficulty/others mechanisms that force the player to have a more various behavior.

Very fun idea and I did enjoy playing.

I found it quite hard to actually get two opponents to hit each other so I ended up running around aimlessly and hoping for the best.

I think if you added a sprint, cover, explosive barrels  and had enemies able to fire at angles the player would have more control about which enemy to kill off. But just a suggestion.

The art work is nice and I liked the increase in difficulty.

Submitted
Zombie Survival Shooter but with no shooting of zombies in order to survive.
LikeReply
meatghostSubmitted2 years ago

Always risky when you don't give your player very much to actually do.  This pulls it off though.  Kind of feels like running around in that old xmen arcade game but trying to get everyone to kill each other rather than attacking them yourself.  I like it.

A very intersting Idea!  Reminds me of "This War of Mine" if it was a arcade style arena shooter, (or would it be a shootn't?)  I like the art somewhat.  The characters look good, but not so much the environments, though it all looks kinda blurry.  I like using enemy infighting as a way of combat, I just wish it happened more often.  The soldiers seem to spend most of their time walking around instead of shooting or throwing grenades.  It's hard to get soldiers to shoot each other when they can only shoot in two directions as opposed to 360 or at least 8.  The game feels a little bit too easy  because of the lack of actual fighting happening but I imagine it gets harder much later down the line.

All in all I think this is a good concept with some potential, just needs to be more engaging and challenging. 3/5

(Also, protip from one GMS user to another, if you want your pixel art to look less blurry go into the preferences for your game (the button that has three bars and a rectangle on it of some sort), go to window then untick the box that says "interpolate colors between pixels".  This will make your game much sharper pixels and it will look better as a result. )