Zombie Survival Shooter but with no shooting of zombies in order to survive.View game page

Submitted by StagGames — 1 hour, 40 minutes before the deadline
Add to collection 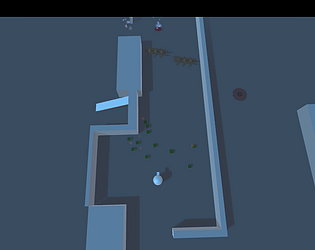 Zombie Survival Shooter but with no shooting of zombies in order to survive.'s itch.io page

A bit hard to see what items are/do on the playscreen. Bigger icons and more feedback of the actions would be great. Tennis ball is almost invisible after thrown.

Good idea with the mechanic. Collecting items along a simple labyrinth and using them can be its own puzzle, especially if the zombies are deterministic.

The player is a bit slow, but I liked the idea. The items were also a fun idea

Thank you for playing, You are right I wanted to add a sprint but that made some problems so I left it out. I should have put the speed up.

Good idea, but the execution could use some work.

Your player is too slow, there aren't enough zombies to make you feel like you're ever getting overwhelmed, you still kill zombies, just with bombs instead of guns to name a few.

The concept has potential, but still has a ways to go to live up to its potential (fair enough since you only had 48 hours).

Thank you for playing. Giving the player ladders would be great!!! Good call, but it may have been a bit hard to get it to snap to the wall correctly.