An action RPG in the style of the Game Boy.
Submitted by helpcomputer0 (@helpcomputer0), Kanoa (@shakekonigiri) — 2 hours, 10 minutes before the deadline
Add to collection 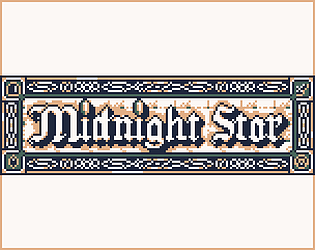 I should have checked this game out sooner, it's SO good!! Like, seriously, this is awesome, and it's SO accurate to the GB!
It didn't just stick to the colour and resolution limitations, you went full-on with respecting the system's specs, no extra layers that the system didn't originally have, the sprite colour count is correct, the palettes stay consistent with only 4 colours, and even the mid-game changes in the palettes could have been done on Super Game Boy (though I'm curious as to how you'd have planned on achieving a day-night cycle on the original GB), and you even paid attention to less noticeable details like dialogue boxes being fully opaque and covering up the entire horizontal resolution, this is perfect! Even the movement is tile-based, though you might have gone a step too far with that in locking the sprites onto the 8x8 grid, you know, GB sprites can move freely, but this is no less accurate! (Though it reminds me a lot of old Japanese PC action RPGs like Ys for example, though since this is flip-screen it reminds me more of MSX games...)

The one aspect of your game that isn't totally accurate though is the sound and music, it sounds more like a PC engine than a Game Boy, that's the one thing that keeps me from giving you the full 5 stars on Gameboy-ness... You still get the full 5 on Fun though! Good job!

It was fun!  would love to see a more 'fleshed out' version in the future

I like that switching color palette a lot.
Something I'm sure of is that you master dithering, haha. :-D

Ok! This is final review! As I expected, it's great! It easy to lose focus of everything else and play the game till the end, which is what I did! Every point deserves a 5 stars.

The game is really easy (i barely did a no hit run)  but it's still fun, Graphics are cool, musics too.  Sadly, there is no different type of ennemies, no different patterns but the boss design and the way they are used to learn how to defeat properly the final boss is really smart

Thanks for the feedback! Yea it is quite easy, I spent my last few hours implementing other features rather than more testing, so I leaned toward making it easier rather than too hard. The enemies do have different behaviours/strengths but they're not very noticeable as I didn't want to break anything!

This was the only I had to make sure to play it! After playing about 50 games, I missed your game and had to go to twitter to check out the link. I'm finally year, and enjoying it! But, unfortunately, I'm having an issue with the window. It's not focusing, which is making really hard to play it! Aside from that, so far so good!

Thanks for the feedback! Are you using arrow keys to move? I think the issue might be using arrow keys which is moving the window up/down, but this is a Construct 3 issue, not sure what's going on. If you can use WASD that should be fine and I'll investigate...

Oh ok! I didn't even try to use WSAD. Thanks!

I really like the flow of the game. It looks like a mix between a turn-based mechanic and realtime one. I was wondering if you would allow me to, possibly, use a similar system in, possible future game?

Of course, it's not my design! It was influenced by Super Hydlide.

I just check it out on YT. You really managed to make it work and look the same way, really good!

I fixed this now,  arrow/space keys won't scroll the window.

I like so much the enviroment with the enemies, UI System, Boss and othes.

To me the game feel lack something, but it's the game design, not a error. The enemies is so static, and I can pass withou fight, unless the enemy blocked me haha.

Ah, if the player died, I recommend to reset to last point, because make again it's so exhausting.

Fun game, very nice!  Be sure to check mine out as well!

The best thing for me was the music, very awesome!

A lovely little adventure. The swapping color palette for the day and night cycle is quite unique! It seems the final boss is unable to teleport if you stab him quick enough, hehehe