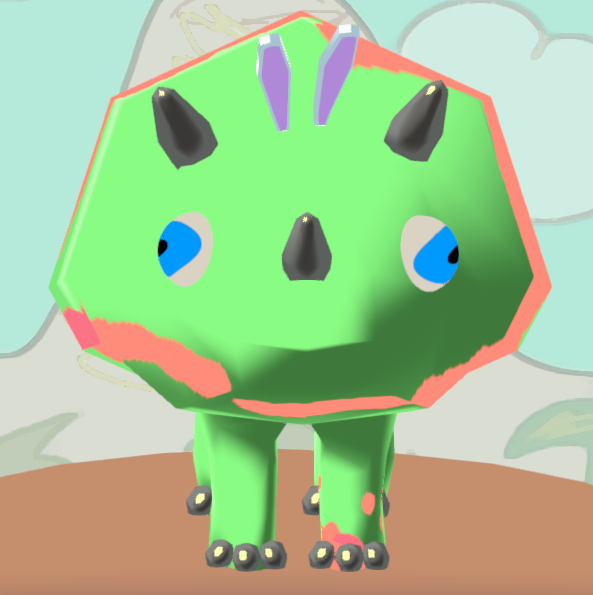 The fact you can unlock different dino skin is really cool! ^^

I was very bad at it at first, but once I understood how it works it was okay. Your voice acting is with no doubt really cool and that cute little story makes it a really cute fun short game. Well done! ^^ 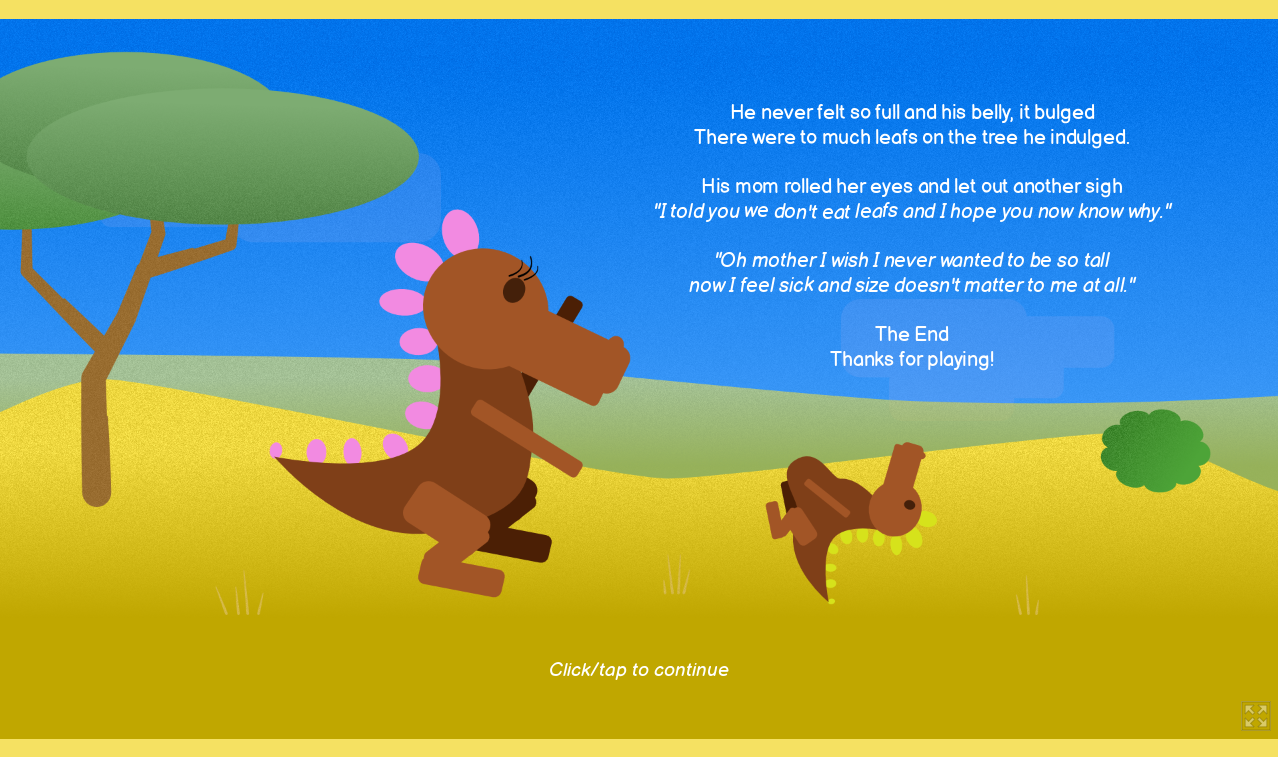 Really fun concept! A dino in a grossery store.. OMG I never think it would be that hard to do shopping for a dino.. I barely lost looots of money x) 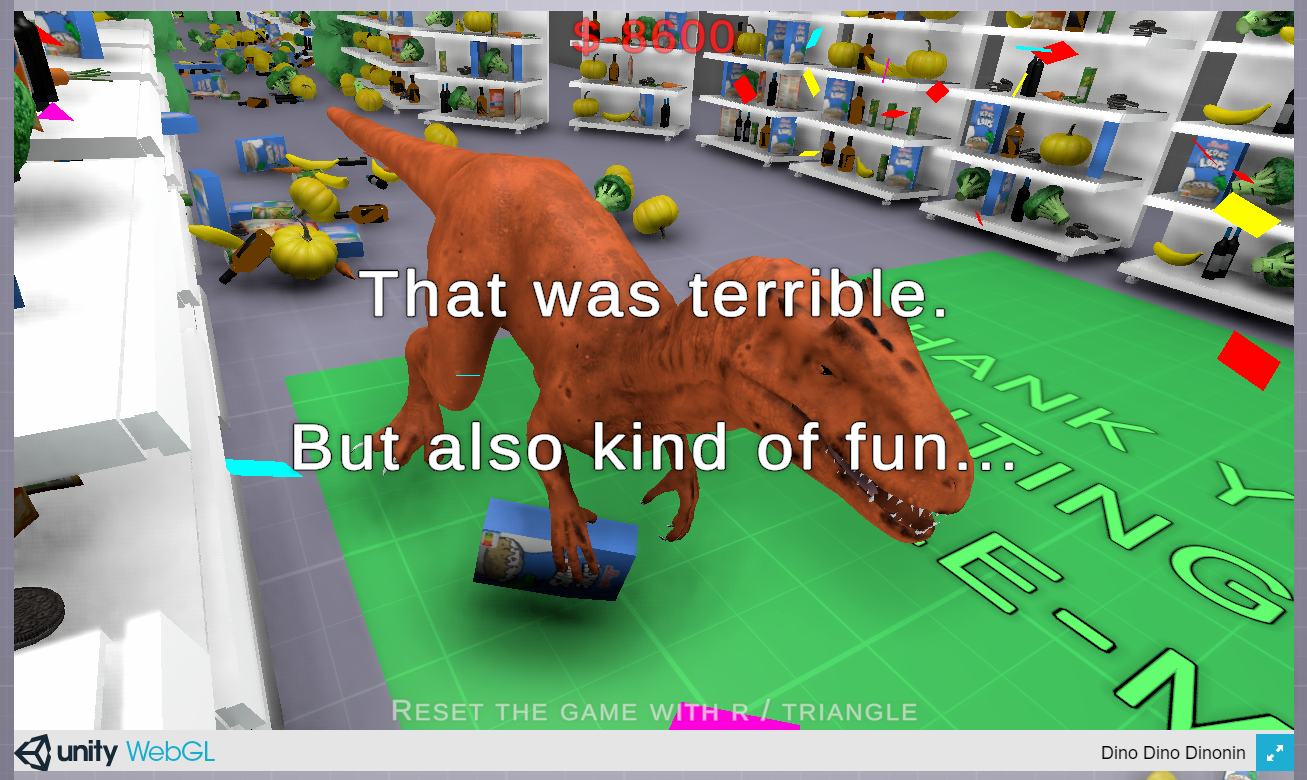 Not really sure what I had to do, but I do love this cute little guy ^^

I enjoyed jumping on all enemies. This game could be very fun with a little more polish. The good old days of PS1.. :D

The DINOJAM1 jam is only open to entries that follow at least the main theme about "dinosaurs". Your game doesn't look to use this main criteria - unless I skipped something - so I'm afraid I'll need to remove your submission from the jam.

Please have a deep look at our jam rules before submitting next time.
Jam link: https://itch.io/jam/dinojam1

Awesome tiny game! Very nice art! I really had a blast playing it :) 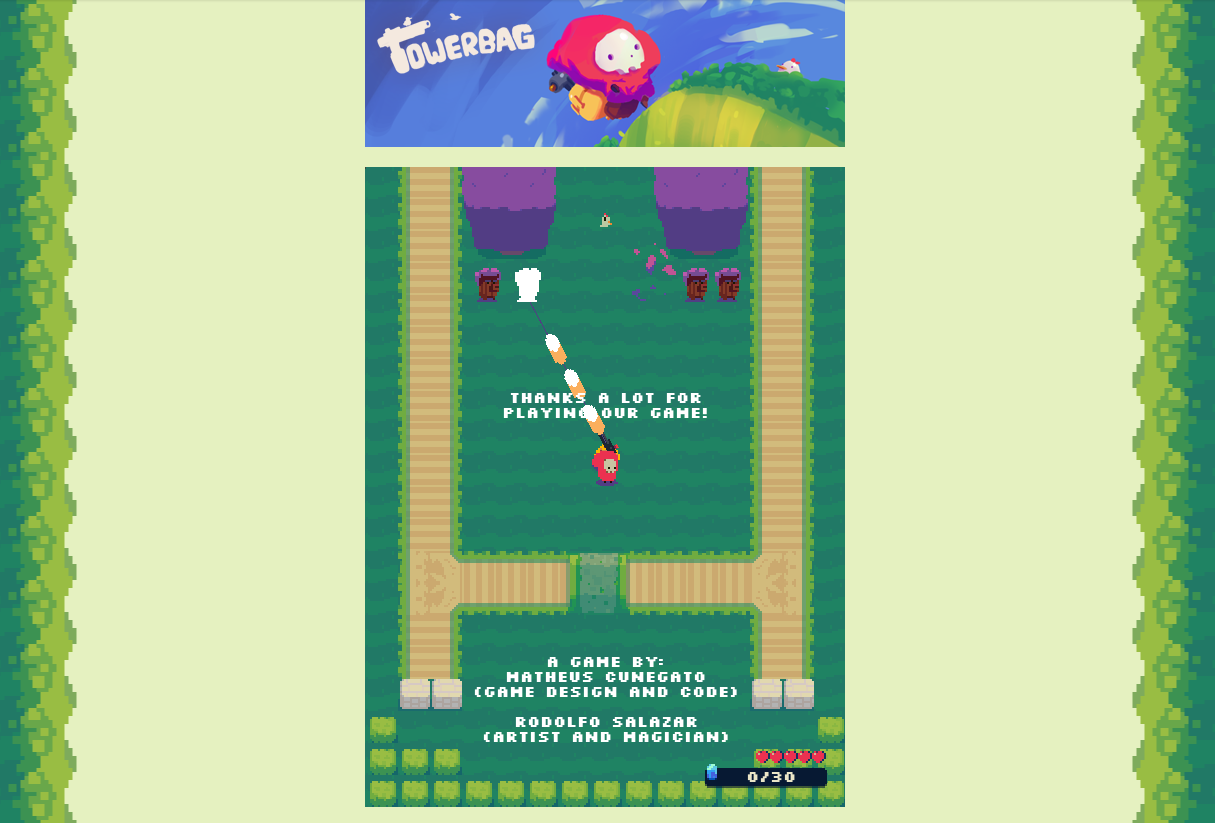 Use this topic to share ideas or request features, please.

Use this topic to report bugs or issues found, please.

I'm not very good at this kind of the game but it is awesome and really fun! Well done, guys! :D

Yes, it's a tribute to "Nabbit" from Mario games

Thank you for playing, and glad you liked it! :-)

Thank you for playing and thank you also for the video! It is very much appreciated! Glad you enjoyed the game <3

You're right! I also had lots of troubles in level 3.. I don't know why I didn't put it later but that's a very good idea indeed 👍 I'll probably add this change and some other cool SFX once the jam ends. Thank you very much for playing and for your feedback ☺️

I'll make sure to find a good way to tell players what crates do once the jam ends. In the meantime thank you very much for playing and for your feedback! 🥰

I do understand what you mean regarding the time theme. Due to time I had left, I did some choices and wanted to take as less risks as possible. I have some plans to make it a full game later, so I might polish time crates mechanic a bit more and probably add some more levels, content, story, and enemy to give more context. Thank you for playing and for your feedback!

Thank you for playing, for your feedback, and for sharing your score! That's very much appreciated!

I read you, and understand. Thing is I wanted to add one more mechanic based around time to make it more relevant to the theme. Like a timer that would spam some sort of police cops that will try to catch you until you escape the level. It was already one week left for the jam, and I had that prototype working already so I had to make a decision and I took the easiest one as to not implement a new mechanic. I didn't want to take that risk and fail to upload this project. That said, I also wanted to polish more animations and stuff around time crates, but again due to the tiny amount of time I had left, I had to make some sort of decisions to focus on what I thought was the most important: levels, main mechanic, polish controls + main mechanics, a start screen, and an end screen. I don't want to argue as I do understand and agree with what you say, I just wanted to explain my choices and how it went. That said thank you very much again! ^^

I don't know why but this 2nd character crying (won't say much - don't want to spoil to others) really scared me out, lol. But hopefully things were fine or almost, haha.

Really original entry you made there! Short, but okay with time we got for the jam. Really cool!

I'm not really good at these kind of die & try platformer, but that's just me.. Haha :P

Really awesome art, audio and polished animations! Controls are perfect to, very smooth. The stop time mechanic works perfectly. I had a blast when I saw squirrels can suicide themselves, lol

Took me a while to understand how to play (like 5 minutes :s) but once you did it was a lot of fun. Very nice puzzles that can be hard sometimes to solve. Challenging. Awesome art and chill music. Well done!

Seriously.. I had so much fun and lots of positive surprises while playing the game. Very creative! Very fun! I dig that game narrative humor, haha. It was short, but with some high quality content! Good job, guys! Awesome surprise!

No worries! That sounds awesome. Keep up! :-)

Ofcourse I did! One of the most important feature, haha :D

Seriously? You filled my heart with sooo much love :3
Everything about this short game was awesome! Music, gameplay, art and story! You guys are very talented <3 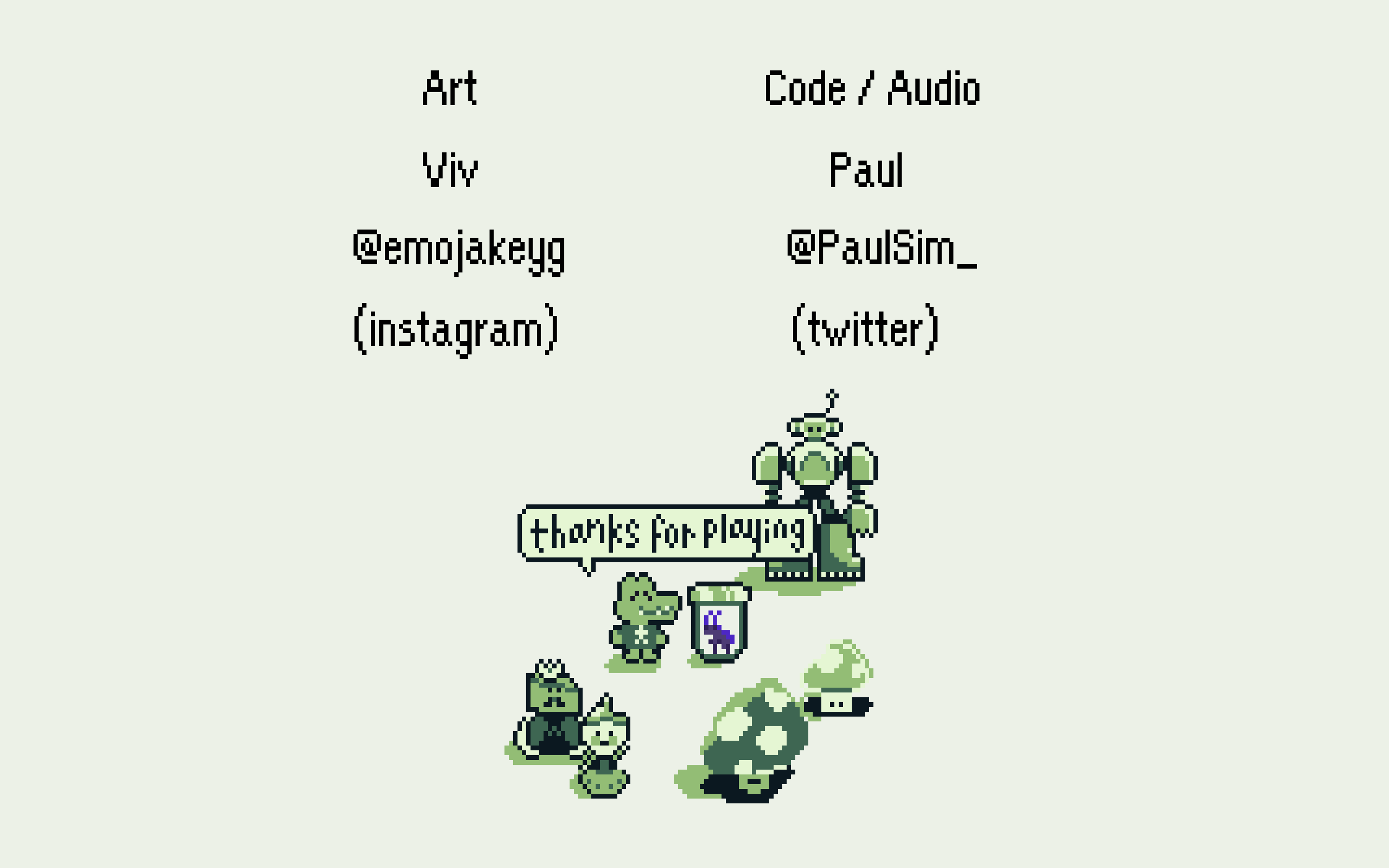 All those lovely little big details are doing it all. Really cute and refreshing entry!
I felt the cuteness even more while I saw these two lovely snails doing a run vertical on the electric pole. :D

As others mentioned I also died a few times on the first scene and reading back the entire dialog was a bit boring.. Anyhow this is a really cool little game! The story kept me playing! It talks to me as I were severely injured 4 years ago and spent 3 months at the hospital. When I woke up I forgot a lot of things but hopefully memories came back days after days. So yeah I personally got into the story and quite enjoyed it!

Really great pixel art and animations too - which wasn't necessarily what I expected seeing the thumbnail at first. You should probably showcase more your art on the page to attract players because your game deserves some attention.

That said thank you very much for this cool entry! ^^

Thank you! Yes, Mickael (the composer) did a really great job! My briefing was as stupid as "I'd like a music that makes you feel happy and chill while stealing some carrots" and he came with this.. Haha ^^

Thank you very much for playing, and your kind words!  ✨

This comparison is an honor ☺️
Thank you for playing!

After adding a few more levels and some polishment, I might release it later on mobile. I didn't think about the swipe down gesture to restart, that's a very good idea!

Yes, I used Construct 3. It is an HTML5 & JavaScript based engine but you can easily export games for other platforms. For mobile, I'd export it as a Cordova project, and then using the Cordova CLI I can customize the app for both iOS and Android once.

Alternatively Construct also has some native export options for both iOS and Android. ☺️

The "new flappy bird"? Wow! I wasn't expecting such comparison 🤭 Thank you! And really happy you enjoyed stealing carrots 🥕😁

Thank you! Really happy to read you enjoyed this tiny game ☺️

Despite your warning I obviously clicked on the clock and got the game freezed, lol. But that's fine as I refreshed the page.

I'm not very used to point & click games tbh, and I think it kind of introduced me to the genre. I really enjoyed the game, the storytelling and how seeking little things here and there help us and give us hints.

A few issues/suggestions that came to my mind while playing:

That said, really well done! And thanks for this cool game!