Game Made for GBJam7
Submitted by ElfQueen, tatltuae — 3 minutes, 44 seconds before the deadline
Add to collection 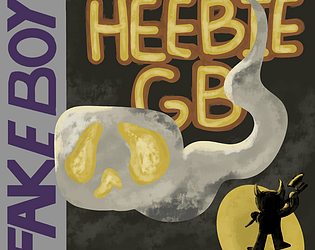 I want to start by saying that the name of the game is just delightfully well thought!

And the fake box art for it is just an amazing addition to the whole package, so kudos for that as well!

The fact that it is a rhythm game already wins a bunch of points in my book and it's a really nice one as well! The game is simple and direct, just approach the enemies and press the buttons in the correct tempo. Couldn't have clearer than that!

Like mentioned by someone else, the game lacks a bit of audio, although the battle theme compensates for bringing the GB feel to it, plus, I really really enjoyed to hear it! Although, the game becomes a bit repetitive at times, having always the same music to accompany you as you play throughout the rhythmic battle. Even though I think the button patterns were always different in each battle? If so, that helps a bit with the whole repetitiveness issue. Maybe have 1 or 2 more musics in the mixture so it doesn't get so dull over time!

All in all, it's a really nice game and the work put on it shows! Congratulations!

Really nice small game! It may lack of some extra music and sfx but the battle theme was really GB like! Maybe too much for my taste... But that's just me. I don't know if the delay with the music starting a battle was intended or not, but the battle itself was challenging, good job!

I was expecting something that would actually play a bit like gauntlet when I saw that topdown camera, but the gameplay surprised me! I don't think I ever saw a gameboy game with these mechanics, so it was really awesome to see something new in the jam like this!

The only thing I wish you had added was some kind of "perfect" or "critical hit" so the player feels rewarded when they hit the mark perfectly, but it's still fun to play regardless of that!

I actually had precision as a mechanic in my last rhythm game, I'm not sure why it didn't feature this time. Thank you for your suggestion.

Nice game with cool fights, but i my reaction time is too slow to survive a fight :P

rhythm games on a game boy, were a game changer back in the day .. so fir this to be here around all these games, makes me hope that it wins, or at least get top5 , cheers ;)

Nice entry! I like the way it plays. Really works well! Well done!

Nice little game!  Very clever mechanics.  Be sure to check mine out.

Rhythm games work real well for jams and I'm unsure why they aren't done often, maybe it's because it's sometimes difficult to match the gameplay up with the music. In this case it turned out really well, I didn't experience any jitters or out of time inputs so great job there! In terms of variety, it would have been nice to hear a couple extra tracks in there but I imagine it was difficult with the jam's timeframe. Either way, great job on this, I enjoyed it!

Gameboy rhythm game is such a fun idea! I only wish there were more songs to slap monsters to. The flexing at the end made it all worth it, hehehe

I think we found the winner of the "Best Title" award