No Time To ShineView game page

"Candle's Dilemma": it lives to shine, but when it does—it dies
Submitted by AtymTima Games — 1 day, 16 hours before the deadline
Add to collection 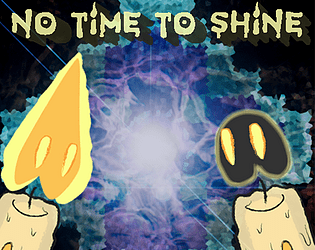 Play Game with... a Candle?

No Time To Shine's itch.io page

Congratulations on your submission! The idea of swapping between two zones was interesting and fun. Presentation is astonishing good, given the one month time limit. Controls feel pretty nice; however, seeing where I am going is difficult given the lighting. I hadn't noticed swapping between light and darkness depleted a meter; thankfully, I found the reset button via the X key. Nevertheless, this is a neat idea with some great aesthetics to complement it. Awesome job!

I like the concept of this, and I think you did an amazing job, making it look very polished and sound awesome!!!!
A little comment on learning the mechanics: In the tutorial it said I should press "a", "d" and "space", but I had to figure out by myself that "w" is the most important button in the game XD
I almost gave up after a minute or two of jumping around and trying to click things, but then I hit "w" by accident and realized how to play it. So my suggestion would be to make that more obvious - to avoid confusion :)

Omg, I’m so happy that you actually found the button ahahah. The thing is that I put the “w” button on the golden flickering platform, so when the character lands on the platform, the “w” button is revealed. But most people didn’t notice it, so I’m planning to remove this feature tomorrow and make a normal tutorial 😂

Thank you for playing the game and sharing your suggestion, I highly appreciate it! I guess it was a bad decision to hide the tutorial after all

Oh I totally missed that :D seems like a good idea in theory, though.

I think it's pretty difficult making a clear tutorial. I got some friends to playtest my game, and everytime I got some feedback I had to change the tutorial, haha :D

I can relate to that ahahah, during the very first playlets of the first version, my little brother couldn't understand how to go through the first level for 20 minutes. By the way, I wanted to check out your game but it's only for Windows :( do you have any sort of video trailer maybe?

Yeah I couldn't make the game audio sync when building for mac or webGL, sadly...

But I've got a video where I play through the game, if you wanna check it out :)  https://youtu.be/qr6xbl-GDQ4

Cool game mechanics and I love the art. It's really a nice character!

I didn't get too far... it's a difficult game, but with more practice, I think I can get the hang of it!

The "limited" time to shine may be a little less punishing or have some way to be restored? I couldn't get passed the first moving platform level... lol

I totally agree that the time given to solve the puzzles is way too limited for the first levels. I will try to change the levels, so that it will become harder and harder slowly with each level.

Nice to hear that you liked the mechanics, and thank you for the recommendation, I will definitely fix the difficulty and time limit! 😁

Really fun and well made game, but its really hard! The only issue I had was with w being the key to change the light, I kept intuitevely hitting it for jump. I loved the idea though, I thought it would be an interesting puzzle mechanic, but even once I'd figured out how to do parts it often took me a while to manage it!

Thank you very much for pointing this out! Currently, I'm trying to understand which key buttons are more preferable by players (since I realized that the current control buttons might not be the best), so I will take your comment into consideration. And I'm glad you liked it, thank you for playing

A little update, everyone!

I made a video about the entire process of how this game was made, hope you'll enjoy it!

really nice job! The animations were so fluid and detailed, that i was surprised to find that the controls were actually complimented by them, as opposed to feeling sluggish as can often happen. The core mechanic is really interesting and the whole thing is presented really well. Nice work!

Hey, I'm sorry for a late response, but thank you for saying such kind words! I'm really happy to know that you enjoyed the game. I was really worried about controls, so it's cool that you found them comfortable for usage. Thanks!

Intresting game, it was difficult to guess what i was supposed to do, but when i got the idea it was very entertaining, well done!

Difficulty of learning the mechanics is definitely something I will be working on. Thank you for playing the game and leaving a comment, it really means a lot

It took a while, to get used to the mechanics, but in the endi figured it out and beat some levels. If i would change something, then the tutorials in the start. Maybe you can help the player a bit more about the mechanics and thight timings. The levels are in all well designed. And i really enjoyed it, especially the graphics.

Sorry, I couldn't reply earlier, but I appreciate your comment a lot! I will consider you words for the future improvements, thank you for that

I loved the game aesthetic, although it was pretty hard from the get go. It might be an idea to space out teaching the mechanics a bit, so you can get used to them. That way when you've mastered one mechanic you can introduce another layer of difficulty. Anyway I liked the game a lot, will come back to it to try some more levels.

Sorry for being late to reply, but thank you for providing the feedback, I agree with you and it's definitely one of the things that I'm going to work on. Struggled a lot to come up with something meaningful for tutorials. Thanks!

The game is a pretty cool gameplay experience. It's very challenging wich I quite like (I think I reached level 1-3 ). Maybe a little bit less speed on the platforms falling when you are on top of them would be an improvement, but i guess that depends on how hard you want the game to be.

Oh I see, I actually had several versions of the speed for them, and I used them later in the game. So, I'm glad that you pointed it out, I will think of playing with different speeds. Thank you for a comment and recommendation, I highly appreciate it!

This was super cool, but I think it needs a bit more guidance as to what each button does and what you are trying to achieve. It took me a while to understand it.

Other than that, awesome concept and graphics are neat and the atmosphere is just great!

Yeah, I didn't want to use the common methods of showing the buttons on the screen, but couldn't  come up with better idea. I will think about how to make the levels more intuitive. Thank you for leaving a comment, I appreciate your opinion and will definitely consider your recommendations

FOR THE LOVE OF GOD TELL ME, how do I pass Tutorial 2? I feel like such a loser! :D This character is SO cute, and the ambiance you create just by the synopsis and game page are amazing! Way to go! I love the game play too, as others said, artwork could use polish but really neat idea and one of the best characters I've ever seen :)

Ahah, I will upload a video on the YouTube channel with the play-through of the current version of a game, and then update these levels to make them more intuitive. Your comment makes me really happy, thank you for sharing your opinion and suggestion. I will work way more on the art now since the game jam is over. "Have a good day" (c) Shine

Such a cute character, really neat ideia! With some work this could be a great game. Good job!

Thank you, I'm happy that you liked Shine and the idea ahah! I will consider all opinions to improve the game, so I appreciate your feedback

The game mechanic is a super cool idea! I think with some more visual clarity and polish this could be a really good game.

So happy that you liked it! Thank you for posting the feedback, I will try to use your suggestions

Loving this game  mechanic ,  Yes this is something you should carry on working on  .

I'm really glad to hear that, I will continue to work on this project, thanks :) By the way, your game is great

The mechanic and gameplay was really cool. The art could use some work.

I appreciate your comment, I will definitely work on improving my art style. The art in your game, though, is amazing! Loved it

Great work indeed, I got quite far but the second make the rules where it started the other way seemed to be quite hard! Loved the mechanics and the idea, agree with cam 100% you should continue working with this.

Hey, thank you for playing and providing a feedback for the game! I guess I will make the complexity of the levels to grow smoother ahah. By the way, I can't download your game, do you know why? I will try it again later on another computer. But again, thanks!

really what kind of problem is it giving you? It should open Google drive and you can choose either PC or Mac build and those should work 🤔 Let me know if you don't get it working and I'll have a look at it.

I will update you with it tomorrow!

Great work with the different mechanics. Admittedly I didn't get past the level where you introduced the fast burning candle. I got confused and quit. I found the controls cumbersome on a keyboard but if you have controller support that might have worked better.

I actually really liked how you modified the "run game" message on the web player. How on did you do that?

Keep working on this!

Thank you for posting the feedback for the game! Yeah, I totally agree that the learning curve is still steep, and some of the tutorial levels don't feel as intuitive as they should (I guess hiding the key to restart the level on the floor of this level, where the light flickers, was a bad idea after all). I actually have more than 20 unused levels, most of which are alternative versions of introducing new mechanics. I will definitely try to come up with better ideas for them in the future since the Game Jam is over, and I have more time to update the game.

Regarding the "run game" button, there is an option in the "Edit Game" menu called "game noun" or something like that. By default, it is set to "game," but you can change it however you want.

By the way, what exactly made the controls feel cumbersome for you? The late responses, movement speed, or just overall? Thank you again, I appreciate your support; I will check out your game once I have free time :)