Manage a whole ecosystem in order to withstand a fearsome winter
Submitted by ItsBugSeasonTeam, JulioPaniaguaM, ArtemAnikin — 29 minutes, 3 seconds before the deadline
Add to collection 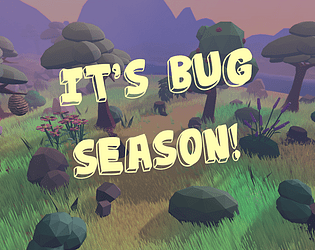 I really like this game. An ant simulator combined with a clicker game is a cool idea. I really fell the need to keep on growing. Well done!

Loved this game, so peaceful, yet so challenging! Great mechanics

Wow, nicely done! It's well polished game, very relaxing to play.
It's running a bit slow on my browser though, but it's playable :)
Great job

For a game created within 30 days for the jam, that's a one hell of an impressive feat!

Everything, from graphics, sound effects, the little details (such as seasonal changes, and bugs actually being there, moving), and the design of the entire game, has been done flawlessly! It almost feels like a full fledged game... I mean, it is, but it is not usually expected for game jam games to be of this quality and finish!

The gameplay is also good. It's surely unique, and seeing a strategy game is not common for game jams, let alone the ones with this type of unorthodox approach to the game mechanics. However I must admit, that the instructions could be a little bit clearer. There's quite a lot of mechanics here to learn and to keep mind of during playing, and that can be a bit overwhelming at the beginning. I eventually got the hang of them in my second attempt, but still had problems keeping all the variables in my mind and planning out my moves accordingly.

But still, this is probably one of the better entries on this jam, and it sure is the best one I've played as of writing this review!

woahh you created something that feels so alive..

the graphics and music work perfectly together.. I want to climb into my screen and live in this little magical forest.

I cant get over the little details like the bugs actually moving around and collecting things, it's super impressive.

It's like a modern point & click game! Love the visuals and the world we play in and the audio is just so calming to play too!

Loved the aesthetic, loved the audio, and overall this is a great game. Well done!

The aesthetic drew me in. I like the way the different bugs go about doing there thing in the forest. I also like the difficulty scaling and skills after each winter. It's a great idea that freshens up the gameplay. I also like how the difficulty amps up quickly. It's all fun and games in the first year, but in the 3rd I'm clickin like a mad man.

I think the gameplay could be made to be more satisfying though. Having to click for each bug got old fairly quick. Having more interesting decisions similar to the worms to butterfly conversion would have enhanced the gameplay substantially. In games like this where maximising resource production is important, aspects such as the ants falling off in relative importance is notable. But I also assume balancing interweaving resources would be very difficult so what you've done here is great!

The highlight for me was watchin them little bug bois running and flapping around, then later on realising how wild my clicking and moving around the scene was.
Well done!

Amazing feedback thank you so much!

We are glad you grabbed the idea so well, At first we have many bugs planed, but as you said, balancing interweaving resources can be a long mess so we downsiced the scope a little bit to make sure the forest looked fancy and alive .Hope you enjoyed♡

This was one of my favorite games would totally download something like this on my phone and play it.

Wow Thank  you! Maybe keep an eye out for that mobile-thing in the future 👀👀

A very interesting and well executed game. I'm a bit lost at first, but once I've figured out how to collect the apples, things are a lot more interesting. I like how unlike the typical resource management game where the resource gathering is hidden behind a building, you can see each ant being simulated and do their jobs. The change in lighting is also very well done and works well with the atmosphere you guys have created.

A few things that I want to point out is that it is a little hard to tell what the upgrades do since they're mostly text. Also, the frame rate stutters a little for me, but that's probably just a me-problem.

Thanks for the feedback! You spotted some of the most discussed elements during the development, we also wanted to change the text to a more iconic based feedback but time does not grows on trees unlike apples, and the winter was near♥

very impressive on gathering bugs. how many levels here? i complete 3 winters then dead at 4th.

Submitted
Metaverse: Emotion is a Bug
LikeReply
ItsBugSeasonTeamDeveloper364 days ago(+1)

Thanks so much for playing! passed the 3rd year the costs may scale too much because its supposed to be an infinite progression

This is a Frostpunk-ish resource gathering game in disguise as a chill game. I love the concept of resource management and racing against time.

Submitted
Metaverse: Emotion is a Bug
LikeReply
ItsBugSeasonTeamDeveloper364 days ago(+1)

Yeah! when you realize that the winter is near the relaxing part goes away pretty quickly, hope you liked it

Damn this was a surprise, well done!

Definitely the coolest game I've played in the jam so far.

Really awesome job with the visuals and game design.

Audio is done really well too.

Wow! We are really glad you enjoyed our game that much ♥