Return back the spells that were stolen by the dreadful necromancer
Submitted by Ice Drum Games (@ice_drum_games) — 1 day, 10 hours before the deadline
Add to collection 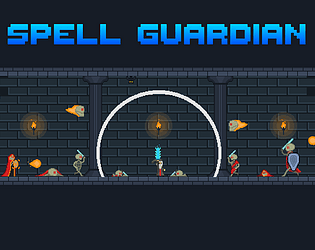 Let people know how long this project has been going, or share a bit of its history.
I have started this project after release of my previous game "The Wizard's Scroll" in may of 2019. It is some kind of remake and I planned to complete it to the end of September but it released only now and I'm happy about it!

It takes a little bit of skill, but overall is pretty good : )

There's a lot here! The art is cute, and the music is pretty good. Took me a while to sort the controls out, having fire on the mouse and aim on the keys felt a bit odd. Otherwise, well done!

Nice game! As has been mentioned, there's a lot of content. Well done.

Glad you liked it. Thank you for the feedback!

nice platformer! The controls we're really tight, and I really appreciated how every death felt like it was my own fault. nicer work!

This game almost requires a gamepad. Or at the very least a Hollow-Knight-like control scheme, where you have both hands on the keyboard instead of using the mouse. The platforming's too tight otherwise... feels more like the skill of reaching for piano keys than reacting to the game. I like the challenge level though.

But this is fun and cool.

Thank you for the feedback. Custom control scheme is ready! Gamepad support will be soon!

Cool game! Got a lot in here!

I really, really wish you had gamepad support, but I still enjoyed my time with this one... Very cool game! ^ ^

Thank you! Maybe later I will make it

This game is amazing and I will entail my full opinion on it below:

Awesome (as in, it feels as it should or quite close):
-The idea of this game reminds of a lot of games that I enjoyed/enjoy
-Upgrades (they definitely make the game experience feel better and better)
-Slowly putting the player through more and more challenges
-"Secret" areas
-Boss fights (I only experienced the first one, but I am sure there are more)
-Music / Sound

Not so Awesome:
-Lack of enough checkpoints (I am not saying to put a whole lot more - and to be clear, I am talking about the normal ones and not the portal ones - but this is one of the reasons that I, as well as other players I am sure, eventually gave up on pressing onwards)
-Flying enemies that come towards you -> the idea itself is good, however, either due to the level design (having a lot of crumbling platforms instead of normal ones while dealing with them is a bit annoying and so is falling for a long time and having to wait for them to reach you) OR due to the fact that you cannot aim easily enough (with the mouse for example) to take them out and most players will wait for them to be on the same horizontal plane as them before trying to actually destroy them
-Level Design - now, this is not comparable to the two above, however, having more "easily reachable" platforms/areas would definitely help the feel of the game instead of making the game feel like you are always "barely reaching" everything around you - I mean, you have magical wings and you should feel like you are actually reaching stuff easier due to your "double jump" instead of making this a necessity - this should feel like a privilege to have

Lastly, the only thing that I want to say is that I wish I had more time to play your game xD

Thank you for the feedback! I'm glad you like it!

-The problem with the checkpoints is that there are not many levels and the checkpoints stay every two of them in general. If there will be a checkpoint on the each level it will have no challenge to the player. May be there is one place where I will make a checkpoint but i guess it will be only one.

-Flying enemies. The best way to beat them is using sword (also it have upper attack).

-I needed to give the magic wings during the playthrough instead of the beginning :D

This is so cool! The art and gameplay is great :D! I love the atmosphere too!

Wow. That is a really impressive big project. I love the atmosphere and enjoy the gameplay very much. I personally definitely needed that tutorial to learn the controls though (Gamepad support would be awesome).

- I had one minor issues with the jumps: One time the player did not want to stop jumping and was jumping up and down on his own (only stopped once he died. It never happened again but hey those rare bugs/features are the best ;)

I'm very happy that you liked it!
Maybe in the future I will add the gamepad support.
This is really strange bug :D

Looks like lot of work!
I like the pixel graphics.
The tutorial part is a bit boring, the environment is quite empty there.

Glad to hear that you like the graphics. May be it is too long but I wanted player to get the information and understand how mechanics work, even such easy like jumping because sometimes I see players that cant figure out how to jump without detailed tutorial. Also I wanted to add the new elements of environment gradually as the game progresses.