Not everything is a walk in the park...
Submitted by PolyMars (@PolyMarsYT) — 2 hours, 29 minutes before the deadline
Add to collection 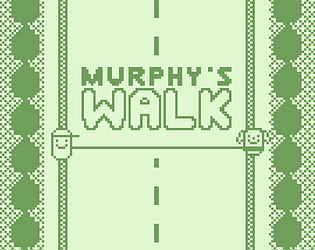 Theme
In Murphy's Walk, you control both a man and a dog who are on a walk together. The two are connected by a leash, and if either the leash, the dog, or the man come into contact with an obstacle, it's game over!

I feel like the game plays too fast or maybe I'm just really bad at it :P But the sounds and artstyle are super cool!

I love this, but I'm very bad at it. Definitely fits into the Flappy Bird "Double Digit Scores are An Achievement" category.

I look forward to trying it two player.

This was a a really though one.

The speed of the game doesn't give me enough time to get my bearings and get used to the controls and I end up dying before I even understand what happened :(  I first tried as 1 player but my brain is not fast enough to process the switching in time so I changed to 2 players which I didn't fair much better as the characters didn't move the way I thought they would. lol

I think the ideas is really good and fun and works very well with the theme but perhaps start the game at a much much slower speed with much less hazards and as you go through "sections", like milestones, then you increase the speed a little more each time and increase the total hazards on the road since this game has the "arcade" feel to it where you play until it is impossible to beat.

I really like the art, specially your use of dithering! The game was super difficult with the keyboard, but a little more manageable with a controller. Great sound and music too!

This game is so hard that most of the time i thought im doing something wrong. Maybe its easier on 2 player mode, but i have no one to play with :( By the way - quite creative use of extravert challenge. I like art style, but stopping music when you die is something quite annoying. It could be a really good game but it needs some serious polish. But anyway it is great entry with interesting use of the theme :)

Great visual style! Super challenging, too. I wouldn't say it's a big flaw, it's something you can easily tune, but a bit more playtests for future projects wouldn't hurt

Thanks for the feedback! I agree that the game is pretty frustrating, especially without a controller. I should definitely spend more time balancing difficulty in the future.

Super duper difficult. The quick restart combined with the nostalgic, upbeat music and made for fun meta-game of retrying again and again to get just one more foot.

Wow this is very difficult! I wish the leash did not count as  death! I still like the concept however! Good job!

This is an really great game that uses alot of challenges well. I really enjoyed it however it was WAY TO HARD. If you want to play my game here and give it a rating(once they fix it)

Thanks! I agree that the game might be a little unfair, especially without a controller. I definitely have to spend more time balancing difficulty in the future. I appreciate the feedback and I’ll be sure to check out your game as well!

It's quite challenging alone, barely got a few feet xD