Play as a cyborg and kill to get electricity.
Submitted by c0d3d — 7 minutes, 52 seconds before the deadline
Add to collection 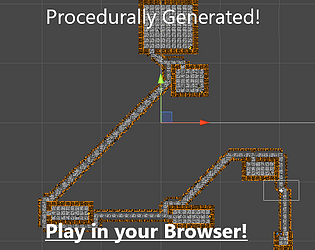 Theme
The way it is implemented is from the Data Terminal or shop which you "plug into." Also, the way you win is a Data Terminal which takes your data outside the facility.

The game's style is so great and the sound effects are just beautiful and amazing.... I finished the game already but registered to itch.io just to rate this game and leave this comment.... luv ya!

I'll start with the biggest positives:

I like the procedural level generation, and I like the sound effects. I mean, really, the procedural generation sometimes doesn't feel entirely procedural even, it's pretty neat.
Also a rather ambitious idea to make something with procedural generation in such a short time span.
The shooting in the game actually feels pretty nice with how fast the bullets are.
The upgrade mechanics seem pretty neat, even if I haven't been able to get all of them yet and thus can't comment on the quality of all the upgrades.
The game controls pretty nicely, with fast and responsive movement feeling rather nice.

Not everything I have to say is positive, so I'll do my best to voice those issues in a constructive way, since it sounds like you wanted feedback:

The homing projectiles are a bit annoying (that might be something of an understatement, any room with too many homing projectile enemies pretty much requires you to stand at a distance and attempt to snipe them), I feel like just having the enemies simply shoot projectiles that moved in a straight line would have been more fun. Maybe I'm just doing something wrong but I admittedly wasn't able to beat the game because of it. Maybe I just suck at the game though. XD
I also wish the enemies were a bit more common, because like I said earlier the shooting mechanics are a decent amount of fun. I tried using the dash but it doesn't seem to do anything but leave blue particles behind, I tried holding the button and nothing seemed to happen at all. I'm probably just doing something wrong though, heh.

Even with the negatives in mind I overall liked it! Would definitely love to see a more polished version some day.

Holy crap, Thanks for the long review! The homing projectiles I agree were annoying but it was at the end and I decided I needed the time elsewhere and the bug became a feature lol. Also, the dash was there but, I realized it wasn’t noticable enough after when my brother played it. Thanks again!

Lol. Those sound effects got me, in a great way! I always find it fun when someone uses their voice for effects. I applaud you for your ambitious to create something procedural generated and, like you said, the learning's are often far greater than having some thing flashy and "safe" but not fun or daring. (Been there myself a few times).

I hope you continue to work on this project and polish it some more armed with the knowledge you acquired while making it. Good job.

Thanks for the feedback! I really appreciate it. The sound effects lol I had 45 minutes left to add them and build to webgl so instead of making them using the ludem dare suggested tool for sound I had to improvise.

Also, seriously please do continue to develop dot ninja I think it could be a really good mobile game one day.

Also, since I ran out of time to polish about 5% of the time ish the generated map won't have the end room connected so you can restart or stop if you want.