Submitted by Doomky — 1 hour, 25 minutes before the deadline
Add to collection 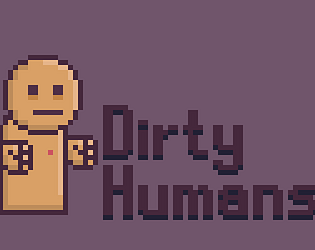 Nice game, a bit strange to see life go below 0, and some glitches in music/sound. art was very nice, add a bit of background after the jam. played and rated.

The game as a great sens of humor

I couldn't find a link with the theme..

The music feels is catchy at first, but get repetitive over time

Good animation on your characters

There are some bugs when you click on a button, while the text displaying, it repeat himself.

This game is really fun to play but there are a lot of bugs. The text scrolls over the number of days survived. The enemy stats stay on screen when the game over shows. Sometimes the game takes inputs when nothing has been pressed.

There are also lots of improvements that would be great, like how do I know if I want to equip something if I can't see what damage it does? Or not being about to get the same encounter twice in a row.

Ultimately I think this could be made into an awesome game, i understand you wanted it to fit the theme of jam, but I think the lying portion actually held the game back a bit in a way. I would be interested to see where this goes if it gets worked on after the jam.

Submitted
The Rise of Colour
LikeReply
buhubuhuSubmitted2 years ago

This music is awesome... and characters looks like they dancing to the rhytm.

5 stars on Audio for sure

that items can break is a cool mechanic.

But the text is sometimes a bit repetitiv.

Here's my feedback on your Dirty Humans:

Hi, thanks for your feedbacks !

For the theme somes events are trap and the game lie to the player,  exemples: fake merchent you sell you another item that the one which is described, the event where you meet a stranger and the narrator ask if you want to greet him but then swap it to attack him

This is a simple but fun and very replayable game! Loved the effective graphics and the humour that was thrown in. My one suggestion would be to get rid of some of the repeating text (Person X joined the fight etc...) to speed it up a bit, but it was a great game nonetheless!

Nice job I really like the graphics for this one.  Simple but they have lots of movement and juice.  Cool game!

lol i somehow over enjoyed the characters and their animations :) good job

Wow, a cool concept for the game! I had fun playing this, the music felt really nice with the graphics, overall well executed game :)

I had so much fun. The game play was new to me and i didn't expect it to be fun, but i was wrong. Great job. Check out my game when you get a chance... looking forward to read some feedback.

Love the art.  Love how the animations of the characters fit close enough to the beat of the music that it feels like they're all dance fighting together, lol.  Lovely animations and info pops (the brawling results, etc).  Love it!

I REALLY liked you game! Congrats!

It was so creative and fun. The music was great and catch, but the typing sound was really annoying. :P

My only suggestion was to make the game go a lot faster (like not making the text appear letter by letter, not make "Merchant joined the fight" and stuff).

Anyways, congrats on making it! If you have some time, I'd love if you checked out my game! ;)