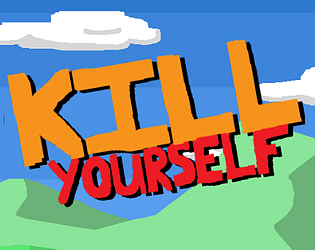 Ranked from 70 ratings. Score is adjusted from raw score by the median number of ratings per game in the jam.

In what way does your game fit the theme?
After the player dies, time rewinds and the player is put into a new location, but now the ghost of their past self is running around, on the path to inevitable death. The only way to stop them is to kill them first.

Did you write most of the code yourself and made all the assets from scratch?
All code and art were made during the jam. Music and sound were downloaded from online. ( Credit: https://www.zapsplat.com/ and http://dig.ccmixter.org/ )

This game has a really good design, i liked.

Dang this is a super cool game. I can see this being made into a hectic multiplayer shooter. All it needs is a level select, multiplayer, and maybe character sprites and I could see this on Steam. Would really love to see this iterated on post jam.

We have every intent on creating a full version of this game post-jam :D

Cool Idea not really good made there should be a level system and stuff you should do, the graphics and the models was bad also the music wasnt the best but its fun when you have to save your friend over and over again but it gets easily boring. Overall good idea good innovation but not well done made.

This was really fun! It took me a minute to get into and realize how the game works, but once I did I had a really good time. Very unique concept. I'd love to see a version that's a bit more polished (different colors for each "player", game feel/juice, etc.). Nice work!

Submitted
A Time To Rewind
LikeReply
BlueMerleGamesSubmitted241 days ago(+1)

Loved your take on the theme! 5 stars for sure. I had so many of my dead selves on the screen at the same time! lol

Please play and rate my game as well!

+ Art and sound are simple but they work for the game

+ I love the idea and how it fits to the theme and I've had so much fun playing!

This game is really unique, and I really like the graphics and music. Good job!

This is one of the most unique games I've seen in this jam so far.

The player has to consider that every movement input counts. Their movement determines how the enemies are going to behave, so the player has to determine how to get to the enemies without screwing themselves on the next round. The player also has to determine the right times to shoot with the factors of how often they shoot and when to shoot. Players can't just go around spamming the fire button or they will make it harder for themselves with their ghost rapidly firing as well. Having the ghosts be able to shoot and damage the player really prevents the exploit of having the enemies move into one corner and just firing at them in the exact spot. The ghosts are completely uncheesable, you just have to keep moving.

The colors are at just the right level of saturation and are pleasant to look at. I like how the dark abandoned building with bright red spikes contrasts with the colorful bright green hills and daytime sky in the background.

The controls feel incredibly smooth. I liked that I had the ability to change my height with the jump and the ability to bunny-hop by holding down space. It felt fun to just run and jump around the stage even when there were no ghosts around. As I was messing around with the controls, I discovered that I was able to double-jump midair which was not mentioned in the instructions. Was this meant to be a secret mechanic, or was this accidentally not put in the instructions?

One thing I feel could really be improved is to make the game feel less samey after every round. Even though there are a lot of strategies that could be discovered in different maps, every round starts to feel the no different than the previous one with no type of variety left to discover.

Here are two suggestions I could think of to make the game feel more varied:

The ghosts could have a randomized delay before spawning. Having the player not know what ghost is going to spawn first can make each round feel unique with different varieties of ghost movements occurring differently. Perhaps there could be different types of spawning each round, such as spawning enemies in rapid amounts, spawning enemies in groups, or just spawning them at true random, to think of a few.

There also could be a variety of ghosts that could spawn, such as a ghost that moves and shoots twice as fast than before, a ghost that multiplies itself and has slightly delayed versions of itself following behind, a ghost that fires explosive missiles instead of bullets, or a ghost that leaves a trail of flames behind that damages the player. It would make each encounter with a ghost feel more unique instead of dealing with the same exact enemy every time.

Another thing that could have helped during the beginning of every round would be to graphically make it easier to tell which entity is a ghost or player. While the red spots on the ghosts do seem to indicate which entity is the player or not, it's not too noticeable to see as I'm scanning the area around for the player. Perhaps if the ghosts had some contrasting bright colors added to them it would make it easier to find out which square is a ghost or not.

There were some moments where it was hard to tell whether I hit a ghost or if they died from another cause since there was no sound indication of either of these things happening. Having two different death sounds should fix this. One death would sound satisfying and hard hitting, with the other sounding disappointing and low-pitched.

I also would have liked to know what my score was during gameplay instead of waiting until I lost my last life. Showing my score during gameplay would make it feel like I'm making progress as the game goes on. If I don't have a scoreboard, I just end up feeling lost as to whether I'm doing well or not.

I would have liked the option to be able to restart the level. There were some points where I didn't like how my ghost's movement came out and that I just wanted to start over.

I felt like the ability to choose which stage before playing would be a useful addition as well. Perhaps in the future you could include a stage selection screen with the option to choose a random stage.

Otherwise, I'm hoping to see more features added to this game in the future since it really seems to have a lot of potential with its strategized gameplay and smooth controls.

Also just for the fun of it, I wanted to see what would happen if I activated a rapid-fire left click macro and fired hundred of bullets at once... I might have found an oopsie in your game: 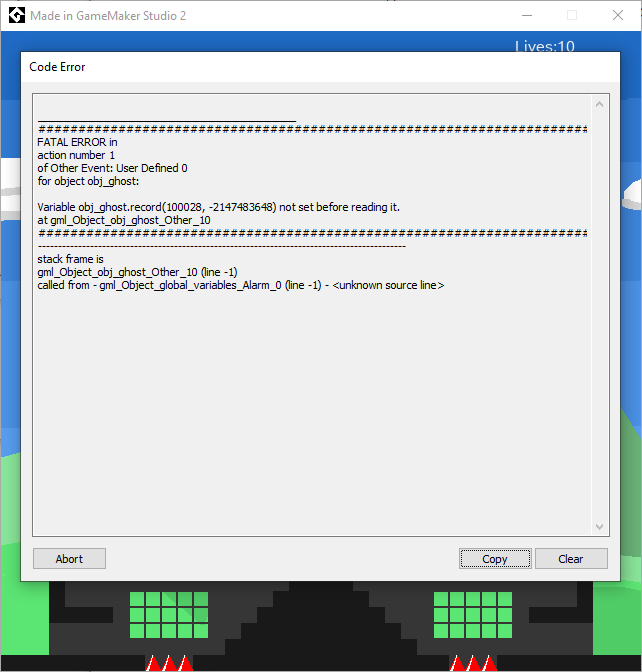 For the ghost randomisation, I'm afraid that having ghosts spawn at random intervals will seriously mess with the flow of the game. If a ghost is even a second off target, they'll start missing shots which will turn into more threats to the player as bullets fly around, and would just be unfair. Likewise, with the random weapons for each ghost, if a player dies to a randomised weapon, the ghost the next round might not die from it, resulting in a ghost that will just die for no reason.

However, I think a good way to combat this would be to give the player random stats and random weapons at the beginning of each round, with the weapon being constant with their ghost throughout the rest of that game. That way we still have different enemy types as well as different gameplay without messing with the syncing of the ghosts.

And with the whole "exploit-proof" comment, you really tried to exploit the game, didn't you? xD

Unique concept with a fun gameplay loop. A suggestion would be reducing the acceleration time for the horizontal movement to make the controls feel more responsive. Overall, a great, genuinely enjoyable game.

Will definitely keep this in mind while updating the game :

really interesting concept, I had trouble finding my character because the colors didn't vary between past self and current much.  I really liked the overall feel too it felt nice to control the character! overall great job!

Thanks for the feedback! :D

Music is a little off sync, but interesting! Great work done within 7 days!

Yeah, there's a reason why the music sucks. There's a bug where whenever you load into a new room, the music is played again, on top of the music that's already playing, and it just get's really messy if you play multiple rounds.

Otherwise, thanks for the review!

Very intriguing game with an engaging loop. Music burns itself into your brain and is why I eventually stopped playing. Great job.

Yeah, there's a reason why the music sucks. There's a bug where whenever you load into a new room, the music is played again, on top of the music that's already playing, and it just get's really messy if you play multiple rounds.

Otherwise, thanks for the review!

What a fun-to-play game. The only thing I don't like is lack of theme and some error but it's OK.

Once you get past the title, it's a cool game :D I really like the concept, but the audio seemed a bit off and distracting so maybe try some other tunes and see how it goes :)

Yeah, music wasn't ours. We got some royalty-free music from online. There was also a bug with playback, so that might also have caused some issues.

Thank you for the review!

That was a fun game! I found myself playing it for a while, the different map layouts makes it very replayable. I also like your take on the rewind theme, it's very different from the other games! One thing I'd change though is that for some of the maps, it's impossible to jump to the top if you spawn at the bottom. I'd add a few extra platforms to fix that issue. Overall, nice entry!

Thanks for the feedback! Will definitely keep this in mind when creating the full version :D