A boss rush game made for the BTPJam3.
Submitted by tarrcolt (@DeveloperTarr) — 5 hours, 8 minutes before the deadline
Add to collection 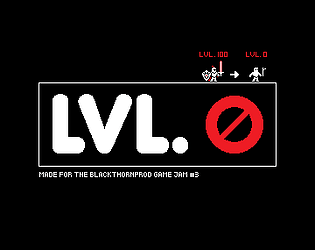 Well done!!! I absolutely loved this game, it's a shame it hasn't been rated more! Easily one of my favourites from the jam!!

I'd like to day I'm really satisfied with this one. I like the way you interpreted the theme and put it into the game. Its really fun trying to get to the demon and back again after it dodges away. Usually in games you get better at it but in this one you get worse. Great job :)

Ok, this one I'm keeping on my PC. I love how at the beggining you're just kind of mashing buttons like a Tekken begginer and as you level up you get so much more methodical, so much more calculated. It's incredible, really. I love the down-leveling descriptions - the wizzard's character is just an awesome cherry on top of it all. The boss's attacks are varied and well telegraphed, the audio design is the best one I've seen in this jam so far. It's awesome. It's just awesome. One note of criticism - the giant's toothpick - that weapon that uses a ton of stamina - is a very big jump in stamina cost - it was a pretty touch step-up, might want to tweak the numbers a bit there. Also the dash input was a bit strange at first - that you need to press D first, then move to dash - a bit hard to do in the heat of battle. I didn't really use the shield, as dashing away from danger seemed a lot more fun. I'm on lvl 37, with most points left in the dash and a few in the weapon. I should be able to get to lvl 0, but the game's much longer than I first expected.

very good i really enjoyed it, but there is just one thing that i would add and that's to to only move when you just pressed the key cuz i would accidently hold it for a split second to long and my guy would move into a spot i didn't want him to move witch got vey annoying and felt more like it was my keyboards fault or the games fault so only on key press then move not while the key is being held i think would be better. but other than that great game!

I really loved the game! Spent so much time playing it yesterday. Haven't finished yet, but it is so much fun and challenging!

I'm fascinated by it.

There's some grind in the start, but I think it has its pros, beacuse you're learning how to play it.

If you could check my game too, that would be awesome :)

Cheers and best of luck in the jam!

The idea behind this game is great!  The de-progression system is a very cool concept.  However, you don't really feel the effects of the debuffs until you reach the very bottom of some of the skill trees.

Ya, I definitely agree. The game is kind of a grind from the start to the middle, and I'd probably have less "nodes" if I were to do it again. Thanks for the feedback!

I'm still fascinated by the game. A great main idea! I couldn't find any cons in the game.  If you want, then please rate my game.

It gets a lot harder and a lot more fun. I just dropped the shield and thought huh, the game is easy and then I got to know that I have to get everything else Level 1 too (;_;) . Hahahaha! Really like it! Also the sound and music totally match with the game.