Fun gaem. Personally I think the falling pieces have too many walls, and I ran out of energy too fast (plus I wasn't sure how to get more energy), but besides that I had fun with this genre mash up!

The game's flow is a bit confusing to me, because it's clearly taking tetris as inspiration for some things, but it doesn't really play like it at all. It works better as a puzzle game without the pressure of the pieces dropping, so I think a change in perspective could do something for it - perhaps something like having a board where pieces may come from all four sides? With the ability to rotate them, or the ability to switch what side they're on. Something like that.

Other than that I do like the puzzle style gameplay in itself, and the levels do get challenging as they go on. I played for a while, however I hit a level where this type of block would always appear, which would freeze the player controls other than still being able to use the pause menu: 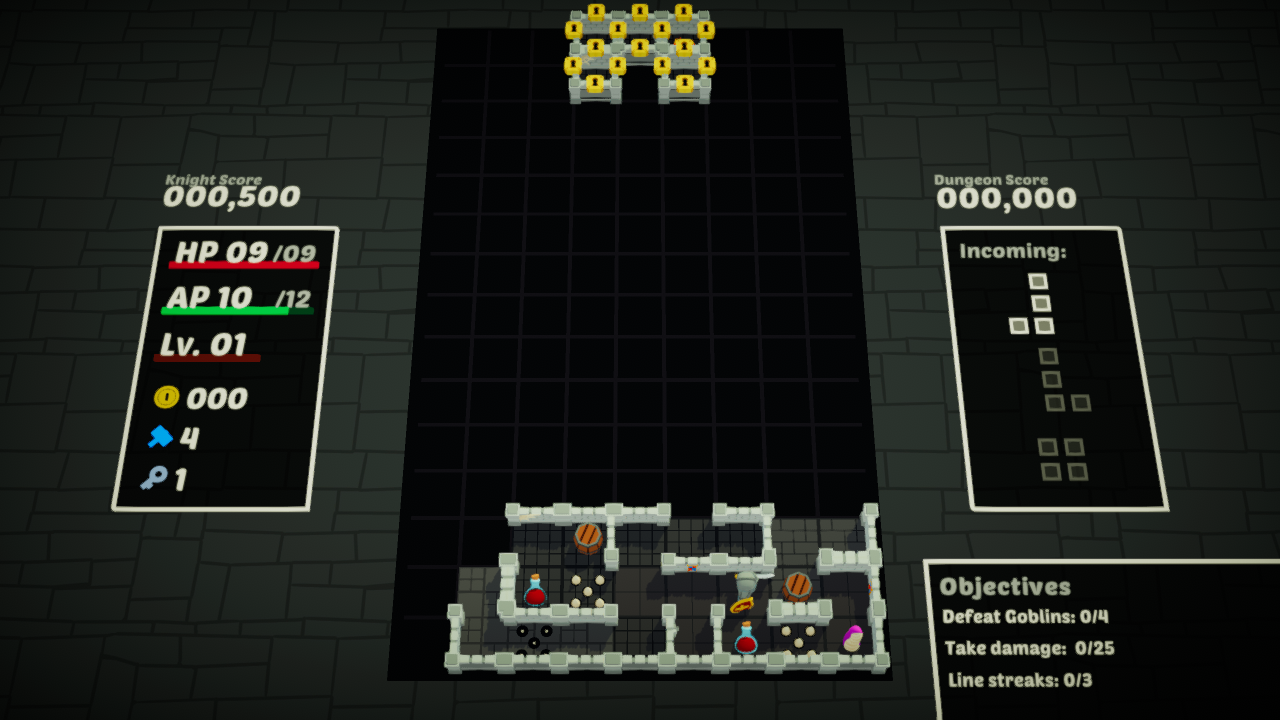 Ooh boy, I said I'd play it, but this was rough. I found the division of what you're doing to be not great. If it was me personally, I'd look into playing Henry Hattsworth on DS. That game had it where normal gameplay was Mega Man Zeroish and it switched into a puzzle mode at times too. I honestly think trying to move pieces and the knight at the same time is way too much to ask of your player.

This is definitely a good game / concept but as others have mentioned, it takes a while to figure out. In my first game I went to clear a line as quickly as possible, because the 'tetris side' of the game is most prominent / obvious at a glance. Of course I ended up killing myself because I was standing in the cleared line. In the next game I died to a monster because I wasn't paying attention to my HP. Basically it took a while for me to figure out the 'dungeon crawler side' of the game to keep myself alive.

I guess that's the challenge of combining two completely different games into one, how do you marry them together so that it feels like one game instead of two?

Maybe an in-game reason why the cleared lines are dangerous? (like if they flooded with water or something before vanishing) Maybe as someone else suggested, a build phase where you take turns between a block falling and moving your knight? I played with the move-separately control scheme.

You did a really good job with this, and it might just need a good tutorial or introductory level to help new players "get it". Love the art style too by the way.

Not my cup of tea but seems like it could be a neat mobile/Switch game. I thought the default controls were very intuitive and easy to pick up though. I didn't realize I could break through walls so I thought I got stuck and retried a few times.

Very cool idea for your game. My thoughts are similar to the other 2 comments.

Overall its a cool idea for a game.

Pretty fun, but takes a lot of time to wrap the head around.

I played with a controller.

Thanks a lot for playing and the feedback!

I get what you mean. In the fist prototype I had it so you had to hold down a separate button while moving to use the hammer to avoid this kind of mistake, but I removed it because some people found it unintuitive.

this might not be what you want, but in the options you can make the tetris pieces not fall automatically. if you have suggestions for how to make the switching less awkward I'd love to hear them.

that's odd, as I set up the code so that you have to let go of the button before being able to drop another piece. what platform were you playing on? maybe it's a specific issue to the web version... still very odd and definitely unintended.

hmm I tried to make the first level easy and short but I guess I failed. I should revisit the idea of a tutorial mode.

that's fair. originally I did it like this because I didn't want the players to only look at the projection of the piece, but I'll do something about it

true. I'm not sure where I could put them as the UI is already pretty busy. this is another thing that a tutorial mode would help with maybe.

hehe that's fair. this used to be the only control scheme in the first few version. I added the new control scheme a while ago to simplify the controls and the game itself since with 'unified' controls, you only have to focus on one part of the game at once.

again thanks a lot for this, and I hope you'll look forward to the finished game!

The concept of the game is quite interesting! It's quite fun too. I think the design could use some polishing. Having to switch from using the knight back to tetris mode at the same time is a bit awkward. Maybe you could fix this by doing phases? Example: Place three or four blocks THEN only use the knight. And then repeat.

How much time did this take you to do? If you fix these small issues the game isn't far away from being to ready to sell.