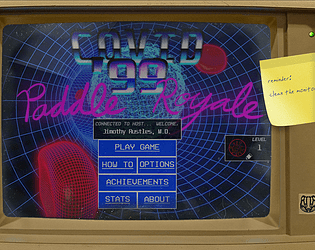 I never got the chicken dinner, the intellicell dinner, but I like to think the patient still made it, as their cells violently killed each other via web-developer-powered network battling.

So yeah, very fun game! I especially liked the blast mechanic, I felt like waiting for the right moment where balls come from every direction and blasting them all away was the best part. The infection meter made for some hype moments too, especially near the end. Another cool thing was the fact that it keeps track of kills (and shows them in the final ranking).  As far as bugs go, the only thing I encountered was that it froze during my first session after a T cell got past me(?), but I wasn't able to replicate it and it never froze again, so it may have just been some web shenanigans. Anyway, great game all around, keep it up!

Yeah cool concept! I played a few matches before this current build and I could see a lot of improvements since then. Good work! Post Covid-Chan!

Interesting idea. I had issues with, in full screen, never feeling like my paddle was perfectly lined up with my mouse, and I whiffed a lot of shots due to this. Other than that... It really was a lot better than I expected. Keep up the good work!

Really fun! Don't have much to add, I will say that the HUD elements I don't really pay attention to because I can't take my eyes off the paddle area.

I really like the overall aesthetic of the game, and the gameplay is simple yet surprisingly fun. Just give it a slight polish, and I could see this becoming decently popular.