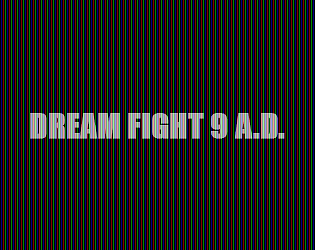 I don't know what I expected but this wasn't it.

also based Stickler is my new main

Thanks for testing/feedback! I'm glad the controls and/or the stick man worked for you!

Very interesting project. I don't really like fighting games but I could see people enjoying this one. Not much I can say since I'm not the target audience but keep up the good work.

I think that you fill this up with original characters, even parodying famous characters can make the story mode quite fun just for the absurdity. About the gameplay, the normals still seems kinda clunky and most of them don't link into other normals, except into themselves. With that said... here's my tier list for the original characters!

Tier S:
Kat. This duo is just too powerful for this universe. Both their fireballs have almost no recovery frames and they hit knocked down oponents, which causes an infinite just by spamming the fireball from anywhere on the screen. pls nerf

Adrian. The exhibitionist is not far behind the duo, since she can also stunlock her opponents just by mashing Down+HK. Unfortunately for her, this only works at medium range, so she will stay behind Kat.

Yeah, the Stickler got the short *stick* in this one. It has good normals, with good range and speed, but still get ouclassed by the two monsters in the top of the tier list.

The tier list is completely 100% scientifically accurate, maybe even 200% into the future.

But really, this is great, thanks for the deep analysis of the OC characters! I totally agree with the assessment, I'd even downgrade Stickler to D because I really dislike his normals, they're all extremely short. Can't even stunlock properly, like normal characters.

I did semi-forget that Kat's fireball basically turns everything in front of him into the death zone. I guess the original idea was to make it feel like a shmup character, so I suppose when you play against him you feel like a shmup enemy getting volleyed by a lot of bullets, the number one wish fulfillment fantasy.

Adrian is ok, I really appreciate that her AI tries to spawn hundreds of bombxes  and eventually tanks the frame rate so much I had to hardcode limit her to 30 (10 on the Dreamcast), the little behind the scenes drama adds to her character, gives her depth.

Thanks a lot again for the in-depth testing and analysis, it was interesting to hear how they play!

I don't have much fighting game experience so I dunno if this normal or not, but the weak attacks feel too effective at stunlocking the AI. I just mash away and the game seemingly can't stop me.

That aside, the whole thing is a trip. Gives me strong BSUJG vibes, which is cool. I like Adrian's design, too.

>The game starts off in 2041, twelve years prior to the main part of the game, in "post-cyberpocalyptic Neo New York". Charles Barkley performs a powerful "Chaos Dunk" at a basketball game, inadvertently killing most of the people in attendance. As a result, basketball is outlawed and many basketball players are hunted down and killed.

I hadn't heard of it before but BSUJG sounds awesome

Yeah, the weak punches completely overwhelm the regular AI. Some of the cheaper AI characters have ways to overcome that, by means of being completely frustratingly broken, but I usually take out their hard AI beforehand (mostly because they frustrate me too).

Thanks for testing and the feedback!

I dunno what to say about it but I played it! It's Mugen at its soul and I dig it.